I completed my first full marathon (the Honolulu Marathon) in December of 2013. It was an incredible experience from start to finish. I had a feeling that I’d run another marathon at some point, but I wasn’t planning on doing another one right away.

In the weeks that followed the 2013 Honolulu Marathon, my running tapered off a bit, as I was in Philadelphia, incidentally experiencing one of the worst winters they’ve had in a long time. Needless to say, I feel bad for runners who live in regions with harsh winters. For most of December and January, I ran 1-2x per week. I certainly wasn’t training for another marathon.

Then I found out that Tricia (my girlfriends mother, who I ran the Honolulu Marathon with) planned on running the LA Marathon, and that some other friends of mine had registered as well.

I was hesitant to commit to another marathon so soon, especially because I hadn’t been training for one. If I signed up for the LA Marathon, I’d have about 6 weeks to prepare. Hal Higdon’s Novice 2 marathon training plan is 18 weeks long, and the LA Marathon was on March 9th.

I decided to ask Hal Higdon himself for some advice. 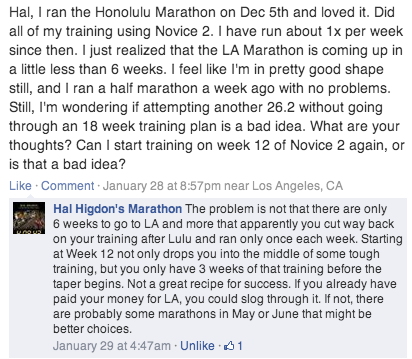 Despite his recommendation, my FOMO got the better of me. I jumped right into week 12 of his 18 week training plan. After 3 weeks of training I felt great, so I signed up for the marathon.

As I continued to train, I put together a new marathon playlist, which you can find at the bottom of this post.

In the weeks leading up to the marathon I did some traveling, but that didn’t stop me from running. I knocked out a 12 mile training run along Kelly Drive/Boathouse Row in Philadelphia. 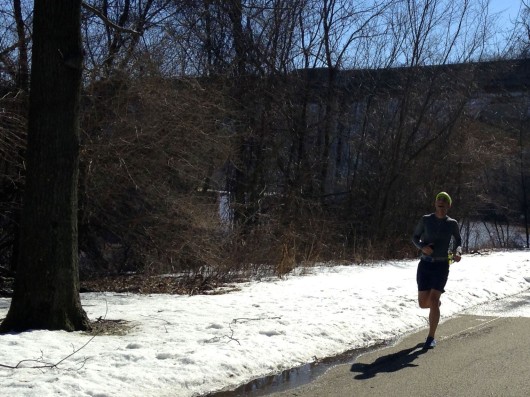 Before I knew it, it was marathon time.

I got little sleep the night before the marathon due to standard pre-race excitement. Tricia and I got up around 4:30 am and took a bus from downtown Santa Monica to Dodger Stadium, where the marathon would begin.

There were some booths setup outside the stadium with bananas, bagels and coffee, but most people made their way inside of the stadium. Even with thousands of racers in there (most of whom were in line for the restrooms) it still felt very empty. It was extremely quiet, and everyone seemed nice and relaxed, probably due to how early it was. 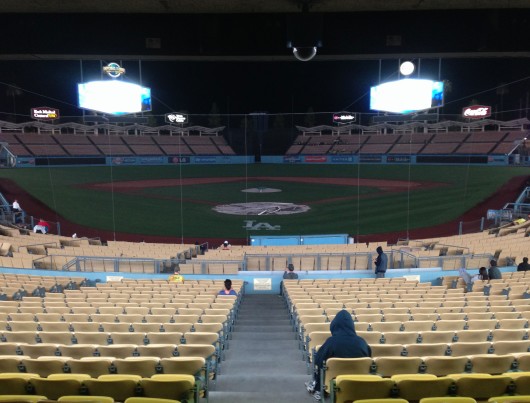 Had I not been guzzling coffee I could have laid on the ground and taken a nap. I saw lots of people doing just that.

As I waited for 7am to roll around, I realized that I wasn’t nearly as nervous as I had been prior to Honolulu Marathon. I had a better idea of what I was getting myself into this time around, and felt much more confident in my ability to run 26.2 miles without issue.

After stretching out for a bit we made our way over to the 10 minute mile starting area. It was ridiculously crowded, to the point where it was tough to move. The seeded corrals were packed to the gills, but I’m beginning to think that this is simply the nature of these larger events. There were 26,000 runners in the LA Marathon this year, and it seems that everyone wants to get as close as possible to the starting line regardless of their goal pace.

Despite this slight annoyance, we were treated to a beautiful sunrise while standing in line.

After the mayor and a few others gave quick speeches, the race began! It only took us about 10 minutes to cross the starting line – much quicker than my experience in Honolulu. 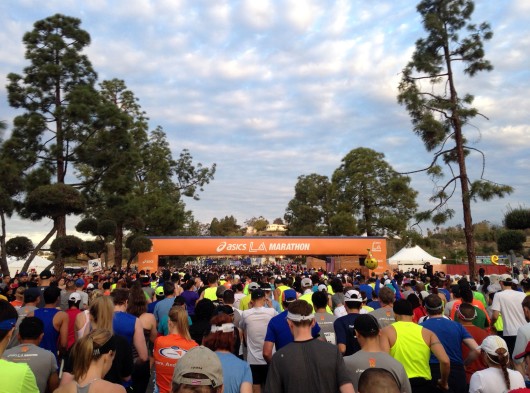 As we made our way down the hill with Dodger Stadium behind us, I felt fully prepared for the 26 miles ahead of me, and was excited to experience my city in a whole new way. 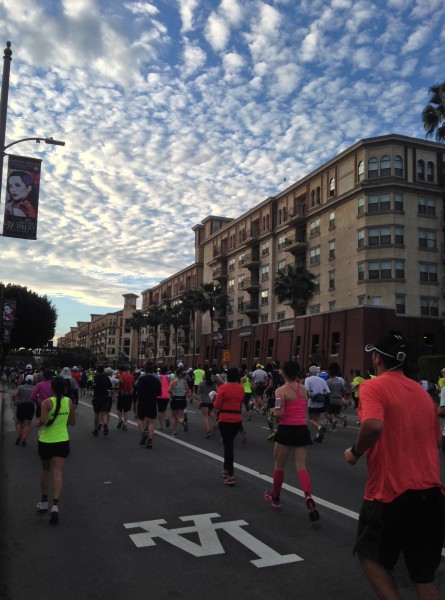 So far, so good. Tricia and I were going strong. 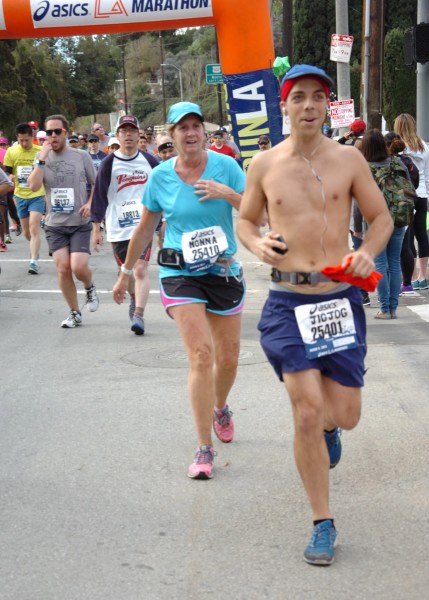 I was still warming up as we made our way into Chinatown, but I was feeling great. 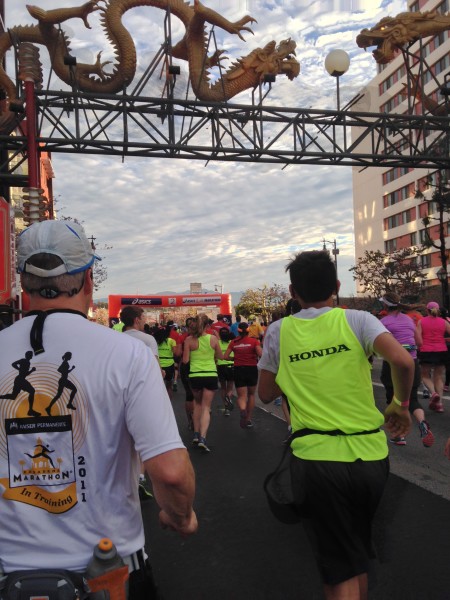 The Walt Disney Concert Hall was the first venue we passed, with many more ahead. Running past these venues was one of my favorite parts about the LA Marathon course, because I have so many great musical memories at each of them.

At mile 5, some awesome people were handing out free chili dogs. I recall several signs leading up to this booth, one of which said “Bad Idea?” I thought this was pretty hilarious, and I saw several runners grab a free chili dog, take one bite, and throw it on the ground.

As we made our way down Hollywood Blvd towards the 8 mile marker, the famous Hollywood sign came into view – you can see it off in the distance here. 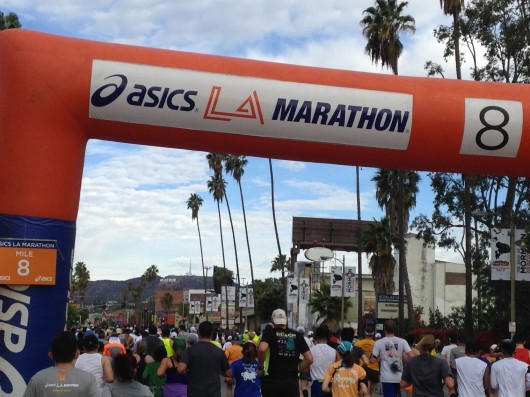 I continued to make my way down Hollywood Blvd. 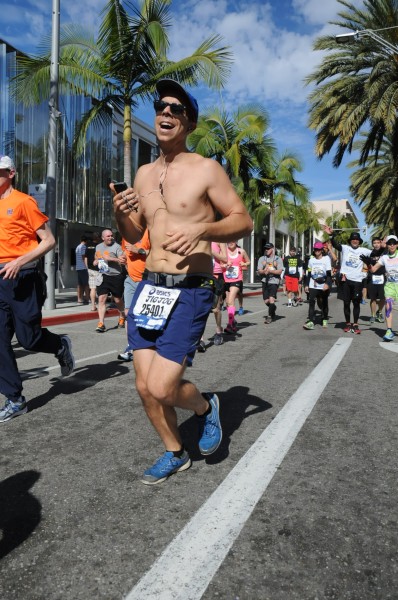 Eventually I passed The Fonda and Pantages Theatre. 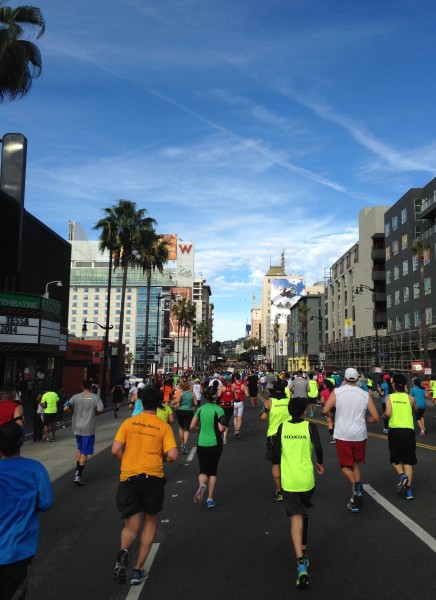 Soon after I turned onto Sunset Blvd I saw a familiar face. Makena was super excited to run with me for a few minutes. 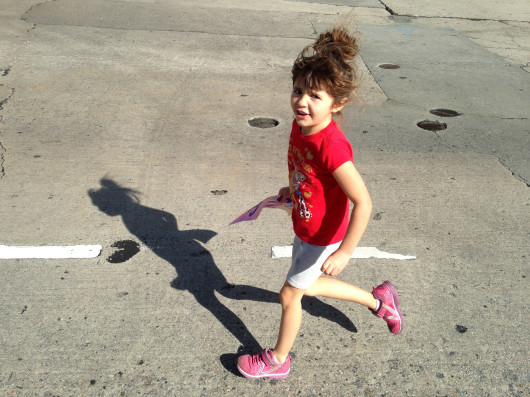 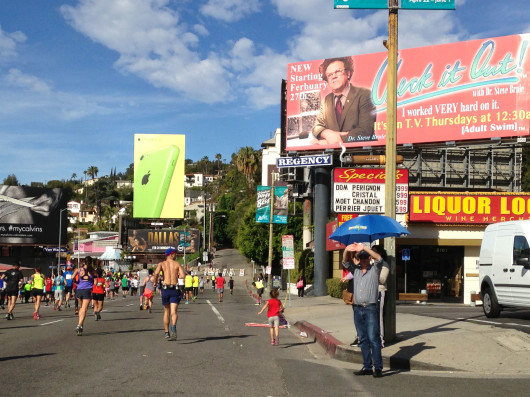 As I made my way down Santa Monica Blvd, I passed my favorite small venue in Los Angeles, The Troubadour. Some of the best shows I’ve seen in LA have been inside this small venue. 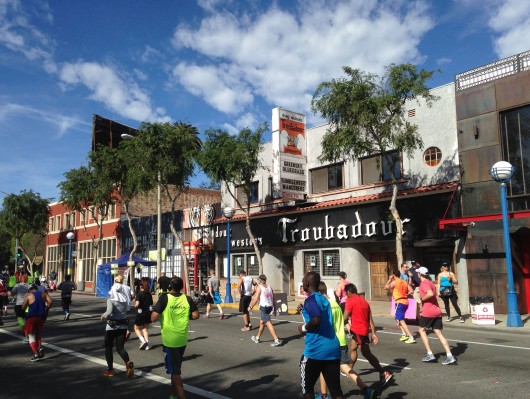 About 18 miles in, I started feeling a bit tired, but I knew that I could keep going. I’d run 18 mile training runs with no issues before.

Luckily I was able to keep my mind occupied with good running music, as well as all of the awesome/hilarious signs that people were holding up. And it wasn’t just spectators who kept the distractions coming – I saw a lot of good costumes/shirts as well. This simple but effective SLAYER shirt was one of my favorites. 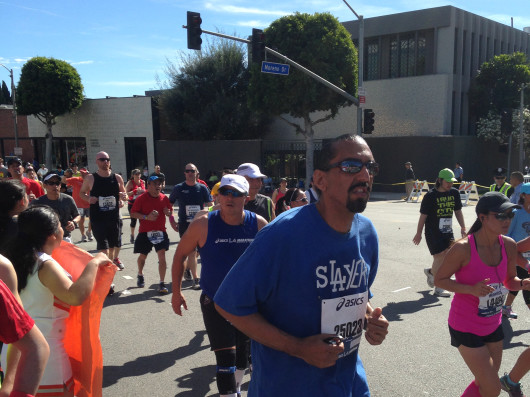 At mile 20, someone was handing out dixie cups full of beer. Who am I to say no to that? While I know that beer isn’t going to speed me up, I knew that with 6 miles to go, I would have no problems finishing the marathon, and after all, I was doing this for fun. Distractions and oddities like this one are what make these events so fun, so why not indulge?

On that note, someone else was giving out slices of pizza around 22 miles in. While skipping the 5 mile chili dogs was a no-brainer, pizza is my kryptonite. I simply couldn’t help myself.

Once I left the Hollywood area and crossed under the 405, I was in the home stretch and heading towards the ocean. From this point on, I concentrated on keeping my body in motion no matter what. I had run training runs on this road dozens of times before, and this time didn’t need to be any different. Even when I felt like I needed to stop and stretch for a minute, I just kept going, even if that meant moving at a slow jog.

As I turned onto Ocean Ave, the finish line came into sight. The crowds grew much larger and my adrenaline was pumping. I was able to increase my slow jog into a respectable running pace.

As I closed in on the finish line, the cheering (and music) grew much louder. It would have been impossible to stop at this point. I felt like a robot; I no longer had control of my body.

I ran across the finish line in 5:07, shaving 10 minutes off of my finishing time from my first marathon 3 months prior.

Once I finished, I was handed a mylar blanket and a finisher medal. The adrenaline wasn’t nearly as crazy as my first marathon, but I still felt incredibly accomplished. I also didn’t feel nearly as wiped out as last time. This is probably because the weather was much more tolerable this time around, as I’m accustomed to running in the Los Angeles climate.

Here’s a shot of me about 5 minutes after I crossed the finish line. I’m not sure why it looks like I have a fake nose in this photo: 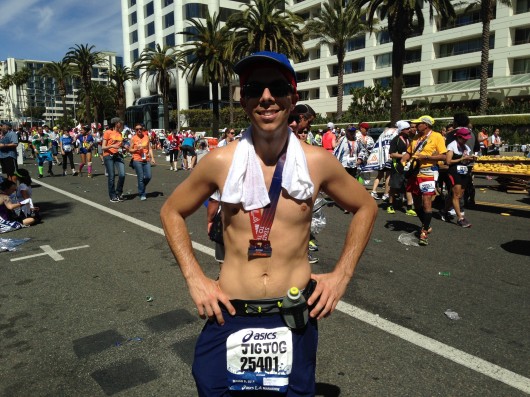 Needless to say, I’m very happy that I went with my gut and made the decision to run a marathon in my hometown. It was an incredible experience from start to finish. My lack of nervousness/intimidation allowed me to enjoy myself and appreciate the experience more fully. I’m also still blown away that I was able to complete a full marathon, not to mention 2 of them within 3 months!

Pound for pound, I enjoyed this race a bit more than the Honolulu Marathon. I also felt that it was organized a bit better. As you can see in the pictures, you ran underneath an enormous arch at every mile. The water stops were more plentiful and seemed less chaotic, and the overall production was better.

So what’s next? I don’t have any full marathons planned at the moment, but Rock ‘n’ Roll Las Vegas looks cool. I’d also love to experience 26.2 miles of New Orleans on foot. Maybe I’ll go experience another country via marathon? I’ve come to terms with the fact that, injuries withstanding, I’ll likely continue to participate in these events for the rest of my life. I am planning on running the Beachfront Half Marathon in Ventura on June 7th as well. Come to think of it, that’s next weekend!

Here’s the playlist that I listened to during the 2014 LA Marathon. I didn’t spend nearly as much time working on this playlist as I did on my 2013 Honolulu Marathon playlist, so the tracks don’t flow quite as well, but it did the trick, and it’s still a solid playlist. If you’re looking for more running music, check out my Disco Biscuits Workout Mixes roundup.