The 2019 Honolulu Marathon: From Death Valley to Hawaii 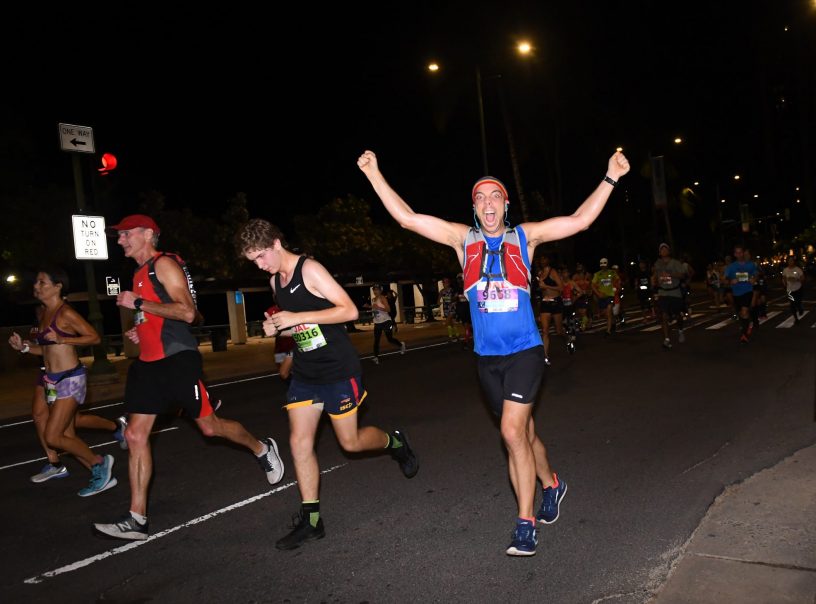 I ran my first-ever marathon in Honolulu back in 2013. In retrospect, I had no idea what I was doing. 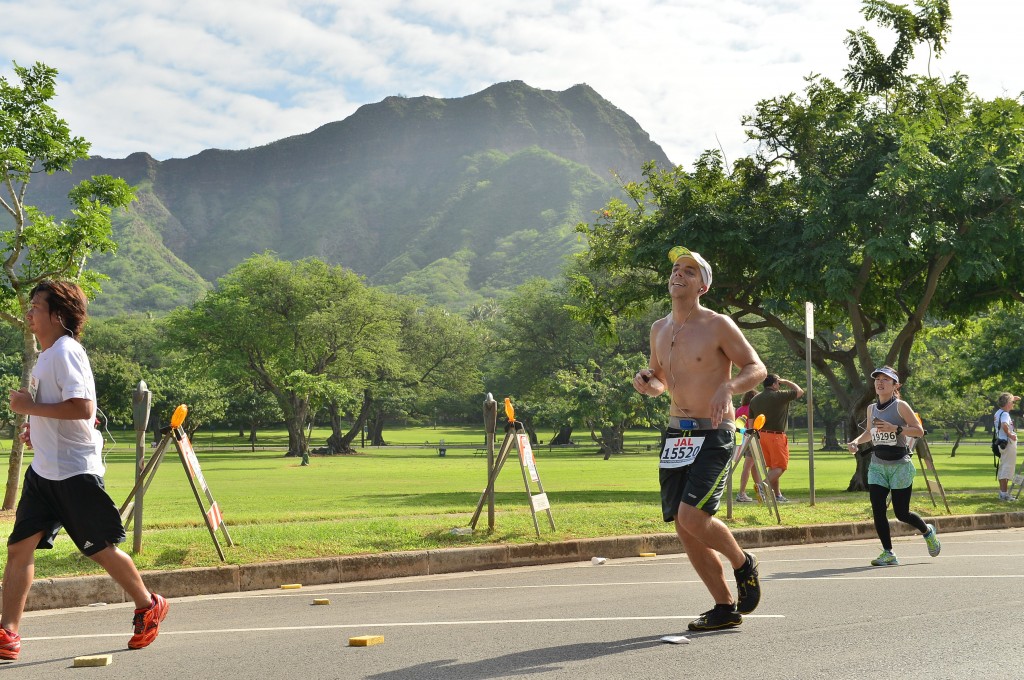 Since then, I’ve run quite a few races, as well as my first 50k last year. Things that once seemed impossible to me are now just a matter of proper discipline and planning.

I’m pretty selective with the races I sign up for these days. Time is such a commodity, and if I’m going to spend 4 months training for a race, the course itself had better be an experience.

Enter the Death Valley Trail Marathon. This one checks all of the boxes for me: it’s a place I’ve never been before (and have always wanted to visit), it’s on interesting terrain, and it’d be my first trail marathon. Even the name sounds intense! I was all-in on Death Valley as soon as I heard about it.

I started my marathon training back in September, and knocked out all of the long training runs, despite a busy schedule and lots of work travel. It wasn’t always easy, especially because the training plan was more about elevation gain than it was about mileage. Neighborhood/beach runs weren’t going to cut it for Death Valley.

I was knocking out 1-2 longer trail runs each week and becoming more familiar with the local East Bay trails in the process. When daylight savings rolled through, I got into a routine of early morning runs, hitting the road around 5am to beat traffic to various trailheads. I discovered the magic of solitude before sunrise on the trail. 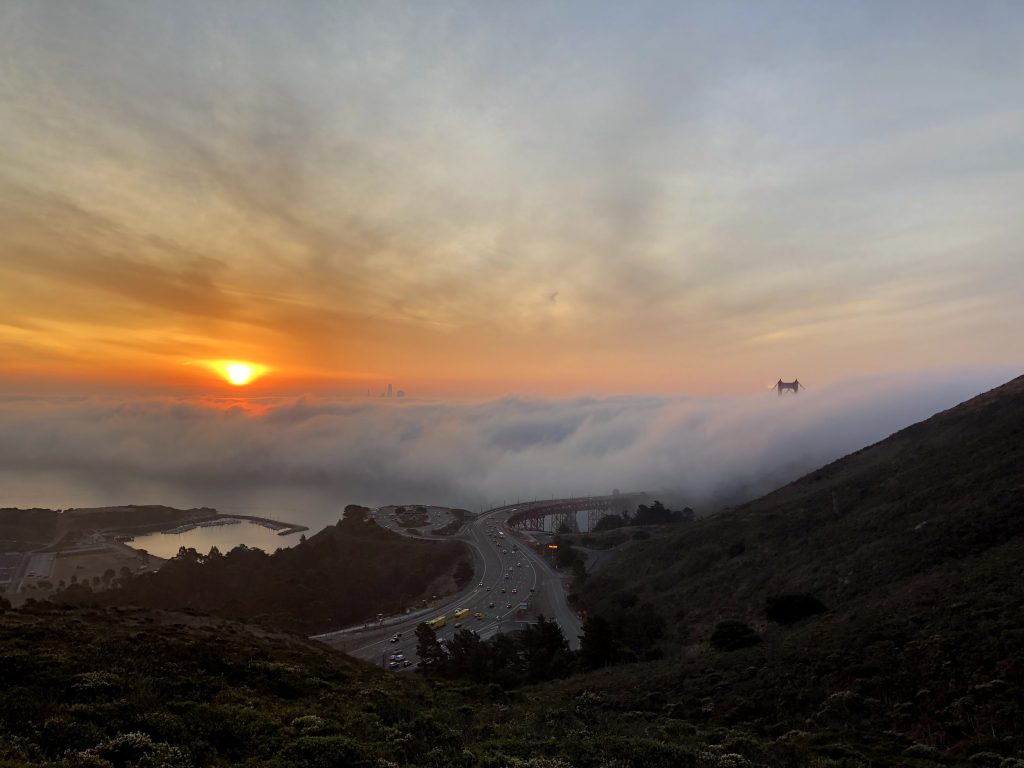 Sunrise from the trail in Sausalito, Nov 2019

Come November, I was feeling very prepared for the marathon. I was satisfied with my adherence to the training plan and had some awesome pre-race confidence.

I was tapering and preparing to ring in my 36th birthday with a crazy race in a crazier place… and then I received an email from the race organizer:

I was crushed! I knew this was a possibility, but I figured it wouldn’t happen to me.

What was I going to do? I didn’t want all of my training to “go to waste”, but had a crazy calendar for the remainder of 2019. Finding a comparable replacement race in the 11th hour didn’t seem likely.

Once I started to put things into perspective, I snapped out of it pretty quickly. This must have been a tough decision for the organizers. Other people probably had non-refundable travel plans coming from much further distances.

My wife told me not to worry about the upcoming weekend, and that she’d arrange something else as a birthday surprise.

I was in the dark on her plans, but she told me 2 things about the weekend: you’re still running a marathon, and we’ll be boarding a flight to get there. She did all of the packing for the trip, so I had no idea what type of climate we were headed into.

It wasn’t until we checked our bags at the Southwest terminal that I realized where we were headed: Honolulu!

I would have never guessed that we were about to board a flight to Hawaii. The lady at the ticket counter took great joy in our interaction once she realized what was happening.

The Honolulu Marathon was my first 26.2  way back in 2013. I never thought I’d come back and do it again. I was pretty excited to revisit this event with a few years of running experience under my belt.

I had planned to purchase a last-minute race bib at the marathon expo, but they were charging $380 for in-person registration. Luckily, Craigslist saved the day. 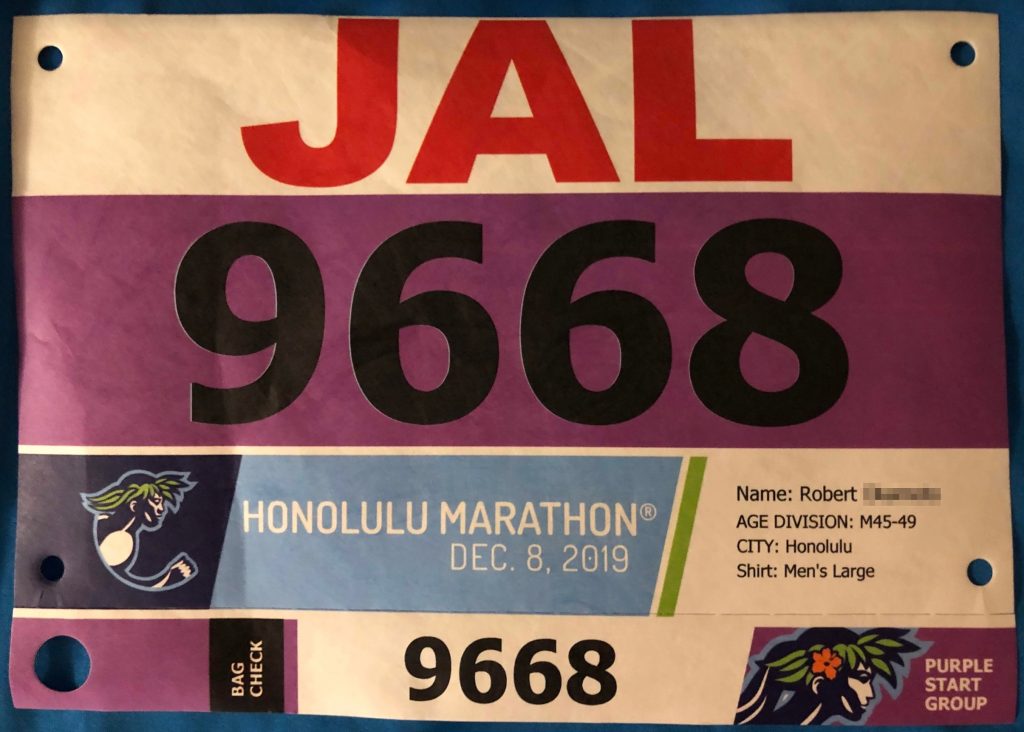 Fast forward to December 8th, the morning of the marathon. I woke up feeling like Robert, a mid-40’s Honolulu resident.

Our hotel was just over 2 miles from the course, so rather than waiting for a shuttle, I warmed up by jogging to the starting line. It’s crazy how humid it was at 4am. 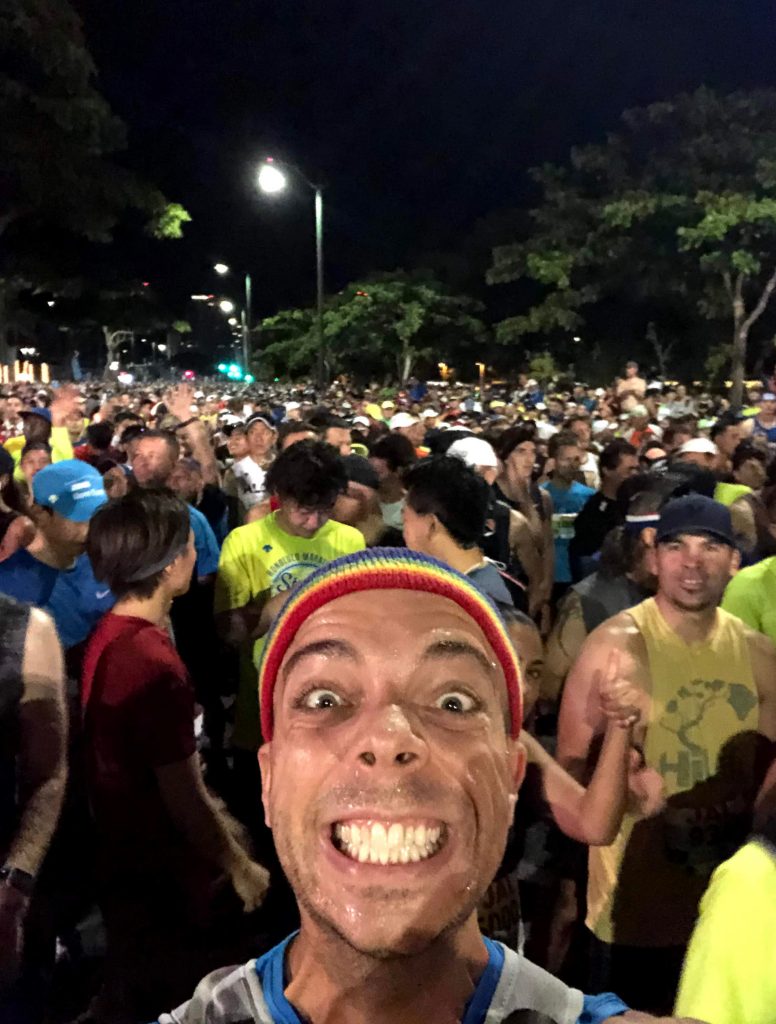 I’m not used to being this sweaty before a race begins.

The last time I ran this race, I started near the back of the start corral, which meant I spent the first 2-3 miles of my race dodging endless groups of selfie-stick enthusiasts. That was a frustrating experience.

I made my way up as close to the front as possible this time to avoid dealing with that again. 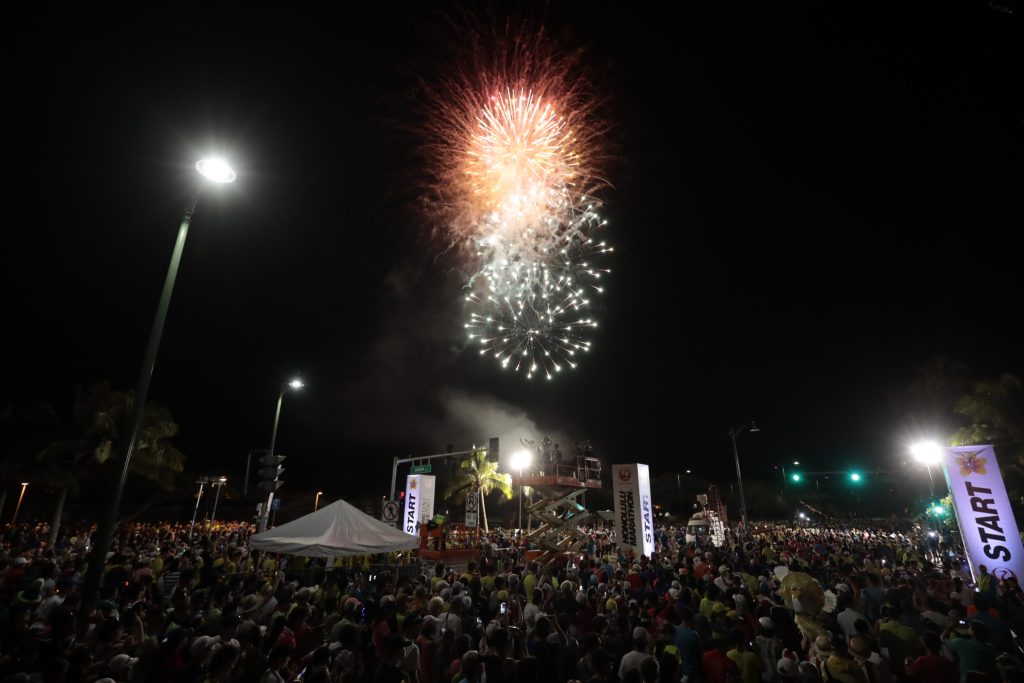 About 3 miles into the race, I was settling into a groove and feeling great. 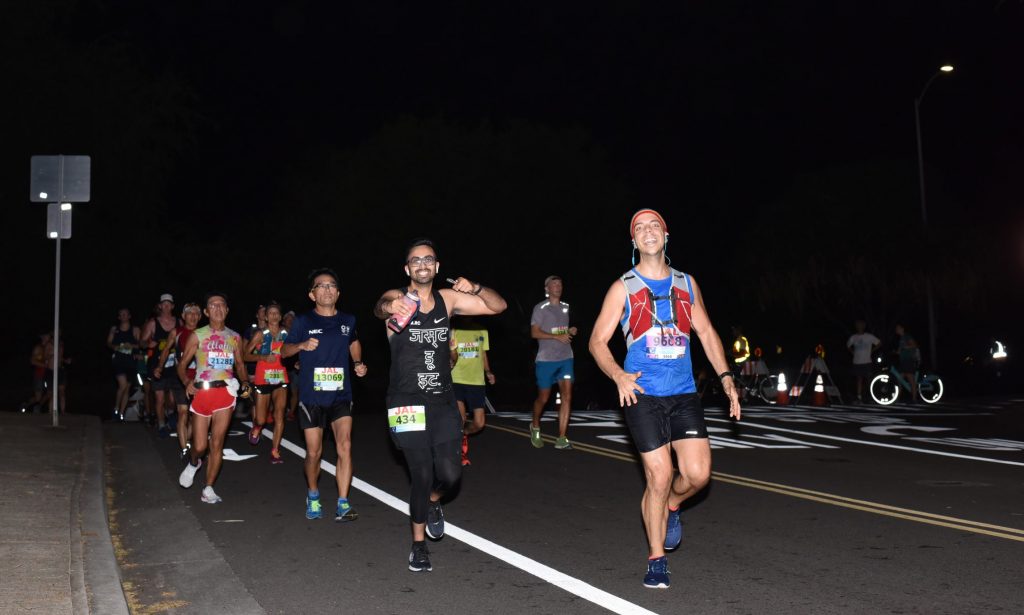 I had been keeping an eye out for pacer groups, but hadn’t spotted anyone carrying signs yet. I wished that I knew where the 4 hour marathon pacers were, as that was my rough goal for this race – to finish under 4 hours. Again, I hadn’t trained for speed at all, as I thought I was running a trail marathon with 2500 feet of elevation gain in the first half.

After wondering where the pacing groups were, I looked up and realized that the 4 hour pacers were right in front of me! 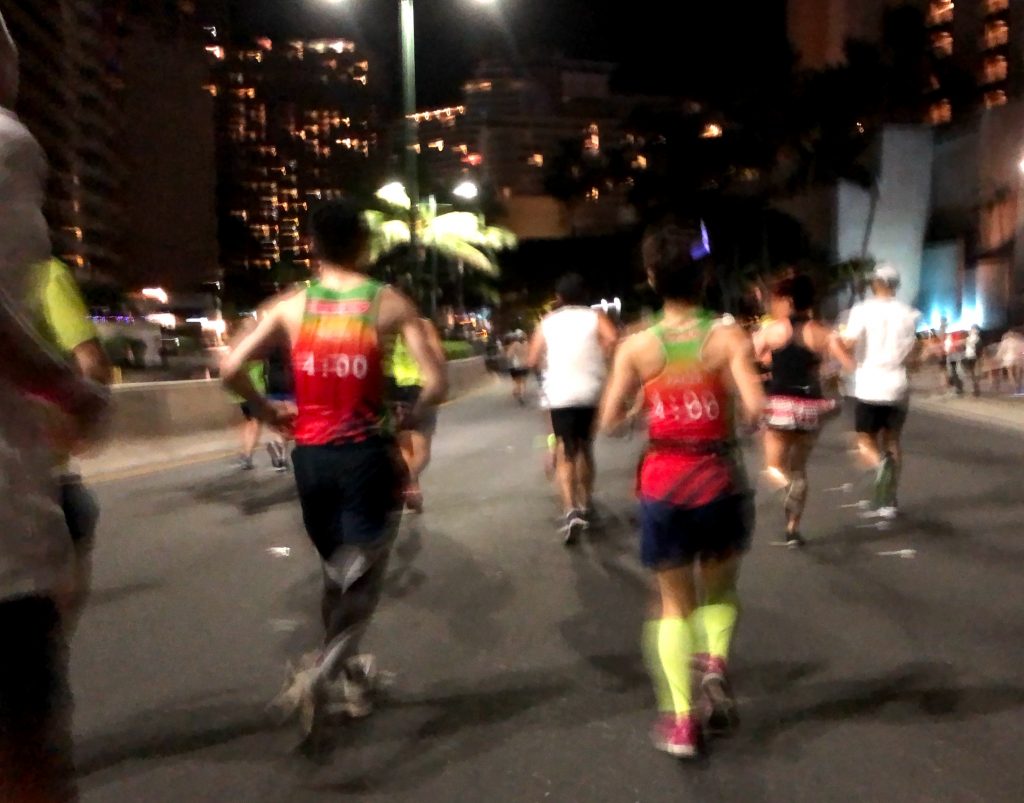 I was pretty excited about this development because it meant that I could turn my brain off and ignore my pace. As long as I had those pacers in my sight, I knew I was doing fine. One foot in front of the other.

For the next hour or so, I kept myself entertained and motivated with lots of high fives, smiles, and general enthusiasm along the route. I was in a fantastic groove and absolutely loving the experience.

Around 9 miles in, there’s a small climb (~120 feet). I noticed some folks struggling with the elevation, but I got a real confidence boost here and actually sped up a bit. I had spent the last 3 months training for elevation, so this was my time to shine! 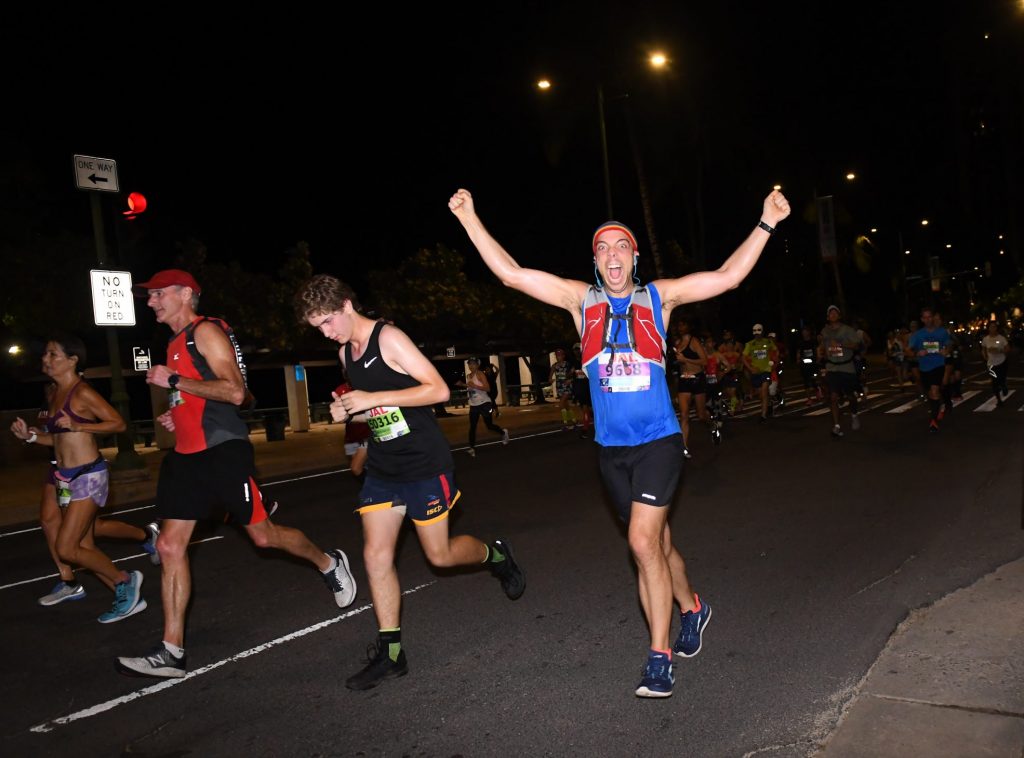 The sun started to rise around 6:20am. I know this because it’s when I took this shaky sunrise selfie. 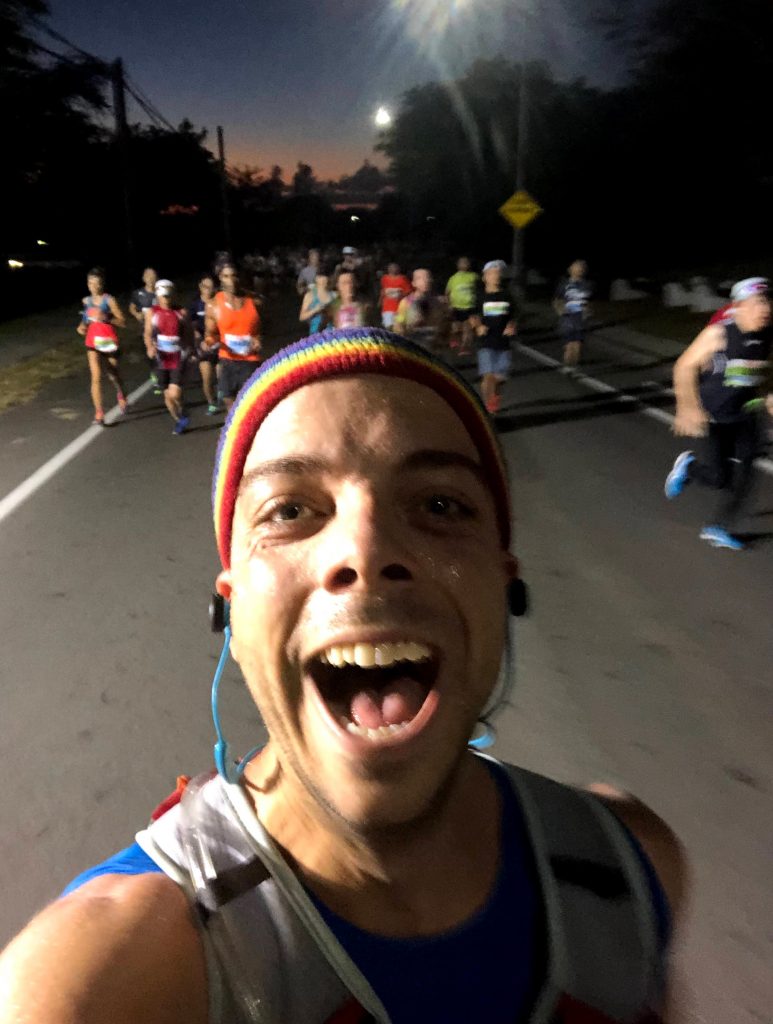 A shaky selfie at sunrise

When I last ran this race in 2013, I was struck by all of the crowd support and great signs along the course. I found this to be true again in 2019.

Out of all the clever signs I saw, I was most entertained by the cautionary “this is vaseline, DO NOT EAT” signs at the aid stations. I can only imagine how many unsuspecting runners grabbed a popsicle stick and choked down a big glob before realizing it wasn’t race fuel, thus necessitating the creation of these signs. The whole scenario cracks me up. 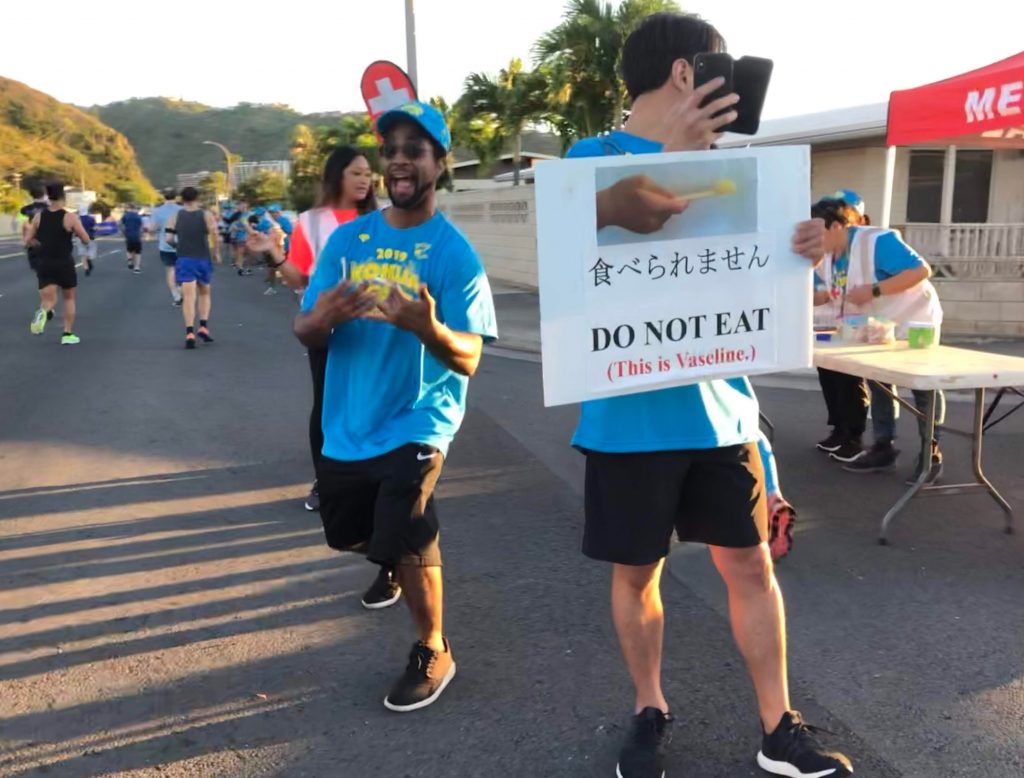 The “mental games” didn’t start until around mile 20 for me. The temperature was climbing, the sun was beating down, and despite drinking lots of water, I was feeling extremely dehydrated and weak.

I vividly recall the mental struggle I experienced back in 2013. It started much earlier in the race: my brain was giving me reasons to stop running, and more often than not, I’d listen to them. “You’re right brain, I should just stop and walk for 30 seconds.”

I’ve come a long way as a runner since then, but I still experience some form of this struggle on my longer runs. It’s more clear to me now that the challenge of running is mental as much as it is physical. I’ve gotten better at identifying that nagging voice of doubt and keeping it at bay, but it is still undeniably present. This time around, I was thinking “it’s not your name on the bib, so it’s not official and the results of this race don’t matter. You can walk for a bit.” 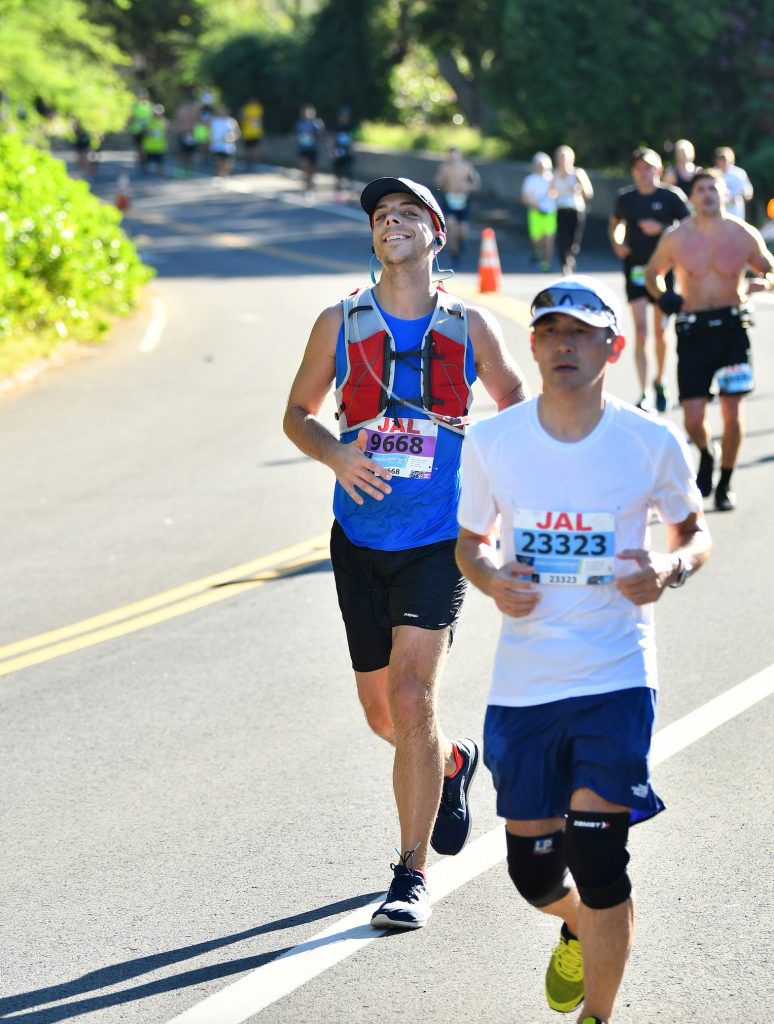 I was able to push through for awhile, but I started to walk for 30 seconds or so at each water stop.

I did this intermittently until the 24 mile mark, and then convinced myself to just suck it up for the final two miles.

I was struggling hard at this point, but once the finish line came into view, I went into autopilot. 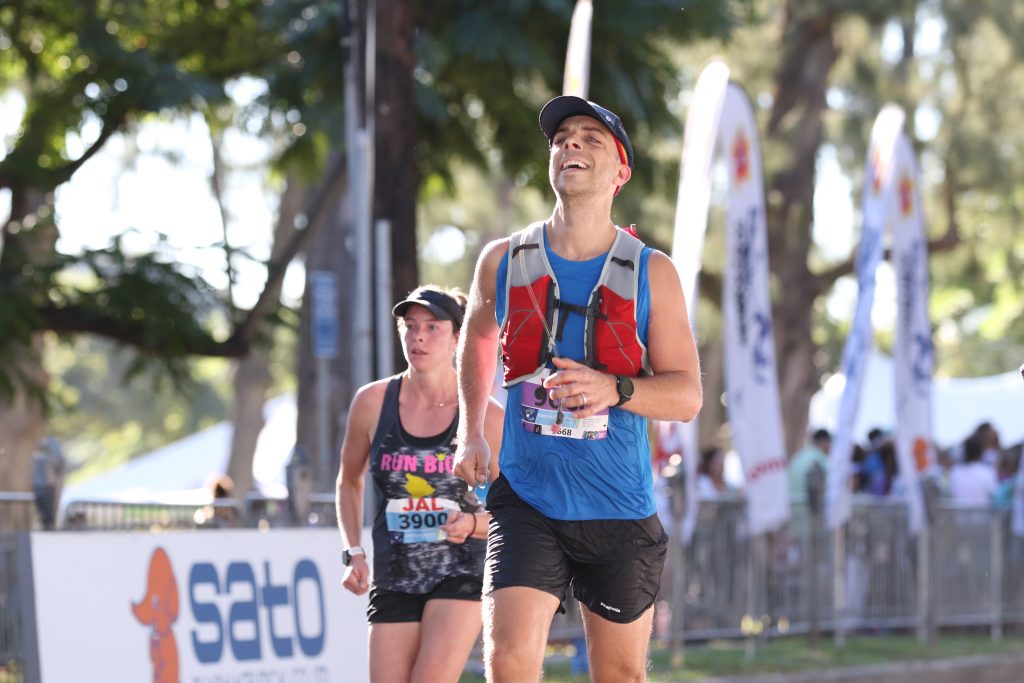 Somehow, despite feeling completely drained, I was able to muster up the strength to pick up my pace for the final minute or so. A marathon is more of a personal challenge for me than a competition against others, but there’s something undeniably satisfying about passing a few people in the final stretch of a race. 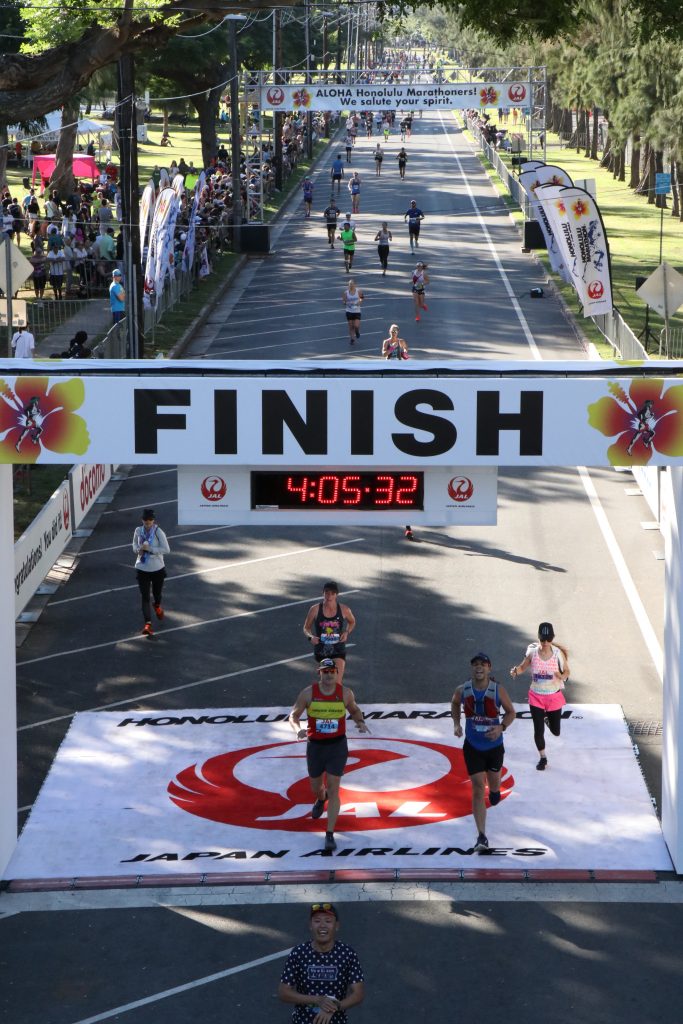 The finish line at these longer races is always emotional for me. It’s the culmination of months of hard training, the endorphins from a serious workout, and the learnings from some inevitable introspection along the way, all swirling together and coming to an explosive peak. I saw my wife as I crossed the finish line and couldn’t hold back the waterworks. 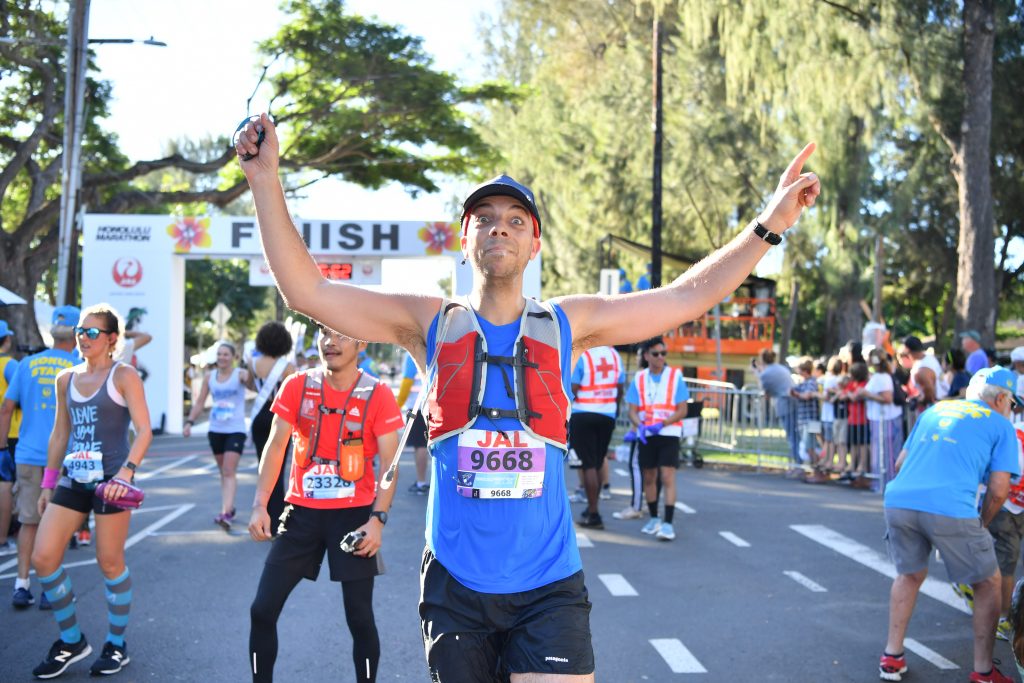 We hung out in the finisher’s area for a bit as I stretched out and enjoyed a cold beer. 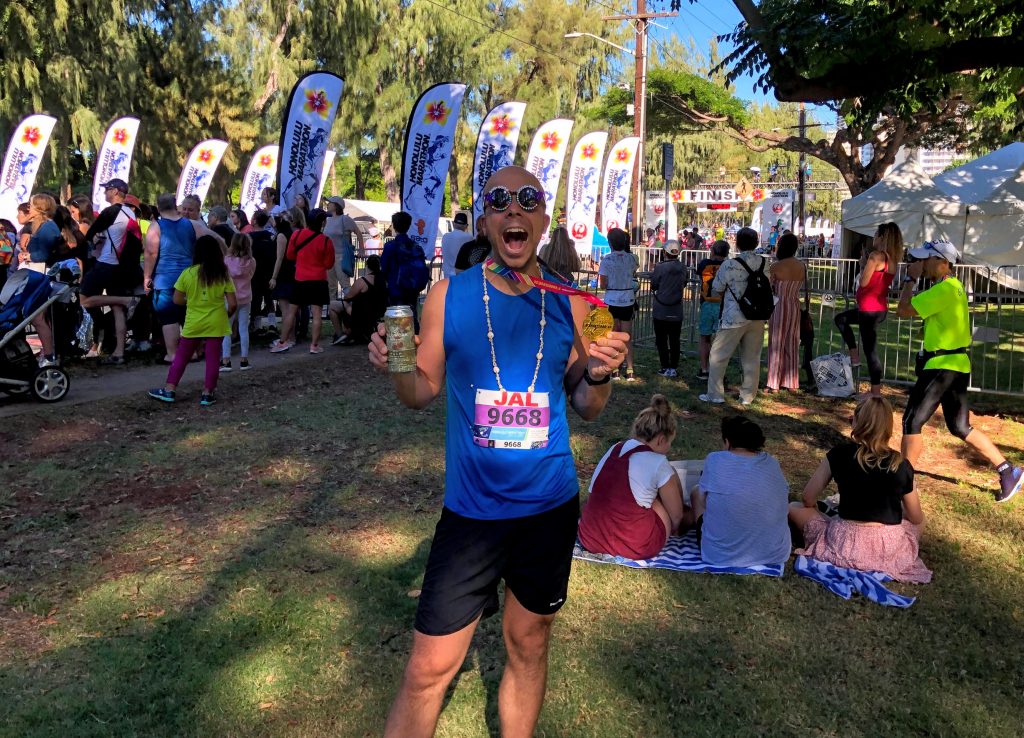 A post-marathon Pulp IPA from Fieldwork, all the way from Berkeley

We spent the rest of our trip in the North Shore. We kayaked at sunrise in Kaneoho Bay, watched some of the Pipe Masters surf competition at Banzai Pipeline, and caught some fantastic sunsets. 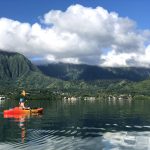 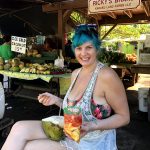 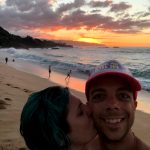 I’ve done some reflecting on this entire turn of events. While my training for Death Valley was very specific to that course, none of it was “wasted”.

I enjoyed every single trail run while training, and I’m grateful for the motivation provided by the event, even though it didn’t work out. I’ve become more disciplined with waking up before the sun to hit the trail, and have had some incredible experiences as a result. 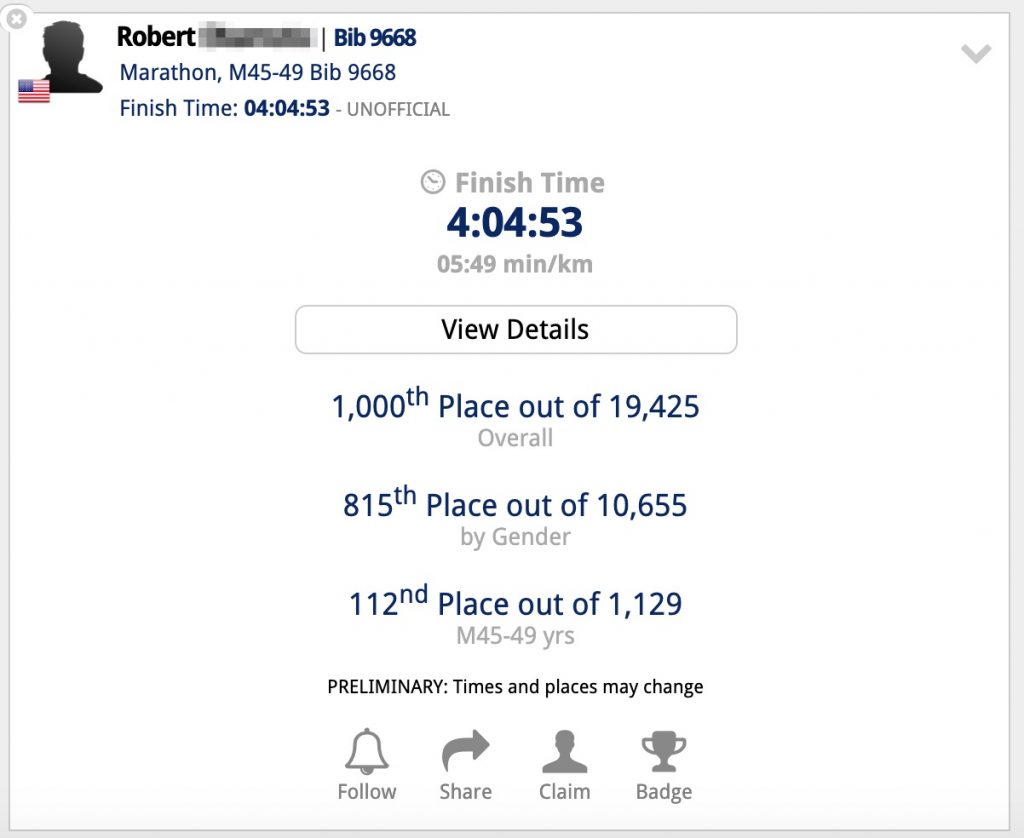 I didn’t break the 4 hour mark in this race, and I’m okay with that. The humidity was relentless, and I wasn’t training for a 4 hour marathon. Running a 50k at Burning Man felt easier than running 26.2 in Hawaii humidity. This was still my fastest marathon yet, and I’m confident that my next one in a reasonable climate will be under 4 hours.

I’m also registered for the 2020 Death Valley Trail Marathon. I will have my redemption!