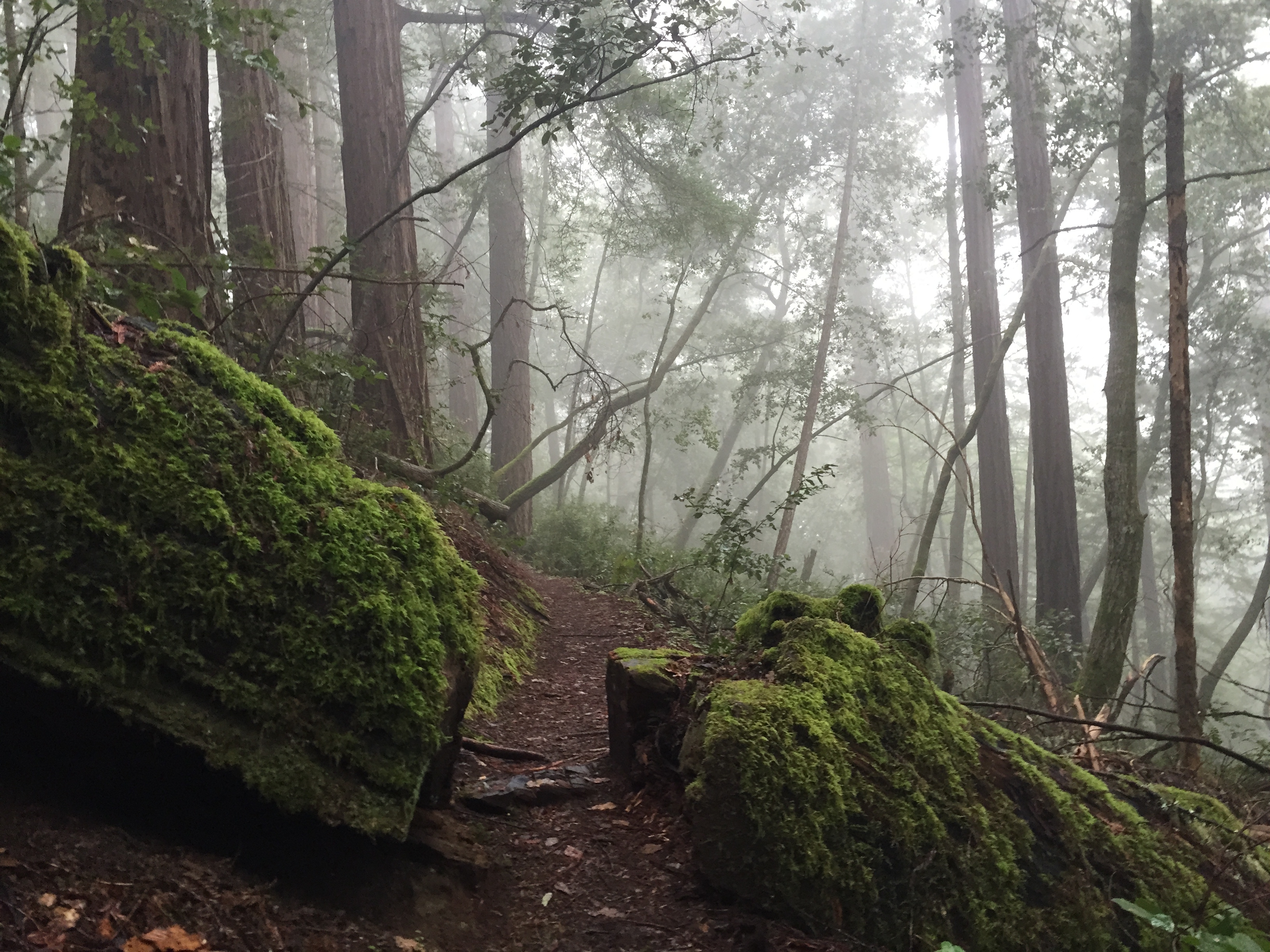 It recently dawned on me that I hadn’t been on a single backpacking trip so far this year, and the year is almost halfway over… So I decided to change that. 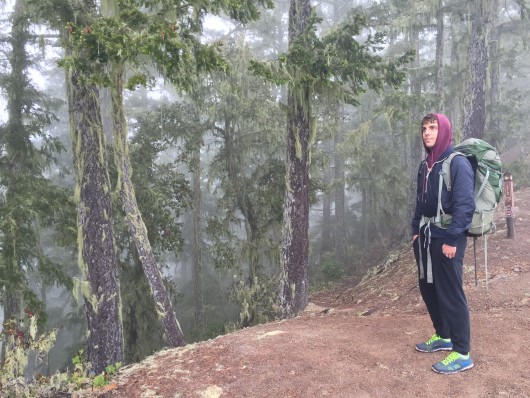 Three weeks ago, my brother and I did a one night backpacking trip in Butano State Park. It was about a 13 mile loop – roughly 6 miles to the campsite, and 7 miles back out.

The park is located in the Santa Cruz Mountains. It’s beautiful terrain – a lush forest full of redwoods (as well as oaks and pines), newts and banana slugs.

I chose Butano because I wanted to secure a backcountry campsite, and this was the first Bay area-accessible park that wasn’t all booked up for Memorial Day weekend.

There’s plenty of information about the park out there, but I couldn’t find a good map online, and backpacking/camping information was sparse, so I’m putting this post together this to help others who are looking to plan a similar trip. I took a high-resolution photo of the map from the visitors center as well, so hopefully that’ll help someone out: 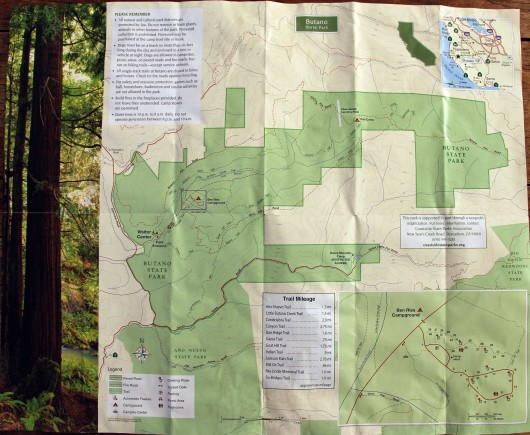 I drove up to San Jose the night before our trip. I laid out all of our gear and got everything ready so that we could leave for Butano the following morning. 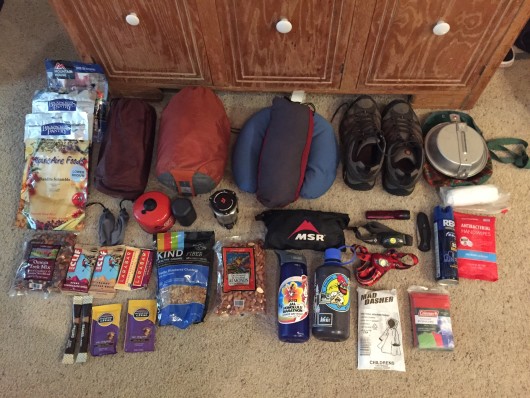 Laying out our food and gear the night before. Packs and tent not pictured.

The drive from San Jose to Butano State Park was great. It was awesome driving down La Honda’s winding tree-lined roads, and cruising down the PCH never gets old. 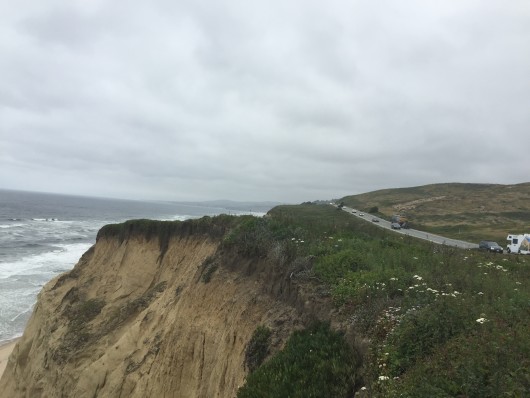 From the visitors center, we started our hike on Jackson Flat Trail. There was a sign posted about wasps, so we took note of that and then started our gradual ascent. 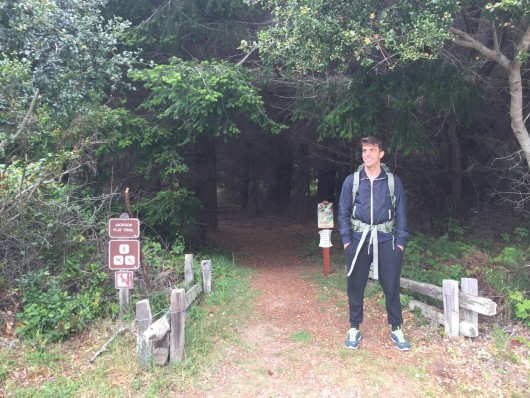 There were banana slugs everywhere along the trail. The majority of my hiking in California has been in the Angeles National Forest, so these little guys are still a novelty to me. 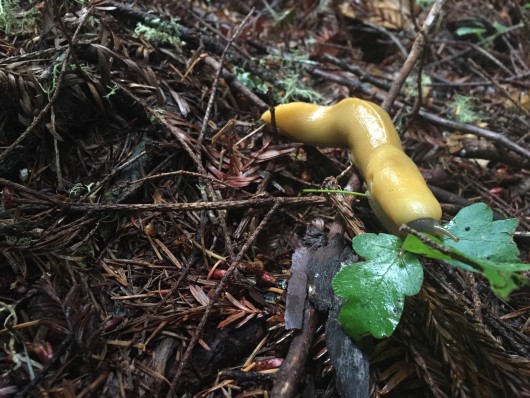 The trail offered some pretty interesting terrain, with some cool bridges and the like. 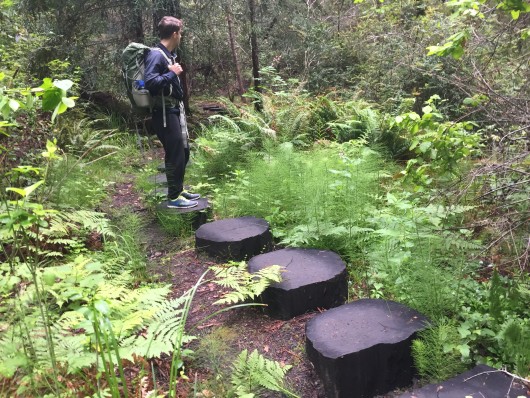 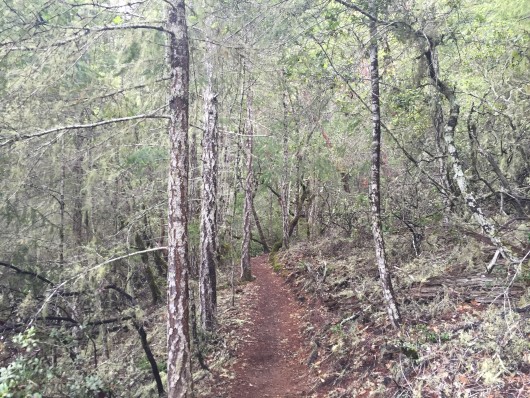 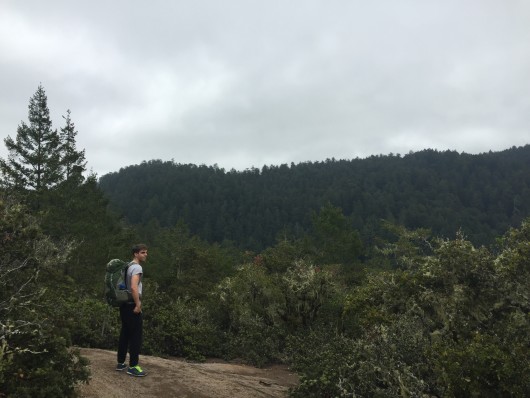 We eventually came to a fork and then got onto the Canyon Trail. 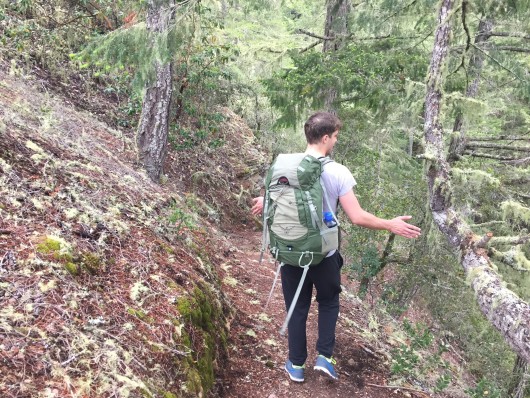 The Canyon Trail eventually lead to another fork, and we stayed to the left and headed uphill towards the Trail Camp. 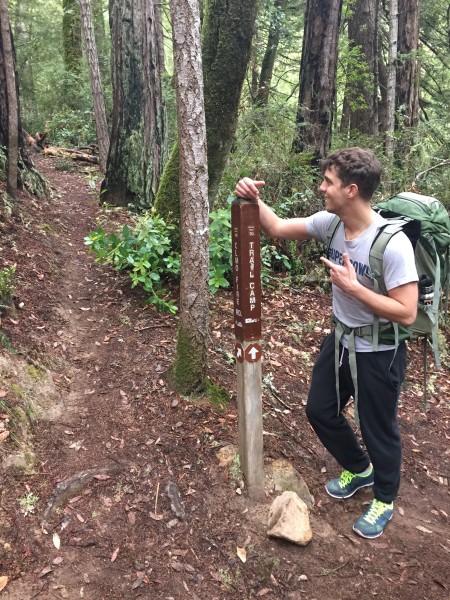 We were moving it a very casual pace, and stopped several times along the way just to enjoy the view, but I’d estimate that it took us about 4 to get from the trailhead to the trail campsite.

There were 8 different campsites. They were all pretty secluded; there was more than enough space from site to the next. There’s also an outhouse there, if you’re into that sort of thing. 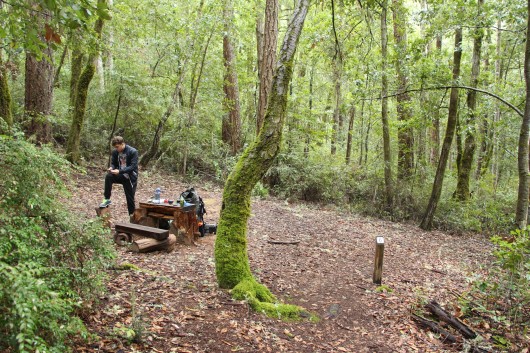 First order of business was obviously to get some food going. I busted out my trusty MSR “PocketRocket” backpacking stove and fired up some curry. 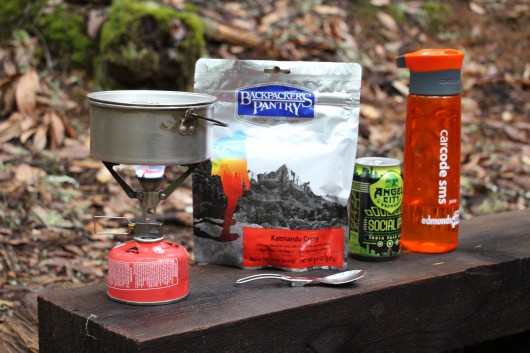 It’s crazy how even a relatively short hike can amplify your appreciation of what might otherwise be mediocre-tasting food. I suppose the same goes with beer – a cold beer after a hike tastes so much better than a beer in most other contexts.

We got the tent set up as the sun started to go down. 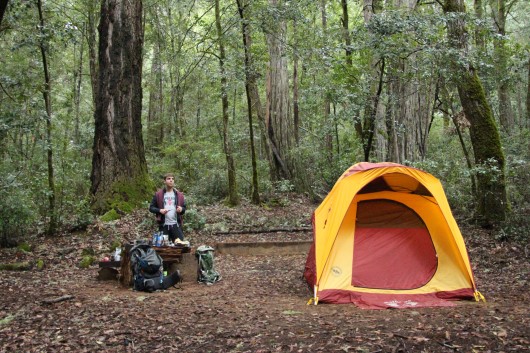 Rather than bringing my small (2 person) tent, I brought my Big Agnes “Big House 4” tent. It’s definitely not a backpacking tent, but with the components split between 2 people it was easy to carry with us and allowed us both plenty of space. 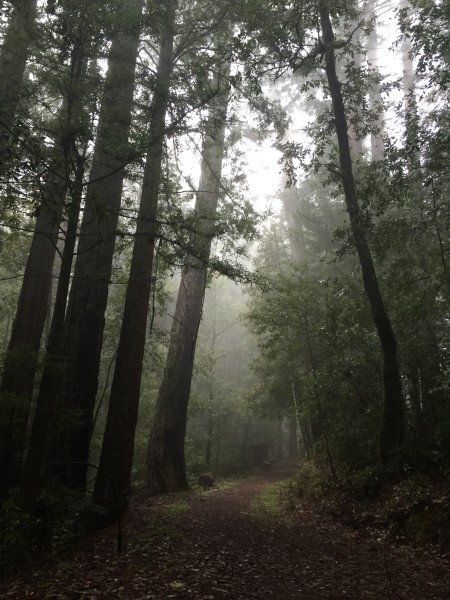 I fell asleep to the to the rain and the distant sounds of our neighbor playing bluegrass guitar, which was quite pleasant. The rain continued all night and into the morning.

We woke up to an even thicker layer of fog, which was eerie and awesome. 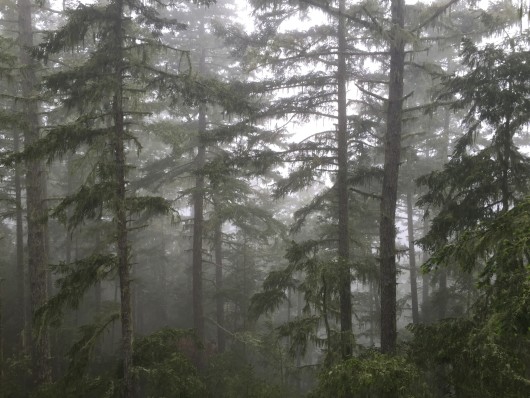 We packed up the soaking wet tent pretty quickly… 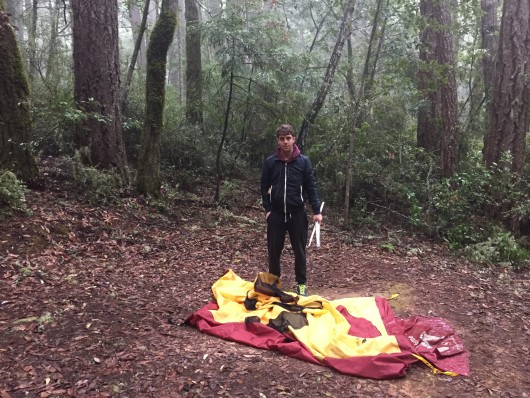 …And hit the misty trail! 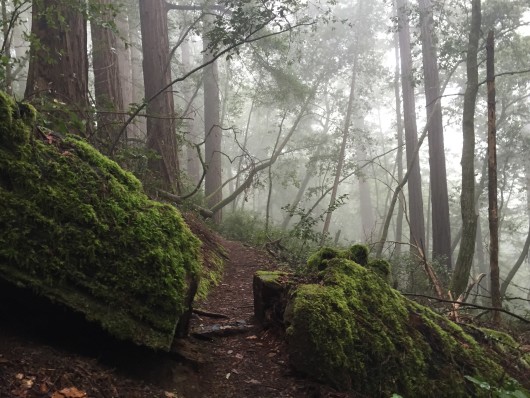 From the campsite, we came back down Indian Trail and then took a hard left to continue where we left off the prior day. We stayed on Indian Trail until we hit Olmo Fire Road. 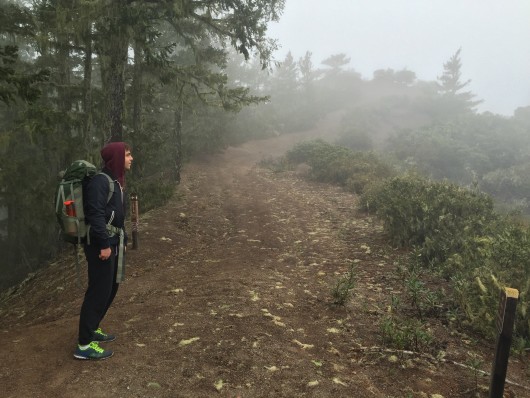 We were basically doing a big loop, so everything we saw on our way out was new to us.

From Olmo Fire Road, we took a right onto Doe Ridge Trail, and then a left onto Goat Hill Trail. Goat Hill provided some excellent views and had a few nice rest stops with benches. 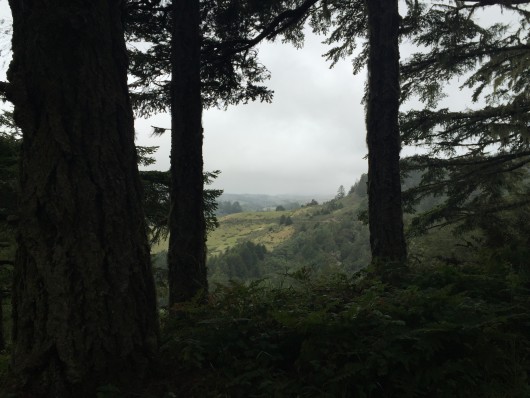 At some point on Goat Hill we were put back onto Olmo Fire Road momentarily, but we continued straight and eventually got onto Año Nuevo Trail. We took Año Nuevo all the way back towards the visitor center. Near the end of the hike, you come across a bridge over a small creek. The bridge takes you back to the visitor center – if you walked past the bridge and stayed on the path, you’d end up on Six Bridges Trail which leads to Ben Ries Campground. 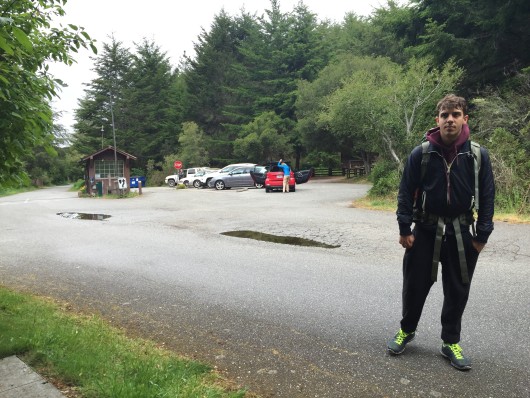 We managed to make it from the campsite back to the car in about 2 hours, because there was a good bit of downhill on the last section of the trail.

We did a clockwise loop beginning on Jackson Flats trail, which turned out to be easier in the end. Going clockwise results in a gradual ascent (with just a few challenging uphill sections) whereas starting on Año Nuevo trail (and going counter clockwise) would have packed a lot of steep climbing into the first few miles.

This was a nice relaxed hike, and I’d definitely recommend it to someone looking for a “beginners” backpacking trip. Be aware that there are wasps along the trail – we both got stung! There’s also poison oak along the trail, and I’m stopping between typing sentences right now to scratch my legs… Be careful!

There was no running water when we hiked Butano, but this may change. It’s worth calling the ranger station ahead of time (650-879-2040) to inquire about the water levels.

I plotted my trip out using the map on RedwoodHikes.com, but the map they gave me at the visitors center is a lot easier to work with. Here’s a version where I highlighted the path that we followed: 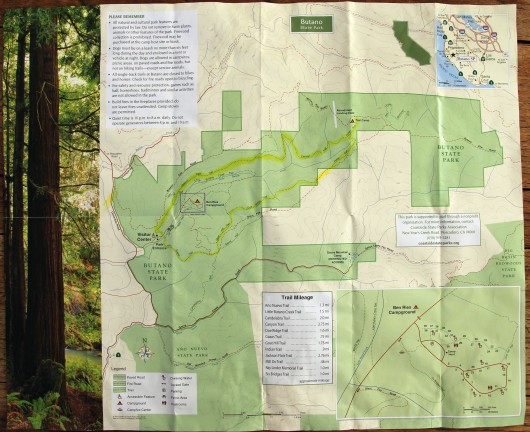 Here’s a version of the trail map with our trip highlighted.

I realize this isn’t the most printer (or screen) friendly format, but it’s better than nothing! Hopefully it’s helpful for you if you’re planning to do some Butano State Park camping or backpacking.

Finally, here’s a shorter version of our itinerary:

Get on Jackson Flats Trail from the visitors center. Come to fork, stay to the right for Canyon Trail. Stay to the left and take Indian Trail uphill to Butano Trail Camp – roughly 6 miles.

From Butano Trail Camp, come back down Indian Trail, and be sure to take a hard left at the junction to stay on Indian Trail (you’ll see a sign post). Stay on Indian Trail until you hit Olmo Fire Road. Take that until you come across a sign post, at which point you’ll take a right to stay on Doe Ridge Trail. Take a left onto Goat Hill Trail. At some point you will momentarily be back on Olmo Fire Road, but stay straight and it’ll put you on Año Nuevo Trail. Take that back to the visitor center. Near the end of your hike, you’ll come to a small creek and a bridge. Cross the bridge to get back to the visitor center, otherwise you’ll end up on Six Bridges Trail which leads to Ben Ries Campground – roughly 7 miles.