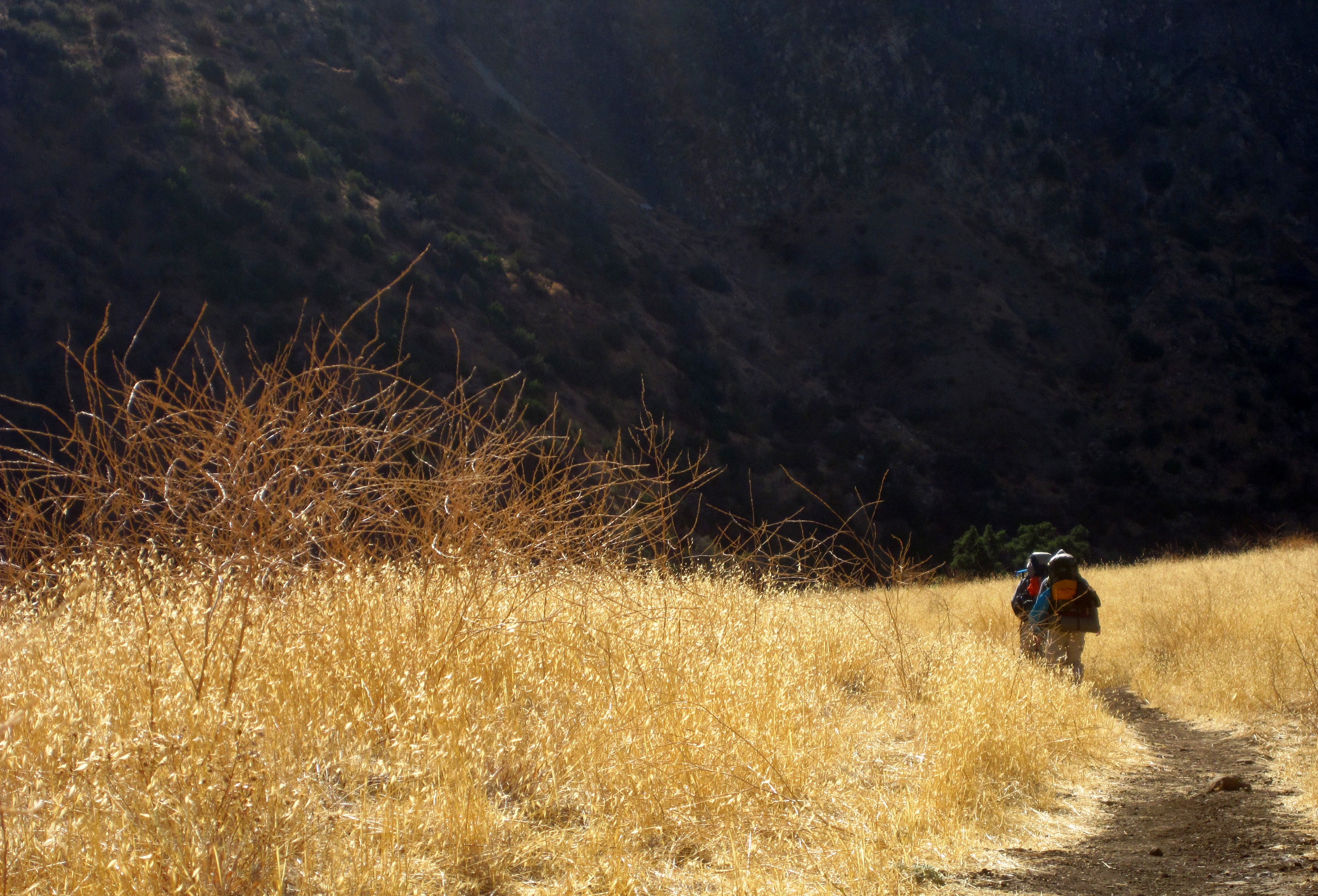 The seemingly endless grassland plains of the Sespe Creek Trail in Ojai, CA

Two of my roommates and I recently did an overnight backpacking trip along the Sespe Creek Trail, and I took a bunch of pictures. I think some of them turned out kinda cool. 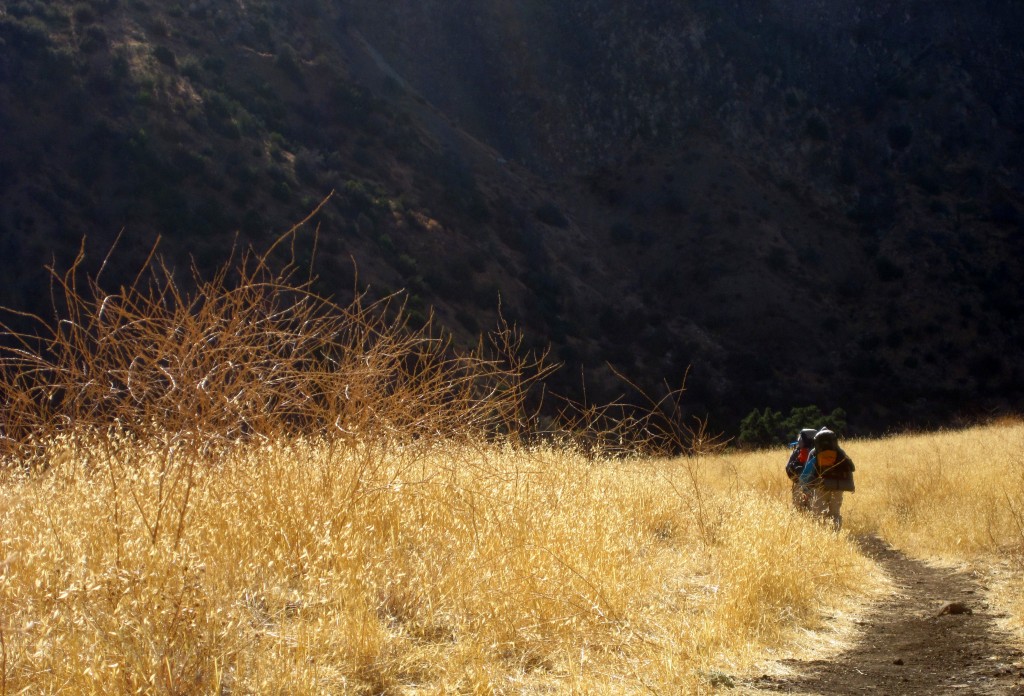 The seemingly endless grassland plains of the Sespe Creek Trail in Ojai, CA

Our original plan was to do a car drop and then backpack from Gene Marshall to Piedra Blanca, but an inclement weather forecast (including temperatures in the 30s, rain and snow) had us exploring other options. We decided to do Sespe Creek instead – the lower elevation seemed like a better bet, since none of us really have the gear for camping in the freezing cold. 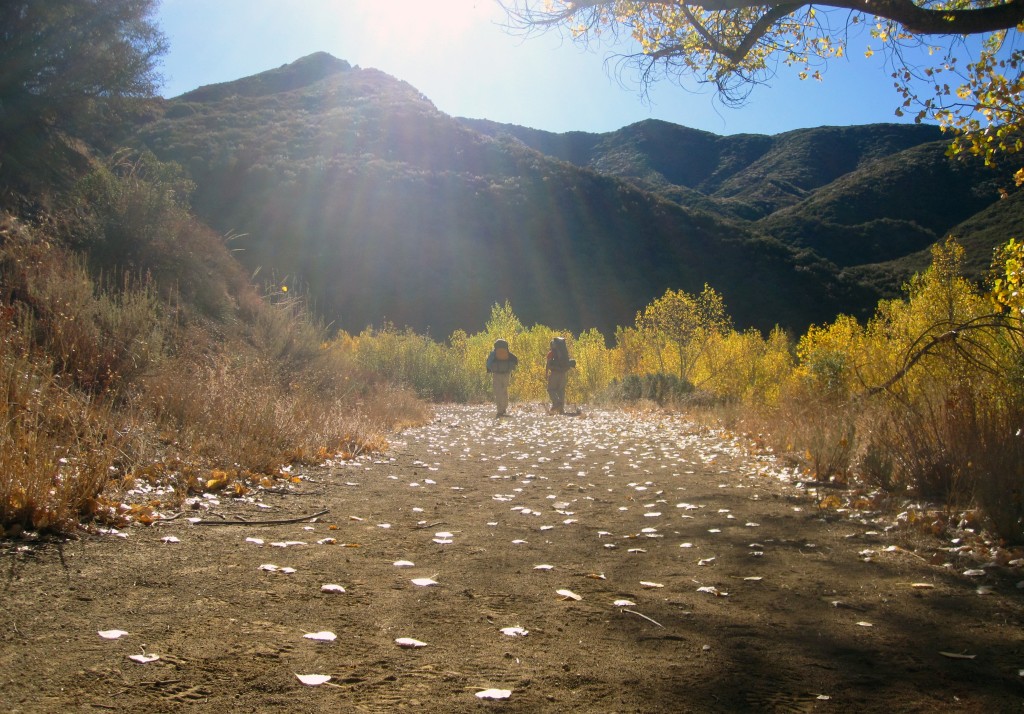 We ended up driving north of Ojai to the Sespe Wilderness. We started at the Piedra Blanca Trailhead and went east (on the Sespe Creek Trail), making our way through seemingly endless grassland plains. 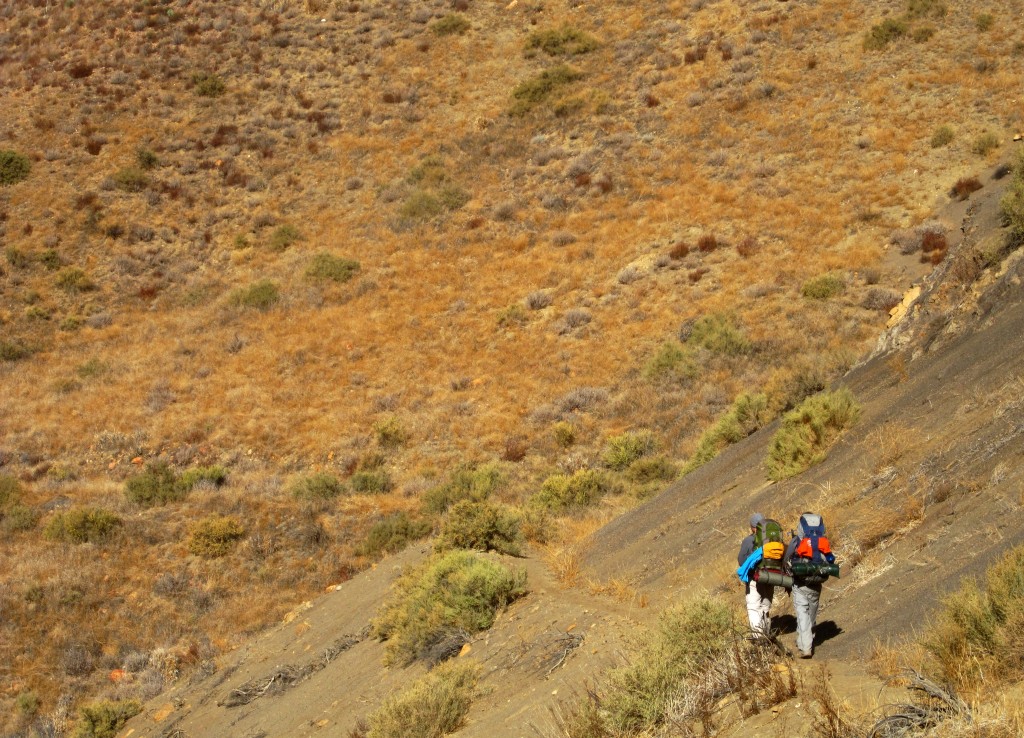 Initially I was a little concerned that it’d be super dry out there, and that there wouldn’t be much in the way of colors. This turned out not to be the case at all – lots of beautiful greens and yellows to be seen along the way. 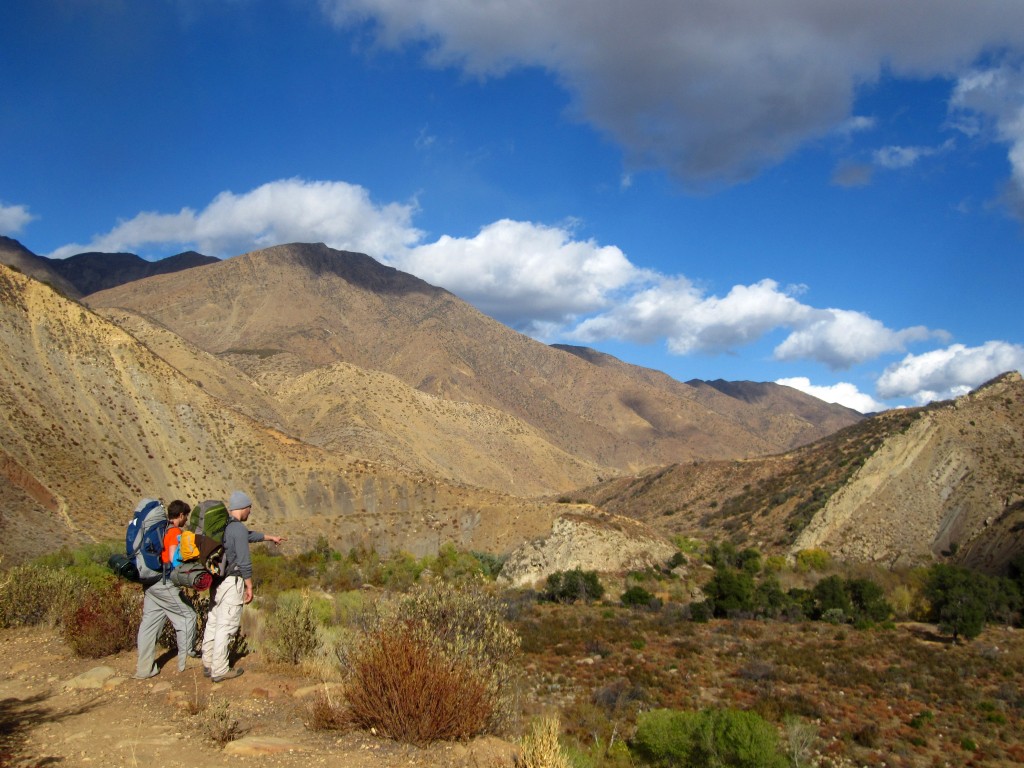 Much of the river bed had dried up, which made it difficult to stay on the trail at times. We found a few spots where there was running water, and we were able to filter some drinking water near our campsite. 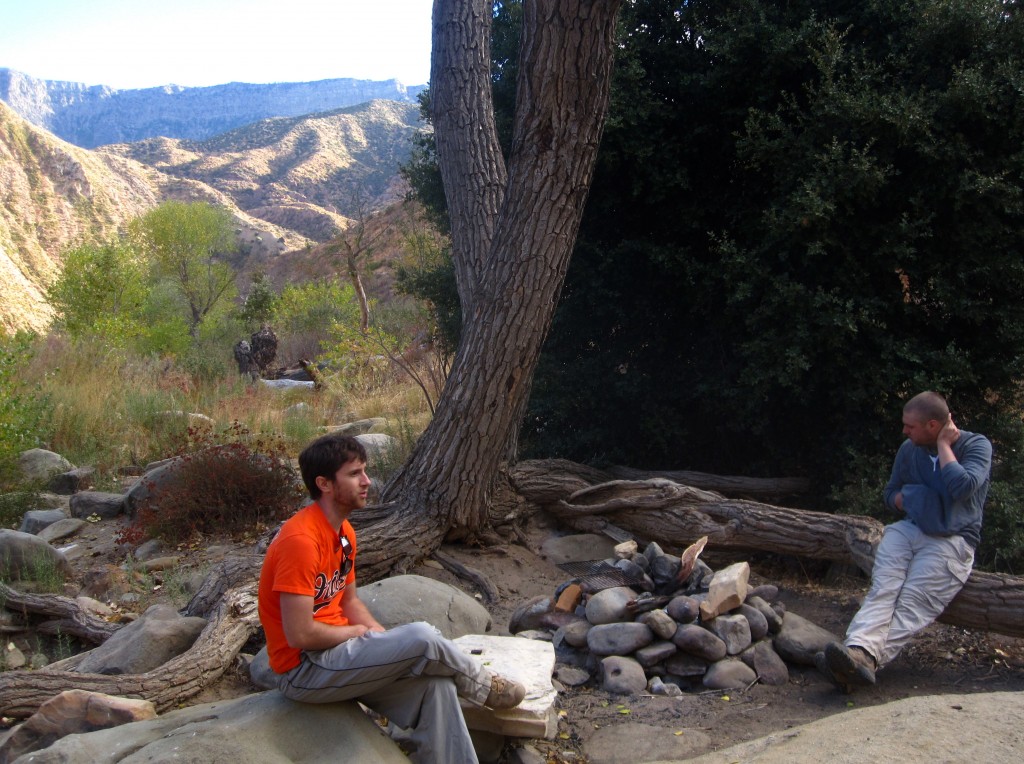 We snagged a pretty awesome campsite right next to the Sespe creek bed.

We came across some awesome boulder fields along the way. Some of them were in areas where the river had dried up, which made for some fun rock scrambling. 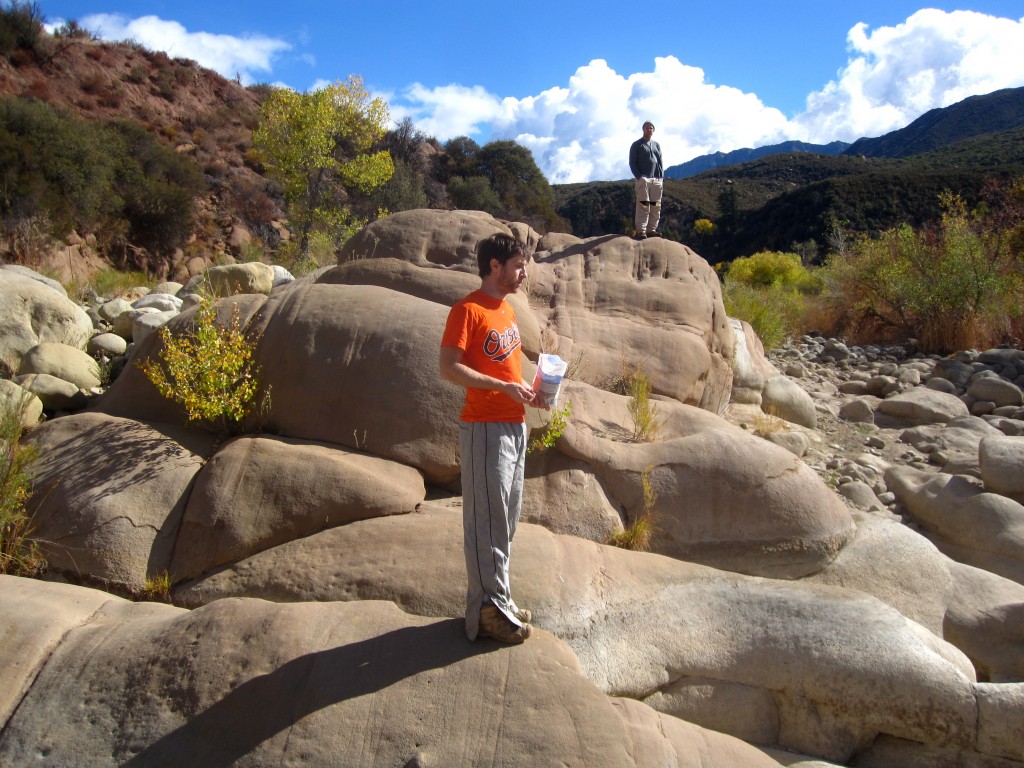 Hanging out on some boulders along the dried up Sespe Creek.

The wilderness campsite that we found was awesome. It was right along the creek bed, with plenty of space for tents, and a sitting area with a primitive fireplace. It was too dry for campfires, but we were happy to just lay around and stare at the stars, which were extremely visible. There were a crazy amount of shooting stars as well, it seemed like one of us would spot one every 2-3 minutes.

It was a pretty short trip, but very cool nonetheless – not overly difficult, and lots of beautiful scenery along the way. I plan on going back when there’s more water and doing some swimming along the way. I definitely recommend that you check it out, but if you plan on swimming (or checking out the hot springs) you may want to call the Ojai ranger station first (805-646-4348) to find out about the water levels.

Here are a few more photos for your enjoyment: 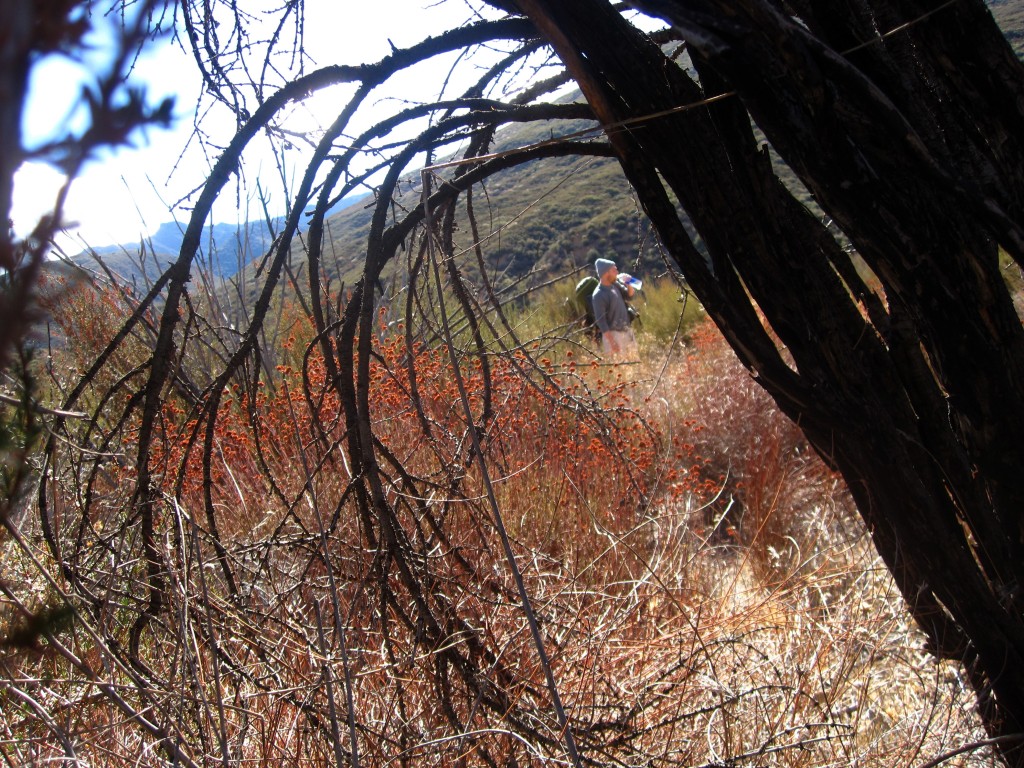 A view of Paul through a writhing blackened branch 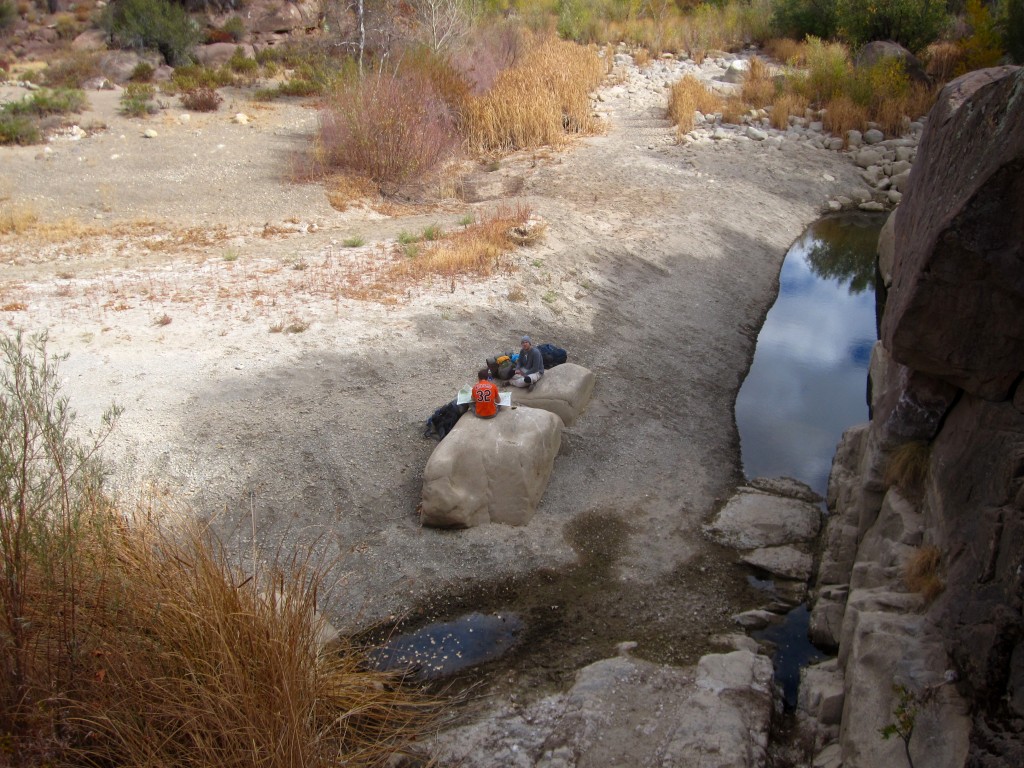 Looking down on Paul and Andy from the top of a large boulder. 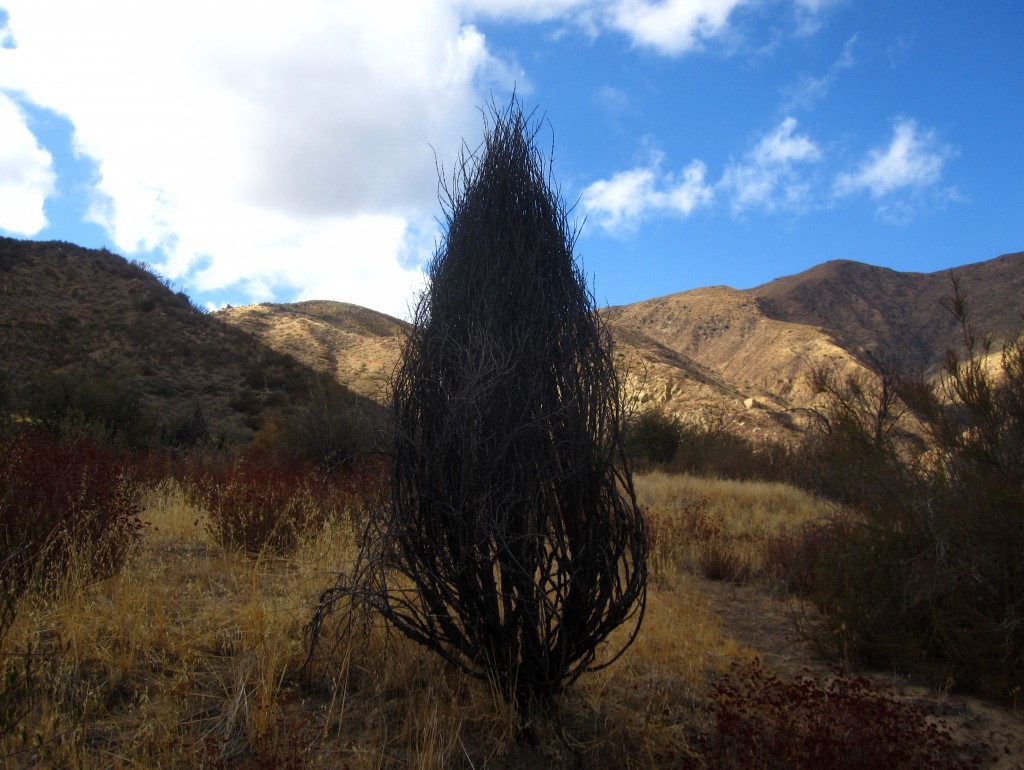 These “witch pods” were all over the place along the trail. Kinda creepy looking. 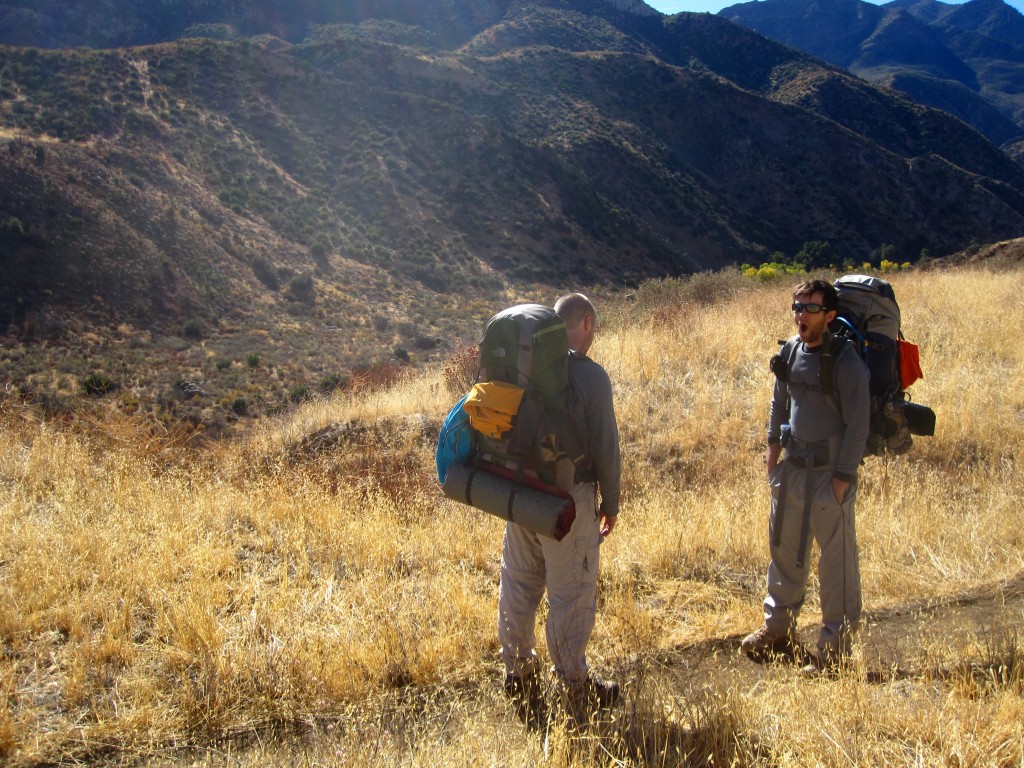 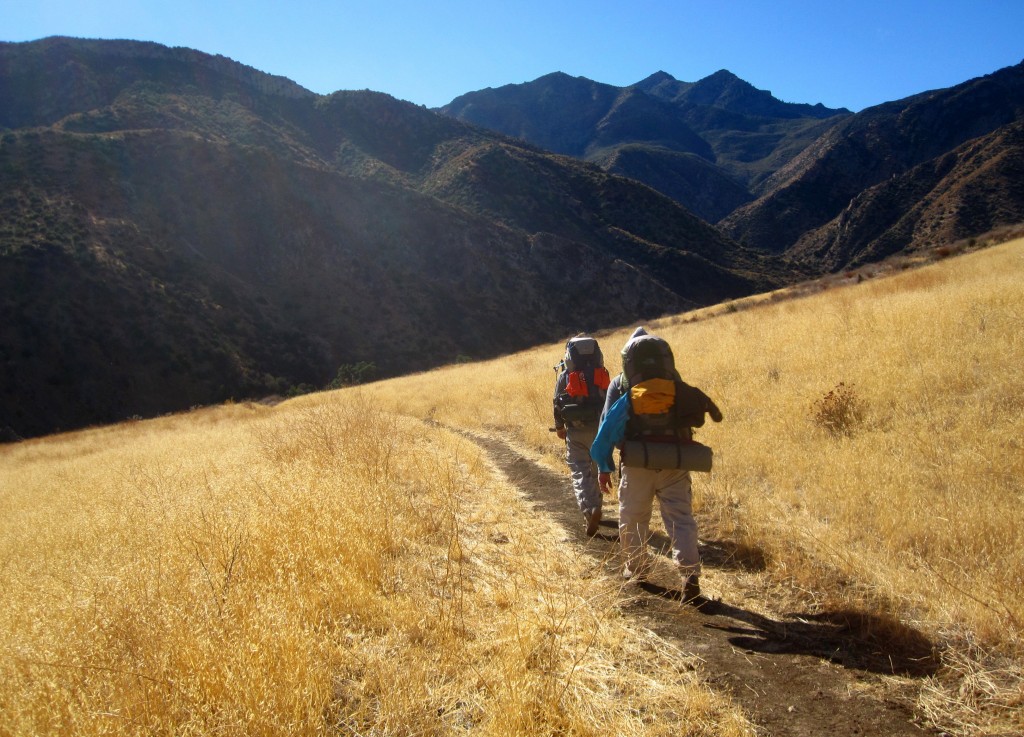 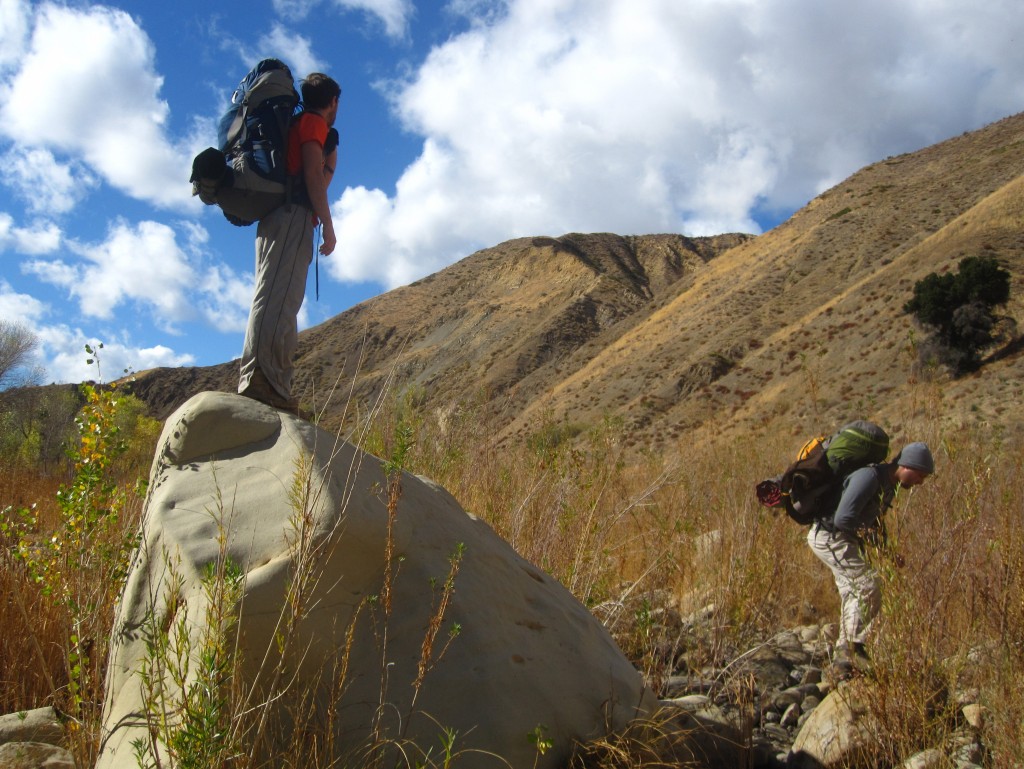 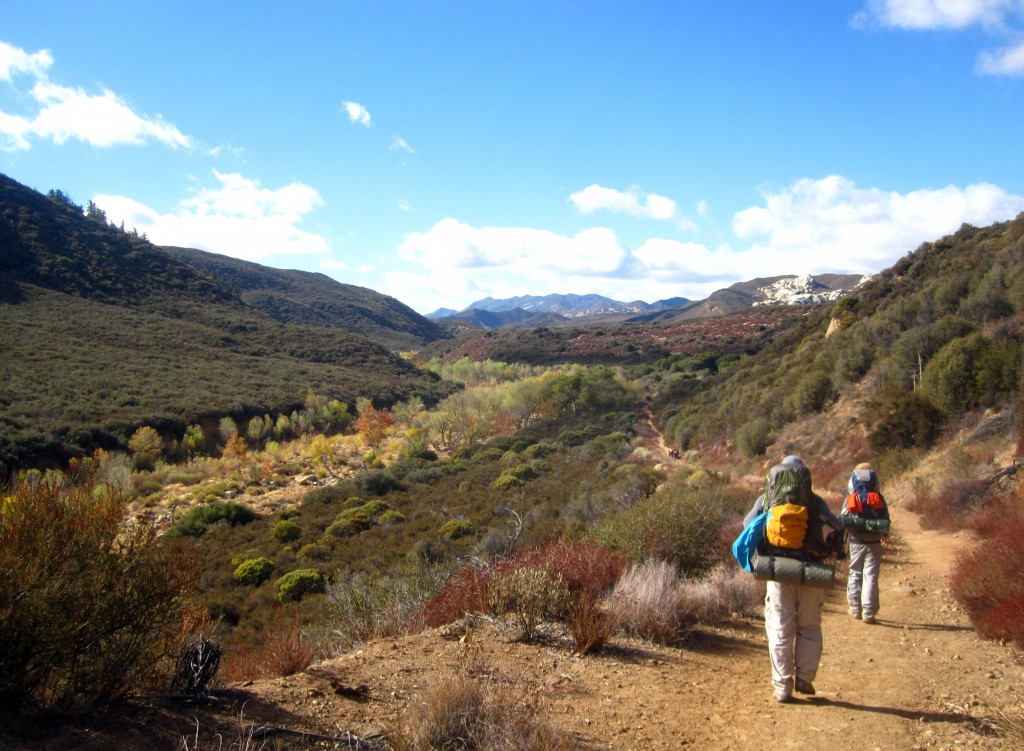 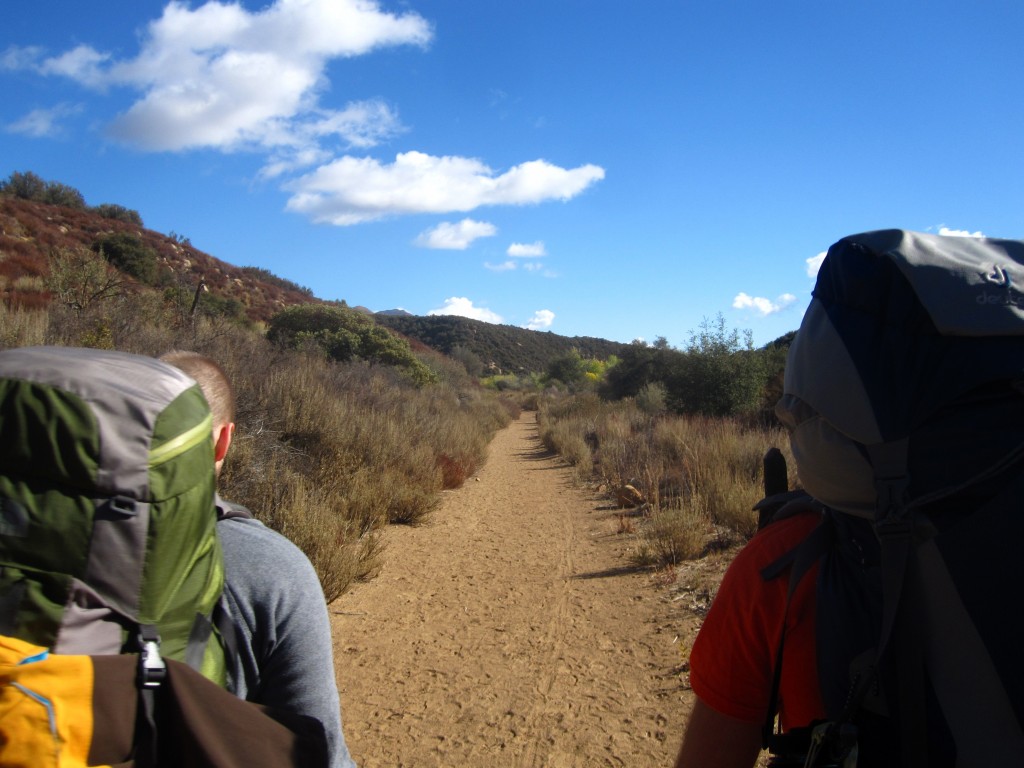 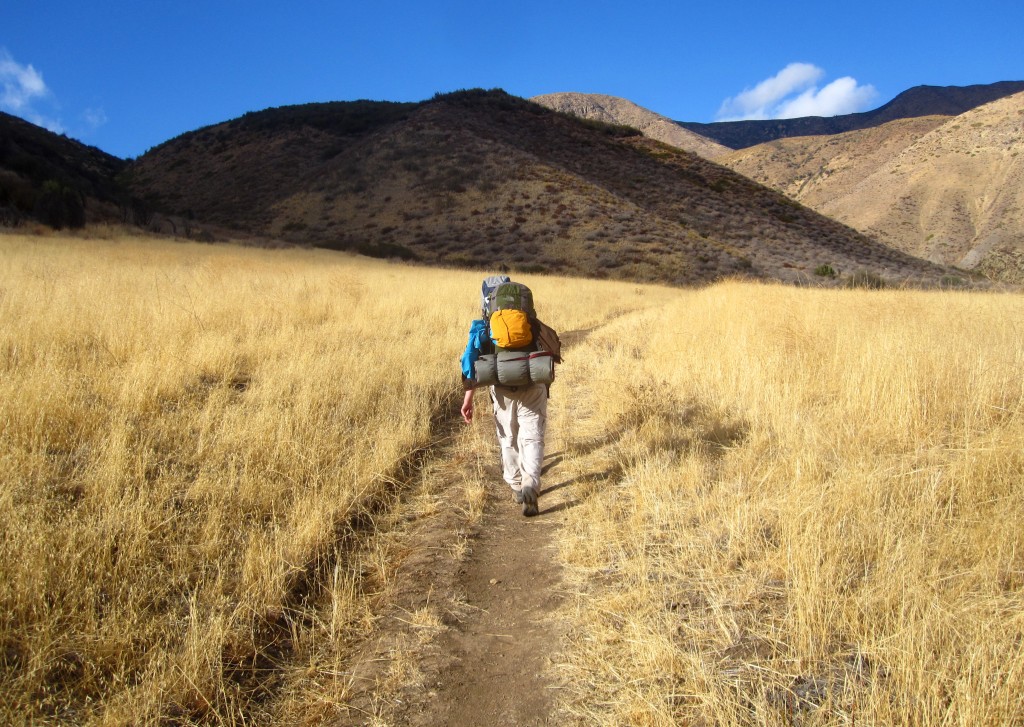 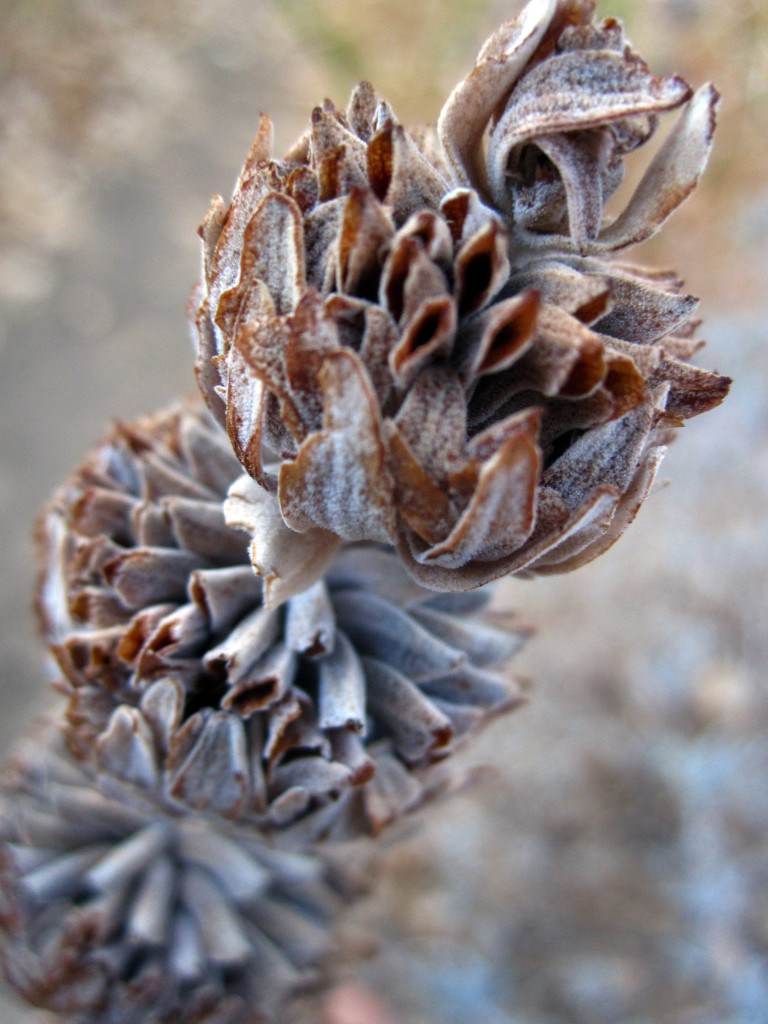 I’m not sure what kind of plant this is, but it’s pretty cool looking.
backpackingcaliforniacampinghikinglos padres national forestojaisespe creek trailsespe riversespe wilderness