Climbing in Joshua Tree & The Integratron 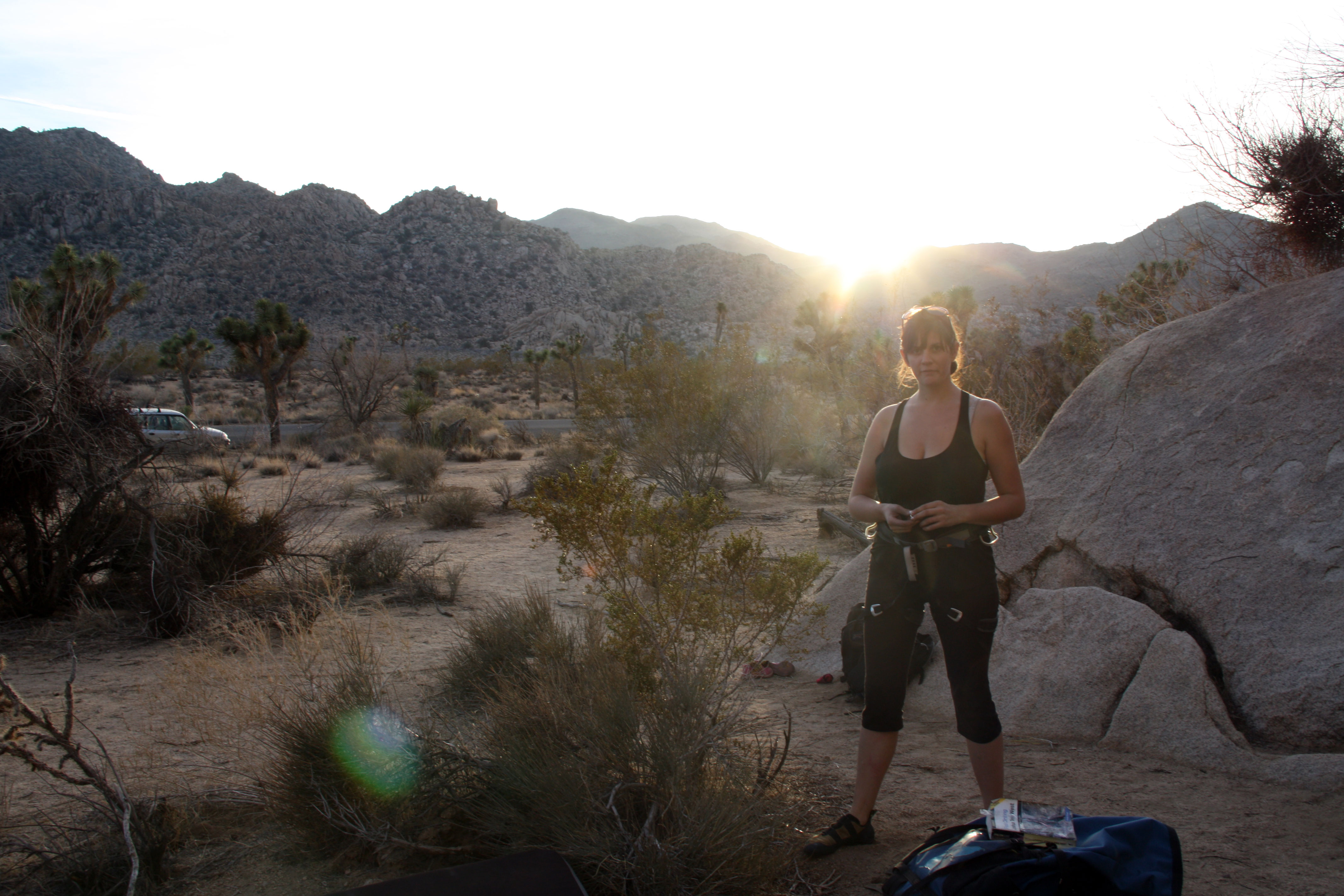 Life can get pretty hectic sometimes. Many people seem to gravitate towards the ocean when they want to relax. Perhaps it’s because I live by the beach, but I find the desert to be much more relaxing. 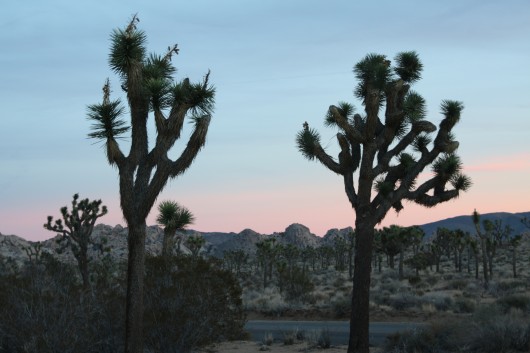 When I think of “the desert”, I think of Joshua Tree. Things just seem to move at a different pace out there. 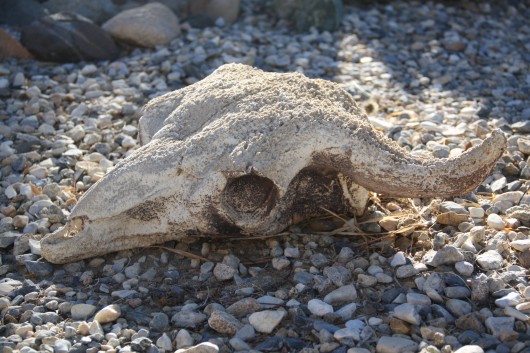 For me, spending any amount of time in Joshua Tree is comparable to pressing a “reset button”; it’s instantly calming.

Lauren, Makena and I recently spent a weekend in the desert with our friends Lesley and Brendan, who live and work in Joshua Tree. I happen to be taking a photography course right now, so I had a little extra motivation to document the trip.

A trip to Joshua Tree wouldn’t be right without doing some climbing in the National Park. We spent most of our Saturday climbing with Lesley and her friend Ethan. 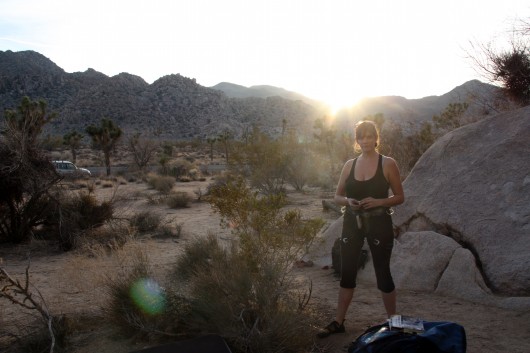 Ethan is a climbing instructor in Joshua Tree, and he knows the park like the back of his hand.

After talking with us for a bit to find out how experienced we were with climbing and what difficulty levels we’d be comfortable with, Ethan led us to our first crag, Lloyd’s Rock. 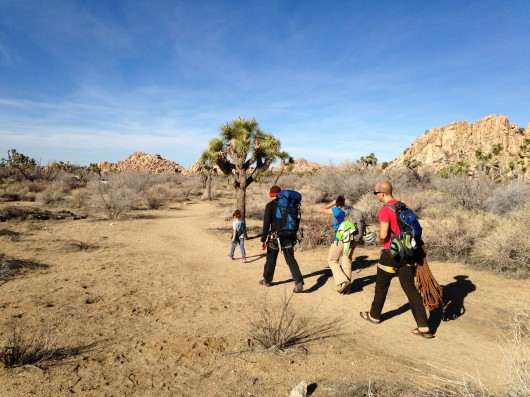 When we got to Lloyd’s Rock, I had a strange feeling of  déjà vu. I soon realized that I had climbed here on my first trip to the park, which was almost exactly 4 years ago.

Ethan set us up on a 5.4 route called Borneo. This gave us a chance to get warmed up and make sure that we were all familiar with the equipment and knew how to belay properly. Makena was paying extra close attention. 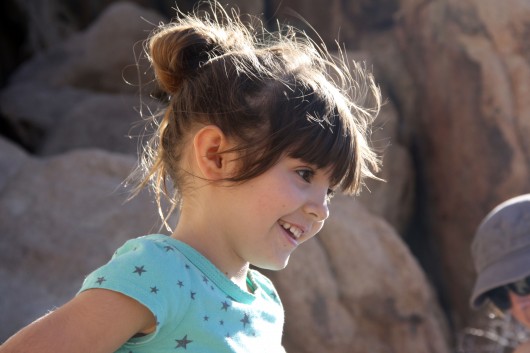 We didn’t have a harness that would fit her, but she had a lot of fun scrambling around on the boulders surrounding us. 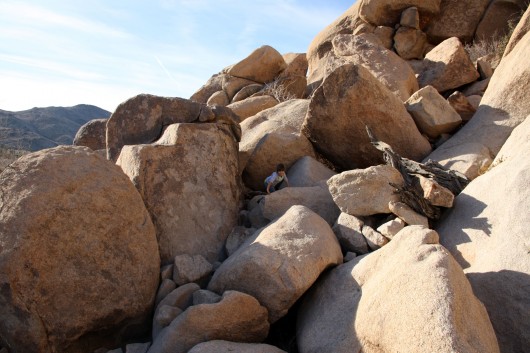 After we all had a chance to get warmed up, we moved over to another route called Friend Eater, a 5.9. 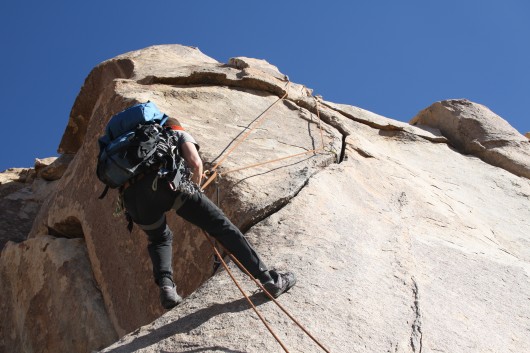 Ethan setup the anchor for us and we all took turns climbing the route. 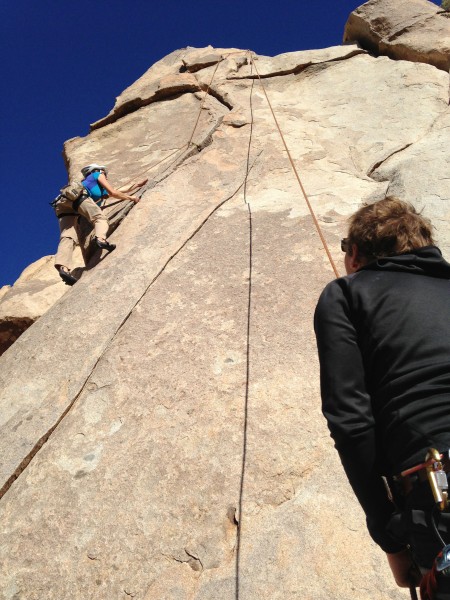 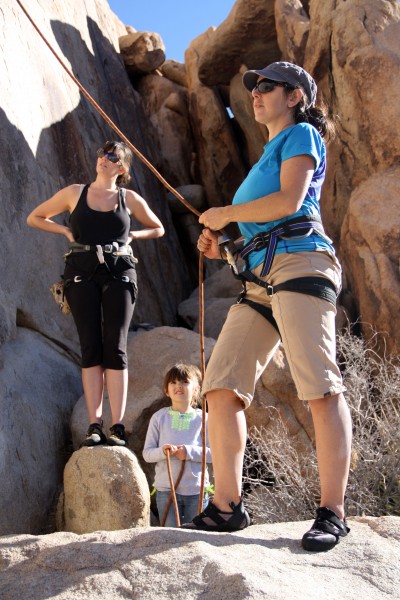 This was a challenging route for me, especially since I was out of practice. It was a lot of fun though, and it felt especially good to finish it after several failed attempts.

Once Ethan cleaned his gear off the wall, we moved over to the south face of AFPA Rock. 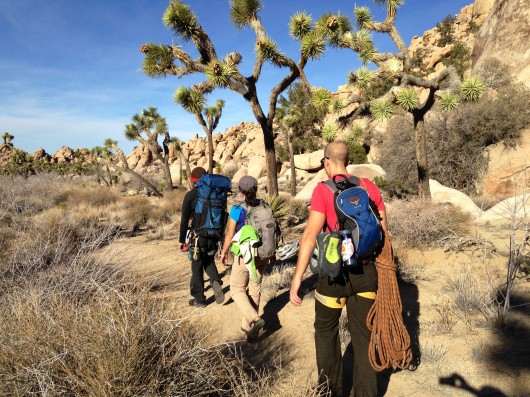 Lesley belayed Ethan as he made his way up the face to set up anchor for us. 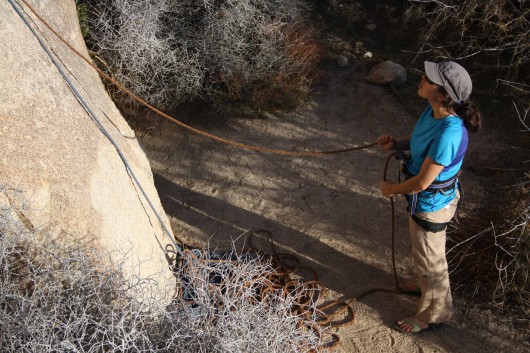 As he climbed up, he placed cams along the way until he could set up anchor at the top. 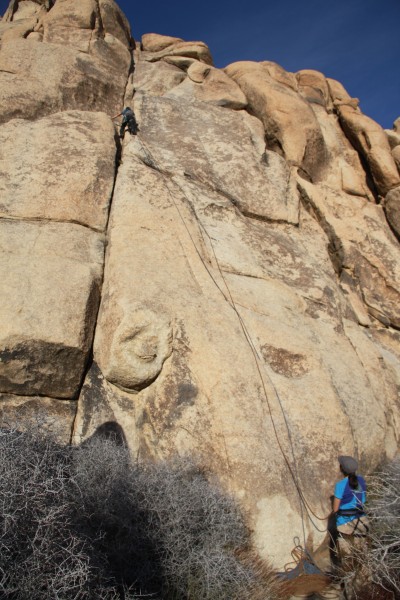 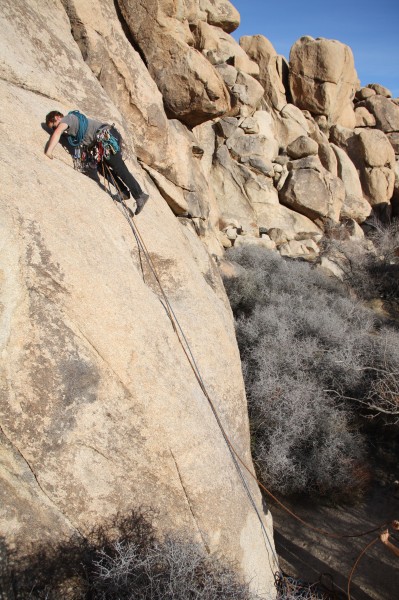 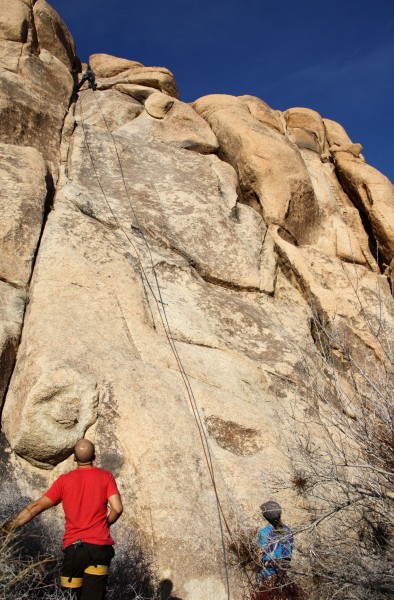 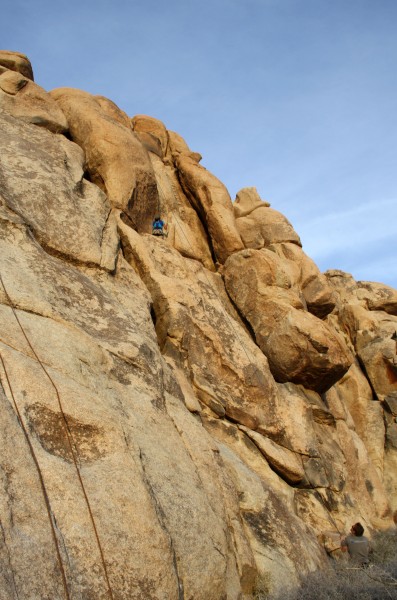 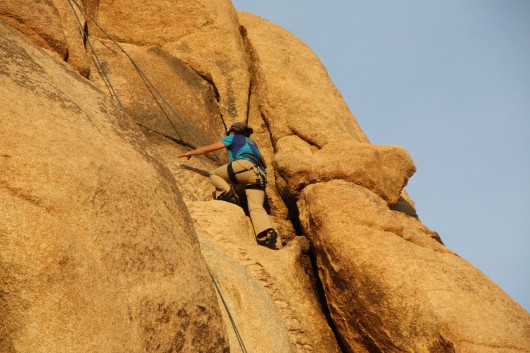 I had a chance to climb Rip Off, and then I belayed Lauren while she took her turn. For her first time climbing top rope outdoors she did a great job; she made it all the way to the top! 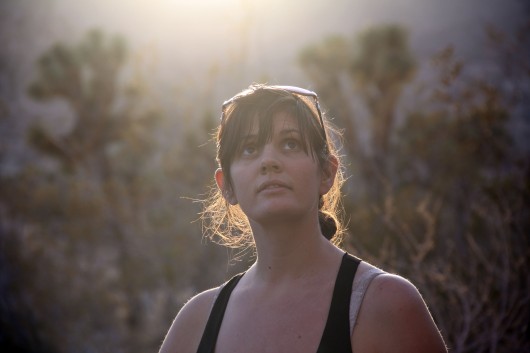 Rock climbing with an instructor who is familiar with the park is a nice alternative to what I’m used to: attempting to navigate the enormous park via maps, getting to an area, and then finding out that it’s much more difficult than my book would have led me to believe.

I was the only one taking photos, so I don’t have as many climbing shots as I would have liked. I do have some other pictures that I took while we were in the desert though.

The moon was visible in the sky by around 4pm which was pretty cool. 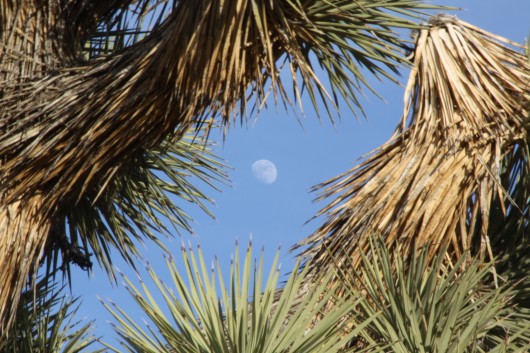 Naturally, Makena kept herself fully occupied in the desert while we were climbing. 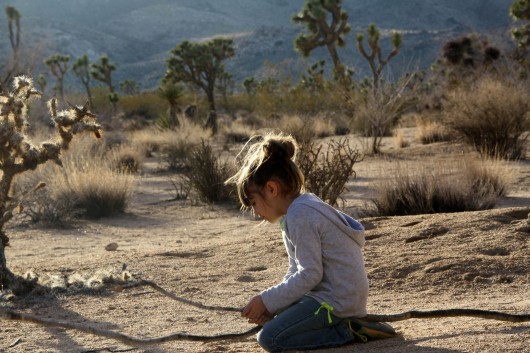 As the desert sun went down, I played around with some “long exposure” shots, but was pretty limited with what I could do because I didn’t have a tripod with me. 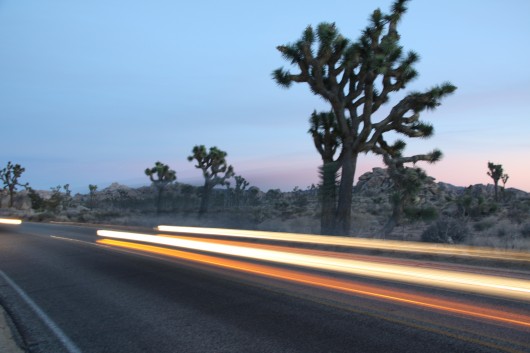 Our day of climbing in the park was over just as quickly as it had started. Our fun wasn’t over yet though!

The following morning, we had an opportunity to go check out the Integratron, an all-wood geodesic dome in Landers, CA (just outside of Joshua Tree). If you’ve never heard of it before, read about it here.

I wasn’t sure what was in store for us, but I knew that we’d be experiencing a “sound bath”. 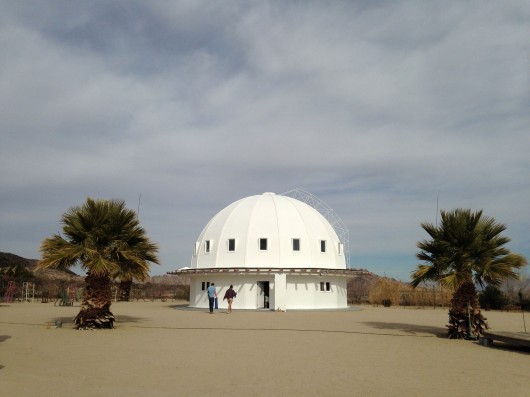 When you enter the dome, you grab some blankets and pillows and lie on the ground while waiting for the sound bath session to begin. I was with several friends and we were making jokes back and forth; the mood wasn’t overly serious.

Once the sound bath began, I closed my eyes and tried to relax. It took me quite a while to disconnect and let my thoughts go because I had way too much coffee with breakfast. Lesson learned.

It took me about 10 minutes or so, but I was eventually able to get my mind to stop running at 100 mph. I began to relax and was able to concentrate on the sounds being made by the crystal bowls. I noticed that the more I relaxed, the more my breathing slowed down. I started to feel weightless, and within a few moments I felt like I was floating in a tank of water.

I maintained an awareness of my surroundings, but rather than feeling my whole body, I only felt my head. It felt like my head was suspended in zero gravity. I’m not sure if the hypnotizing frequencies being created by the crystal bowls had anything to do with this strange sensation, but it sure seemed that way at the time.

I began to “feel” the sounds created by the crystal bowls more physically, and certain tones had what I can only describe as a physical impact.

Then I started to feel what can best be described as vertigo. My body felt like it was spinning around in fast circles; I felt like I was in a gyroscope. This sped up more and more to a point where I started to feel a bit nauseous. The sensation was similar to the feeling you get as a kid when you’re in a swing and someone winds it up and then lets go, and you spin in circles rapidly.

I tried to embrace this feeling and ride it out, but after about 5 minutes I decided that it was too much to handle, so I opened my eyes in an attempt to “snap out of it”. Surprisingly, opening my eyes didn’t stop the sensation fully. Once I wiggled my arms around a little bit I was able to snap out of it and bring the spinning sensation to a halt, but I still felt incredibly relaxed.

After the session ended, we spent some time appreciating the internal architecture of the dome, and its exceptional acoustics. My friends and I tried standing in different parts of the room and talking. It’s pretty wild; you can stand across the room from someone and speak in a whisper, and they’re able to hear you loud and clear. You can see them moving their mouths to whisper, and the whisper sounds much louder than it should be… and it’s coming from behind you. It’s disorienting, but in the best way possible. 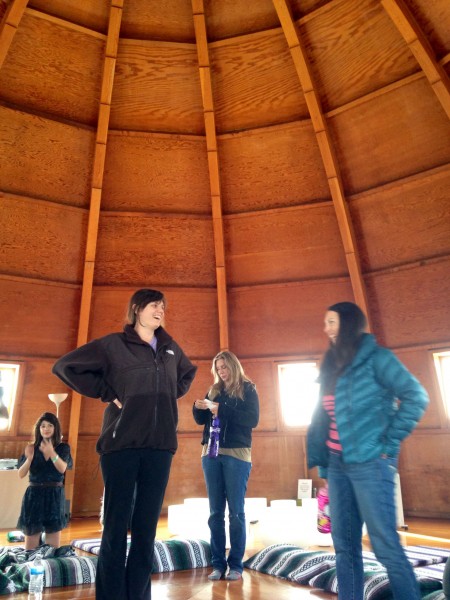 The experience was very cool, and I’d highly recommend it to anyone who is even remotely interested in meditation… Or UFOs, for that matter, as the place seems to have a pretty rich history with those.

Unrelated, but I would totally buy this Joshua Tree “Supervillian Lair” if I could afford it. How cool is that place?

Needless to say, I love spending time in the desert, and I eagerly await my next visit in May for the Joshua Tree Music Festival.

That’s all that I’ve got. Thanks for reading!