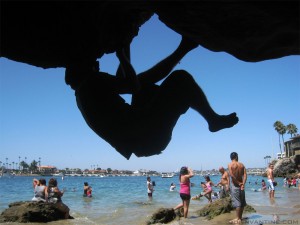 This is my favorite bouldering shot thus far.

I was visiting California for the first time in September 2009. Four of us drove down to San Diego on a Saturday night and had an amazing time. The following Sunday (Sep 6th, 2009), we took our time coming back up North, stopping at scenic vistas along the way.

Dan and I are both into rock climbing, and he had mentioned that there was bouldering on the beach somewhere in Corona del Mar. Southern California beaches and bouldering? It sounded too good to be true.

We made our way to “Pirate’s Cove” and sure enough, several climbers were already there, crash pads on the sand. The climbers were significantly outnumbered by picnicking families who were blocking off the majority of the climbs.

This particular climb starts on the inside of a cave, and comes up around the face. The holds were a little wet, but the weather was perfect for bouldering. Unfortunately we didn’t have climbing shoes or a crash pad with us, so our efforts were weak at best… But this photo was more than worth it.