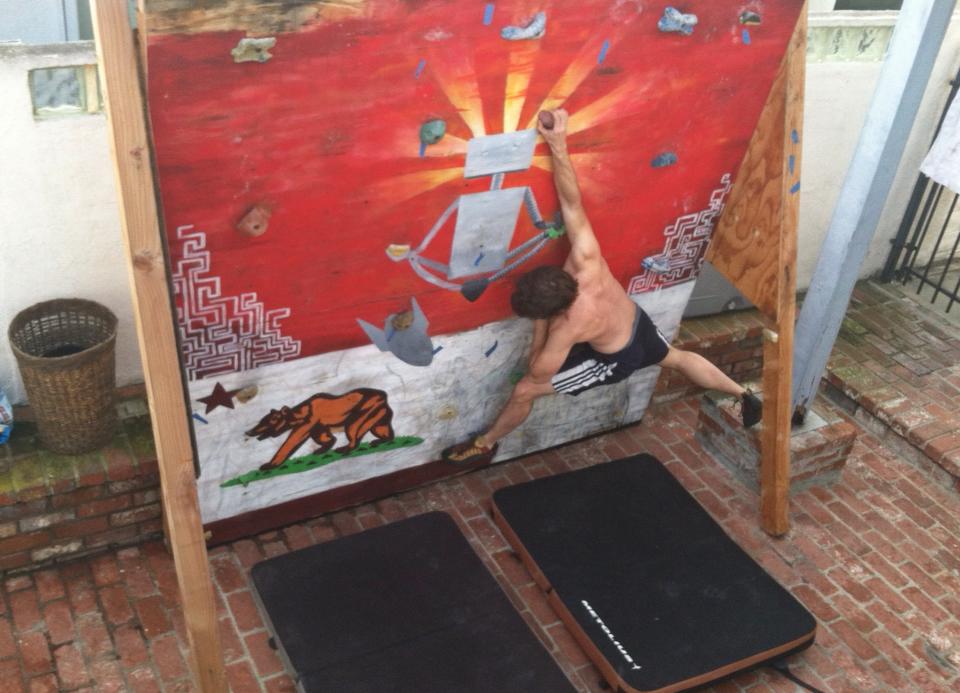 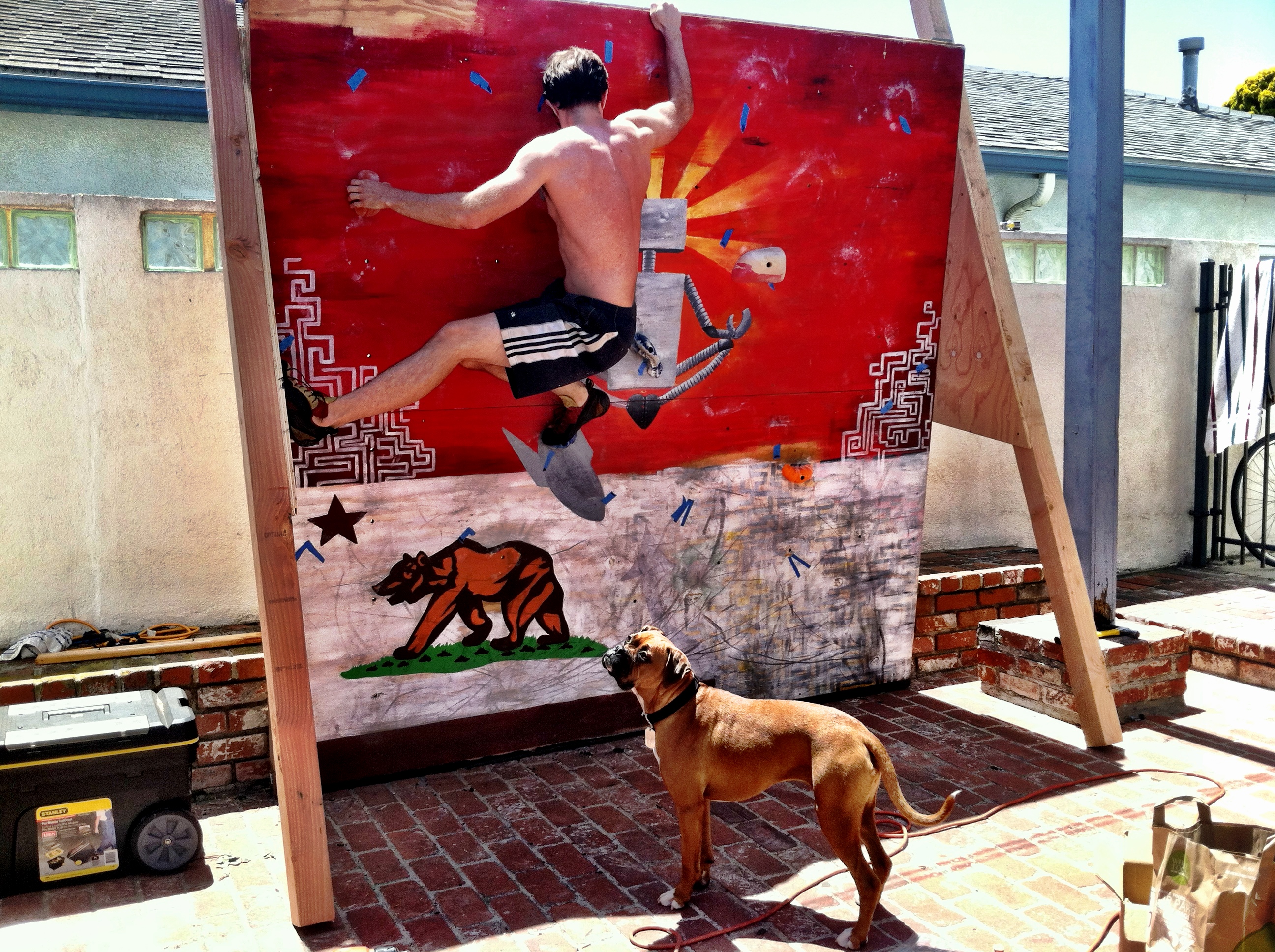 As the title says… I built a home rock climbing wall!

Actually, I can’t even pretend that I did this on my own. A lot of people heavily contributed to this bad boy as it evolved over the past few years.

Our rock climbing wall was born in January of 2010 in a “man cave” in Hawthorne, CA. Dan Pacifico and I wanted to be able to build our climbing strength, and we had a ton of room in the garage to work with. We decided we’d just put climbing holds all over the place. 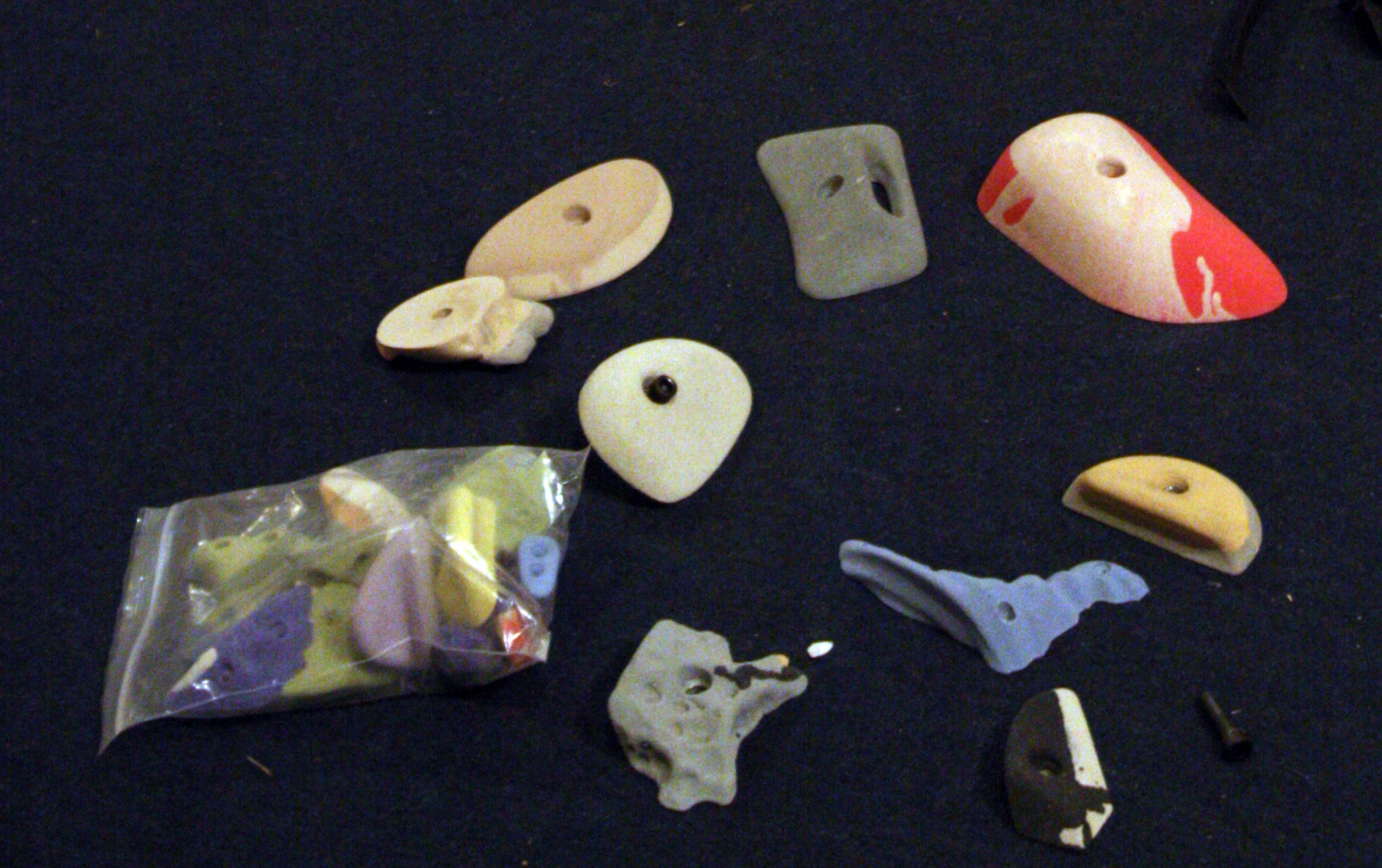 This was the first set of climbing holds that I purchased from REI. We have a lot more now.

We soon realized that this would turn our walls into swiss cheese, so we decided to attach some plywood to the wall, and fill that with holes (for “t-nuts“). And thus was born…

First, we built a frame, the outer dimensions measuring 8’x8′. 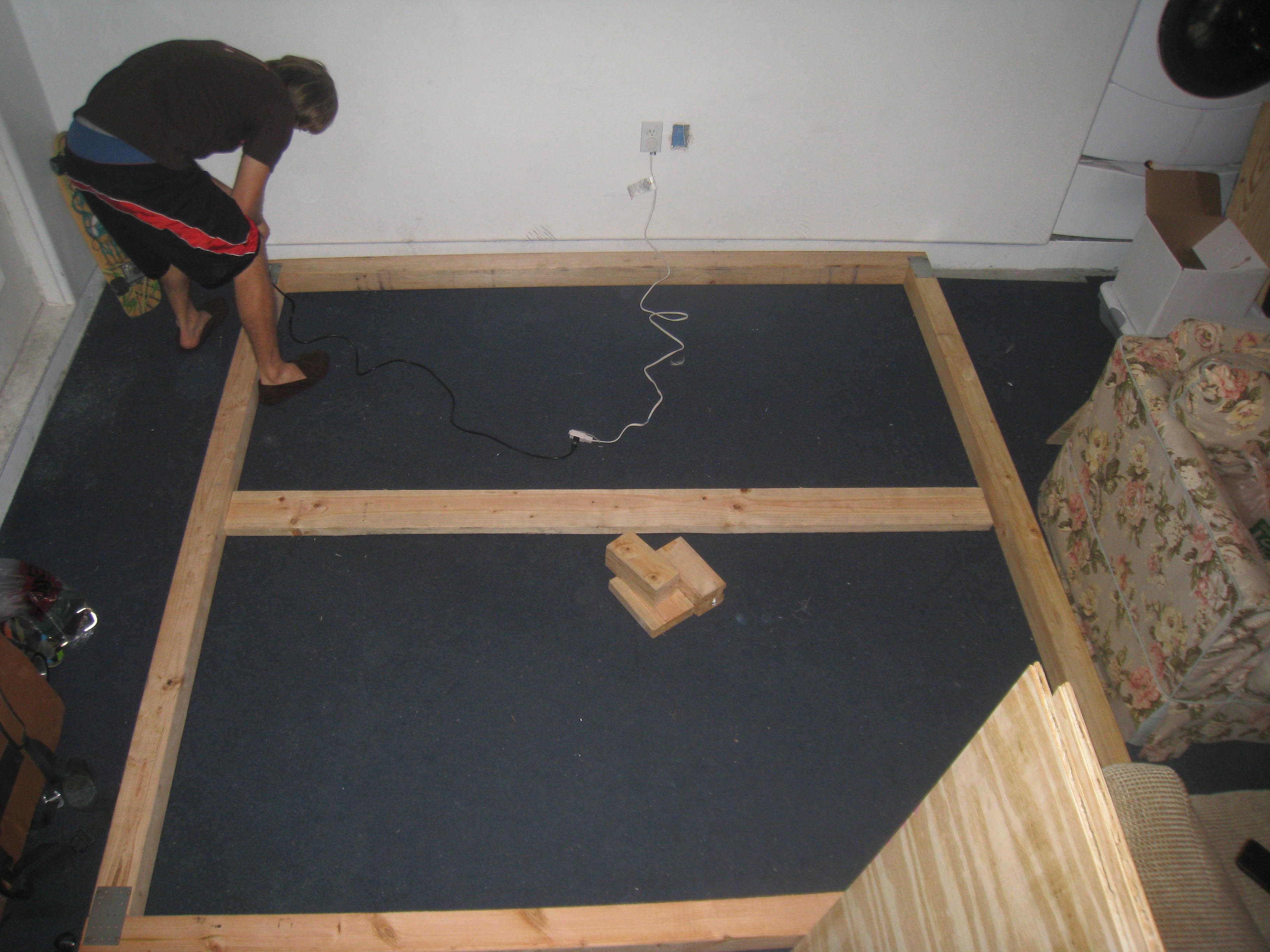 And attached two 4’x8′ pieces of sheet plywood to the frame. We then attached this 8’x8′ wooden climbing square “wall” to the actual wall using some fancy brackets. 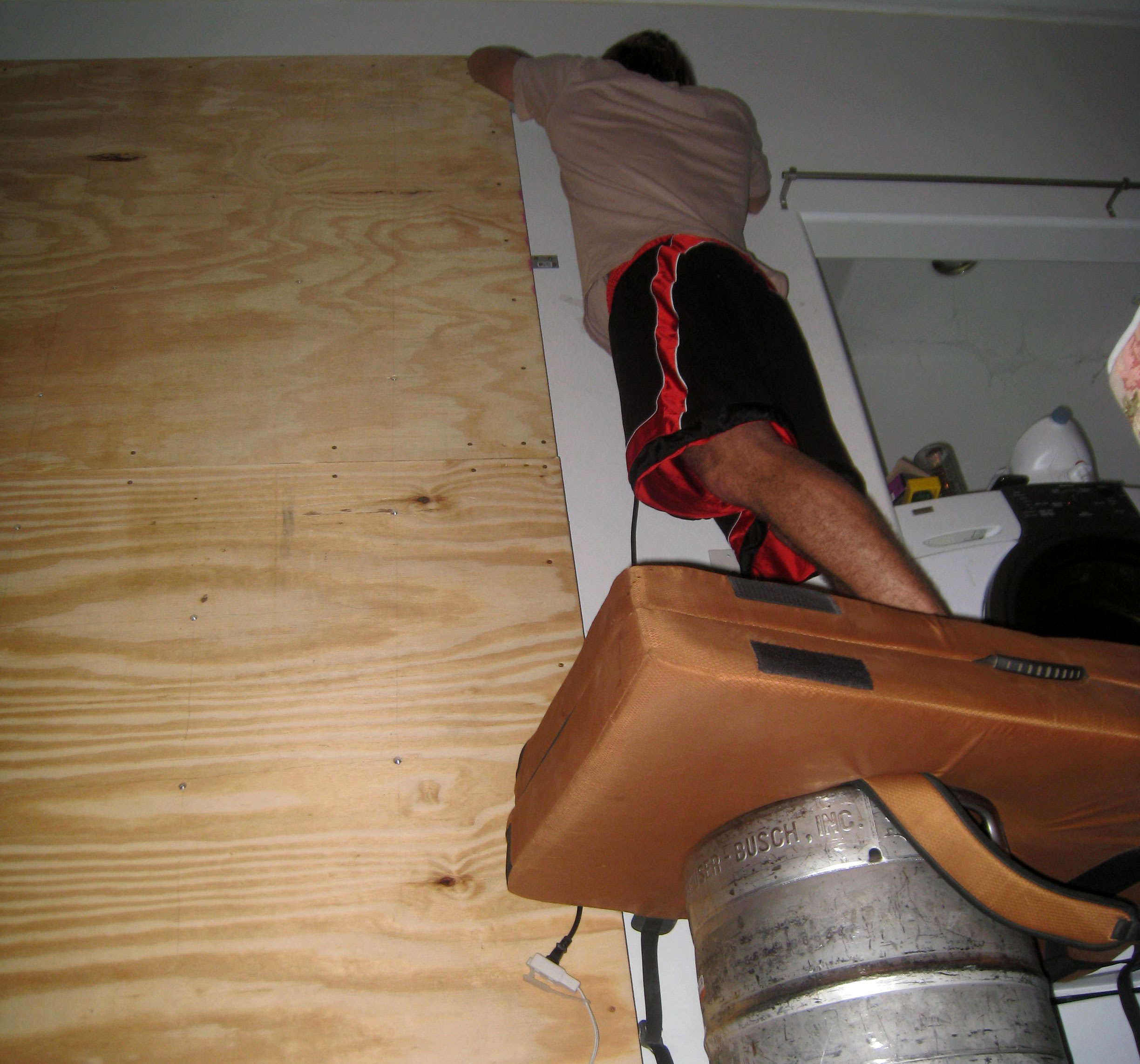 And it was good. 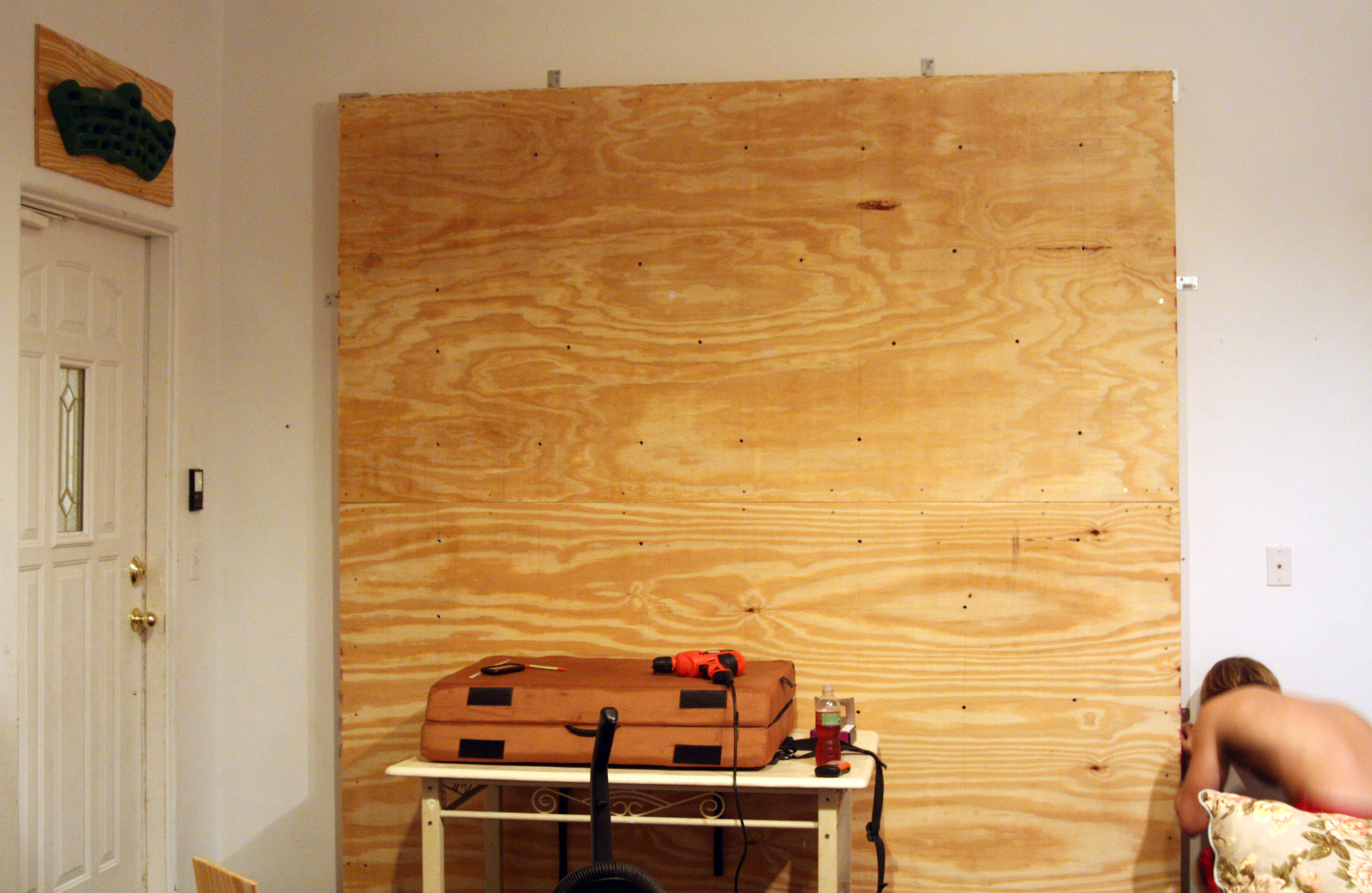 We didn’t waste any time getting holds up on the wall. 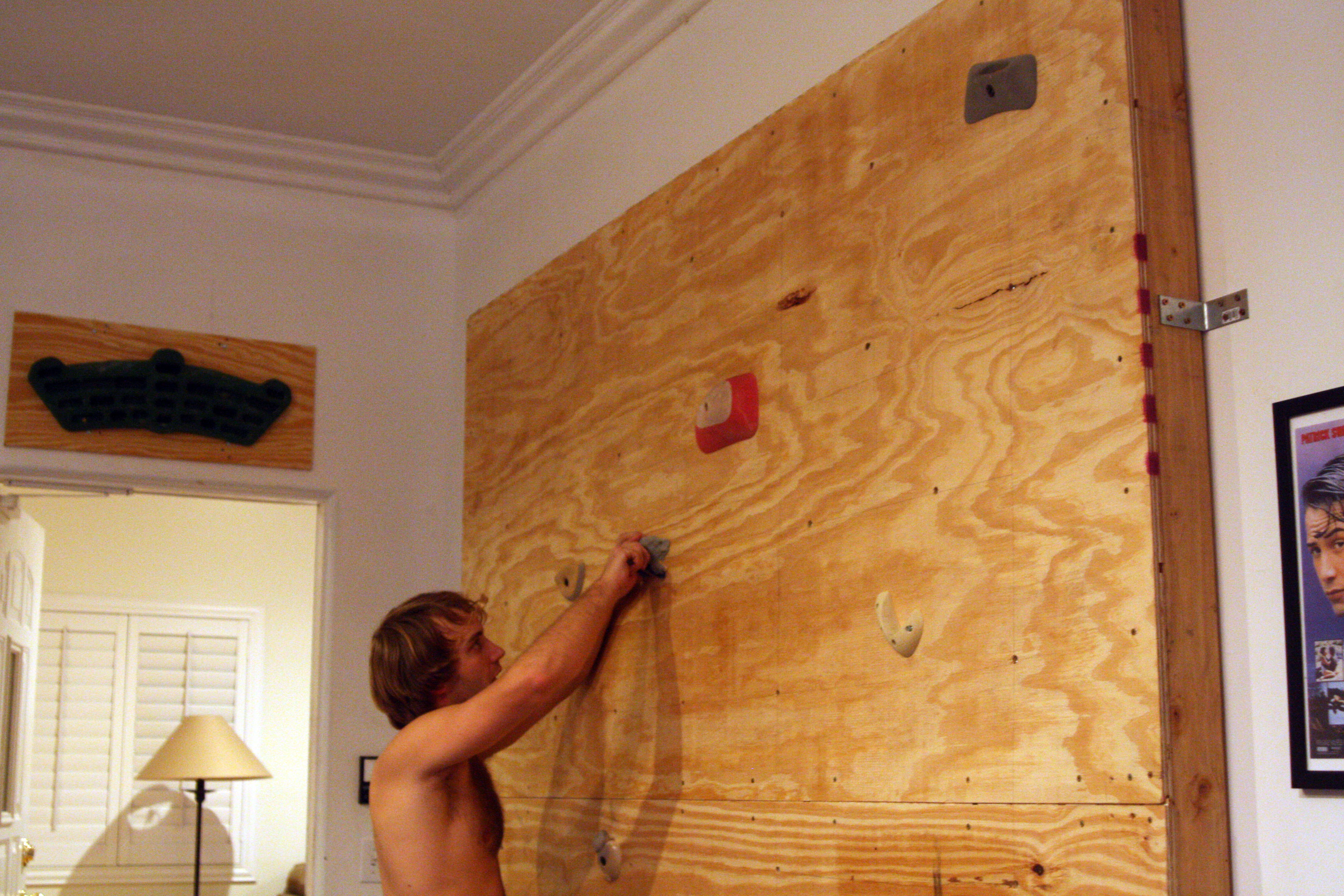 This was the first time that either of us had ever set routes. We figured it out as we went, and had a lot of fun in the process. 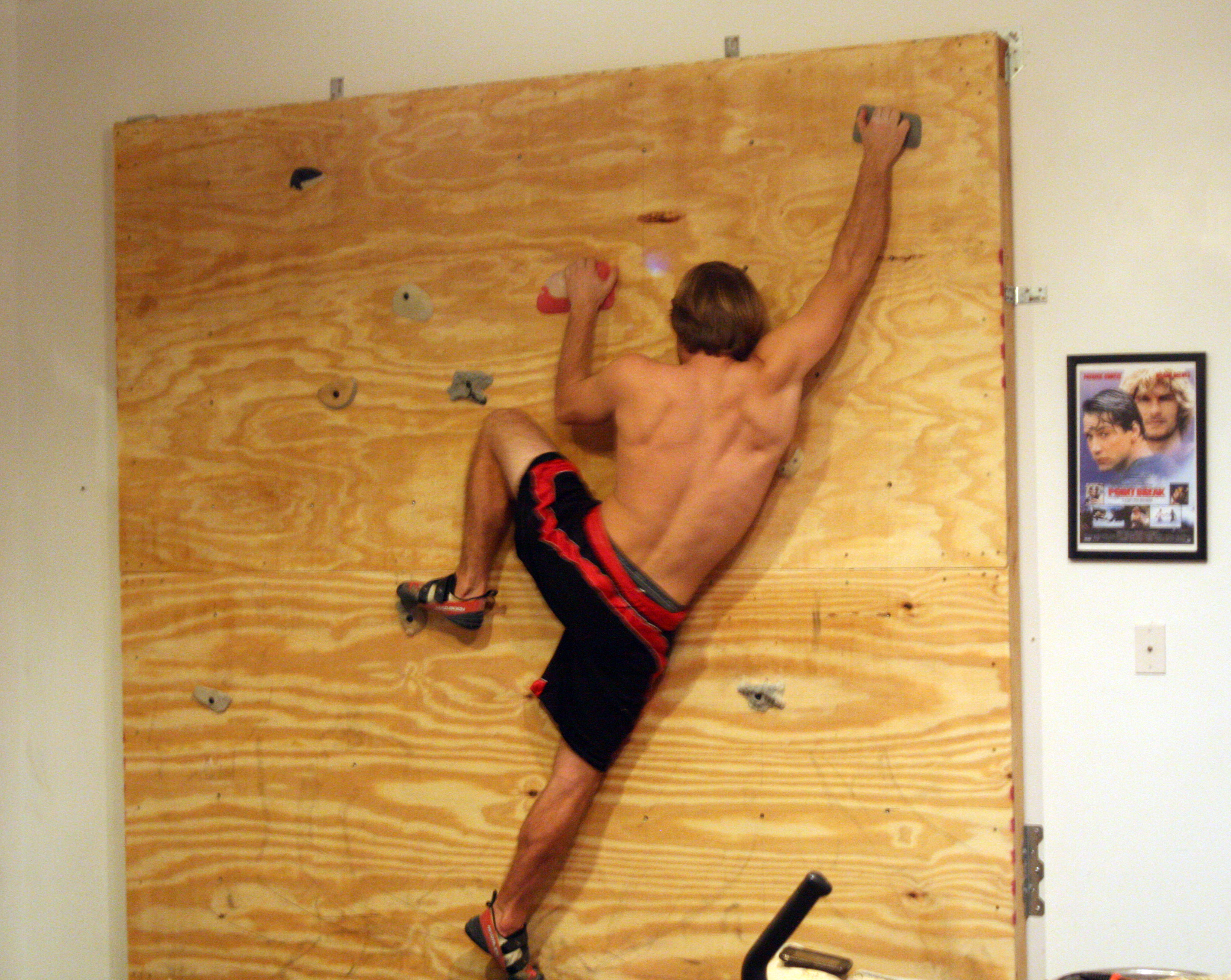 The top of the climbing wall was about 9 feet off the floor, so we didn’t have a whole lot of vertical room to work with. This forced us to get creative with our routes.

We were stoked to have a home bouldering wall, but Miki pointed out to us that we now had a gigantic canvas hanging in our garage. So she made it look cooler. 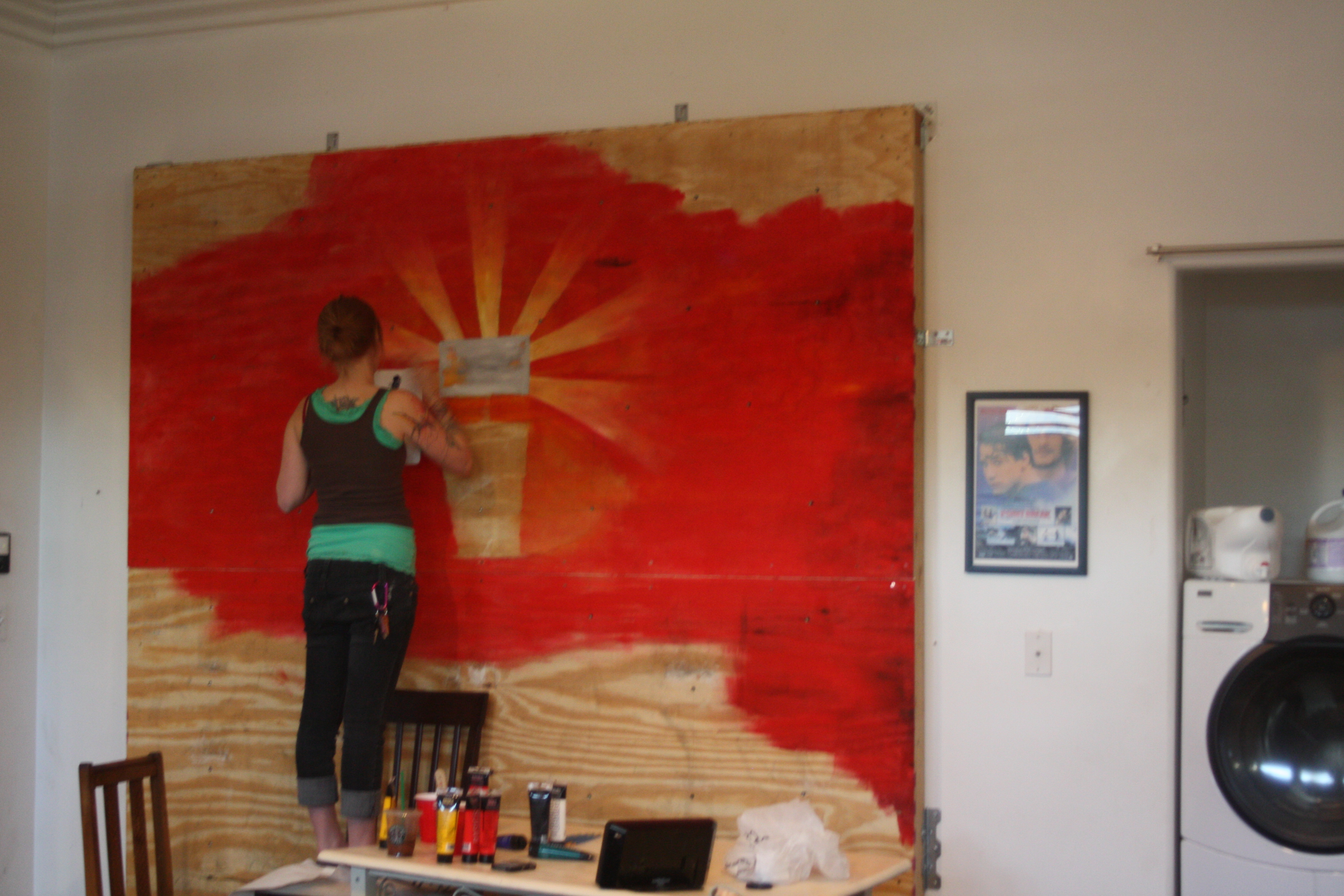 The rock climbing wall got a lot of use in that garage, as evidenced by the black climbing shoe scuff marks all over the bottom. 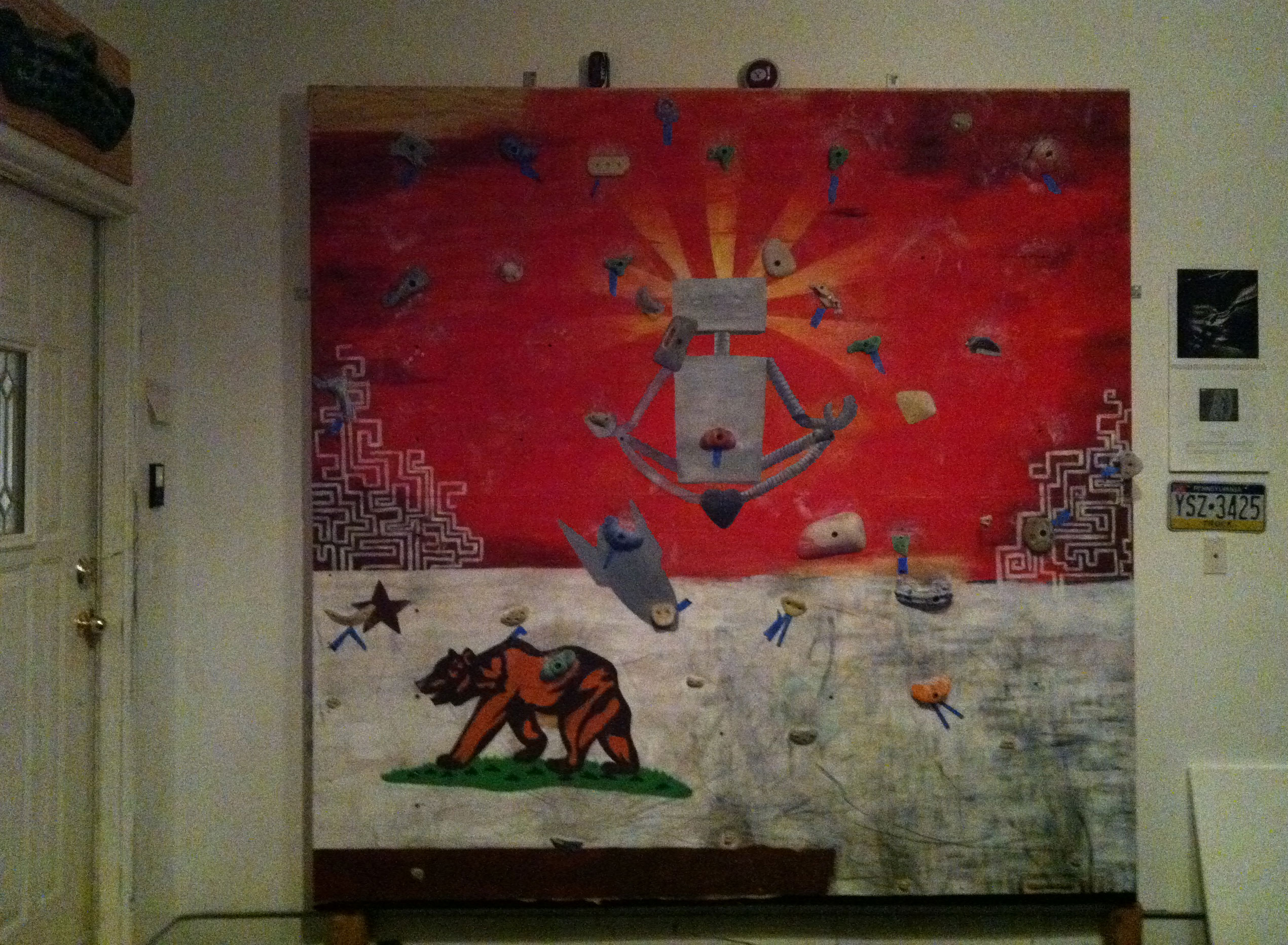 I loved opening up the garage doors on a nice day and letting the cool breeze blow in… And loud death metal flow out into the neighborhood.

When it was time for us to move out, I couldn’t bear to leave it behind… 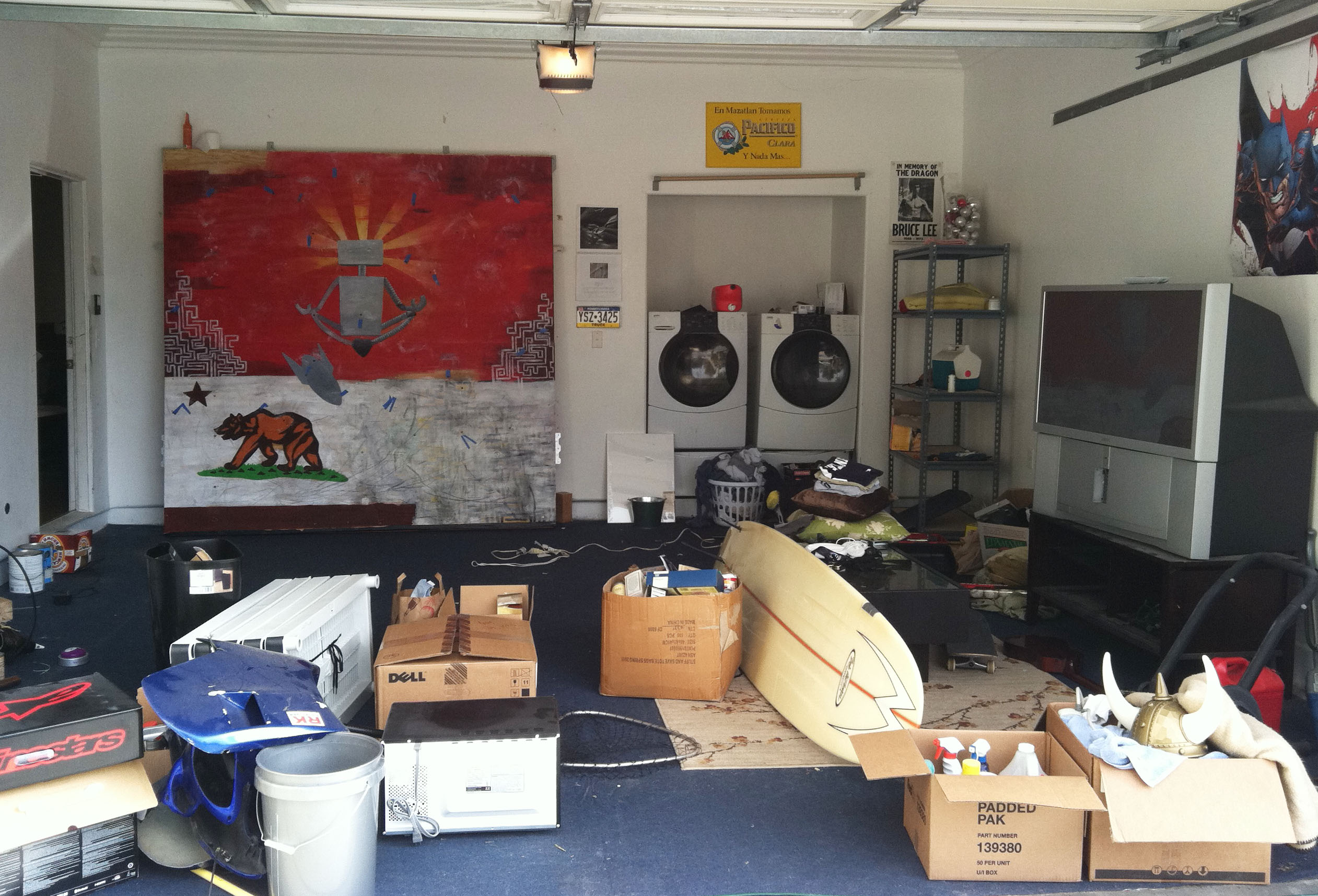 So Andy and Paul packed the climbing wall, along with everything else in the house, into the U-Haul (while I partied scott-free at Coachella!) and the wall followed us to our new home in Marina del Rey. 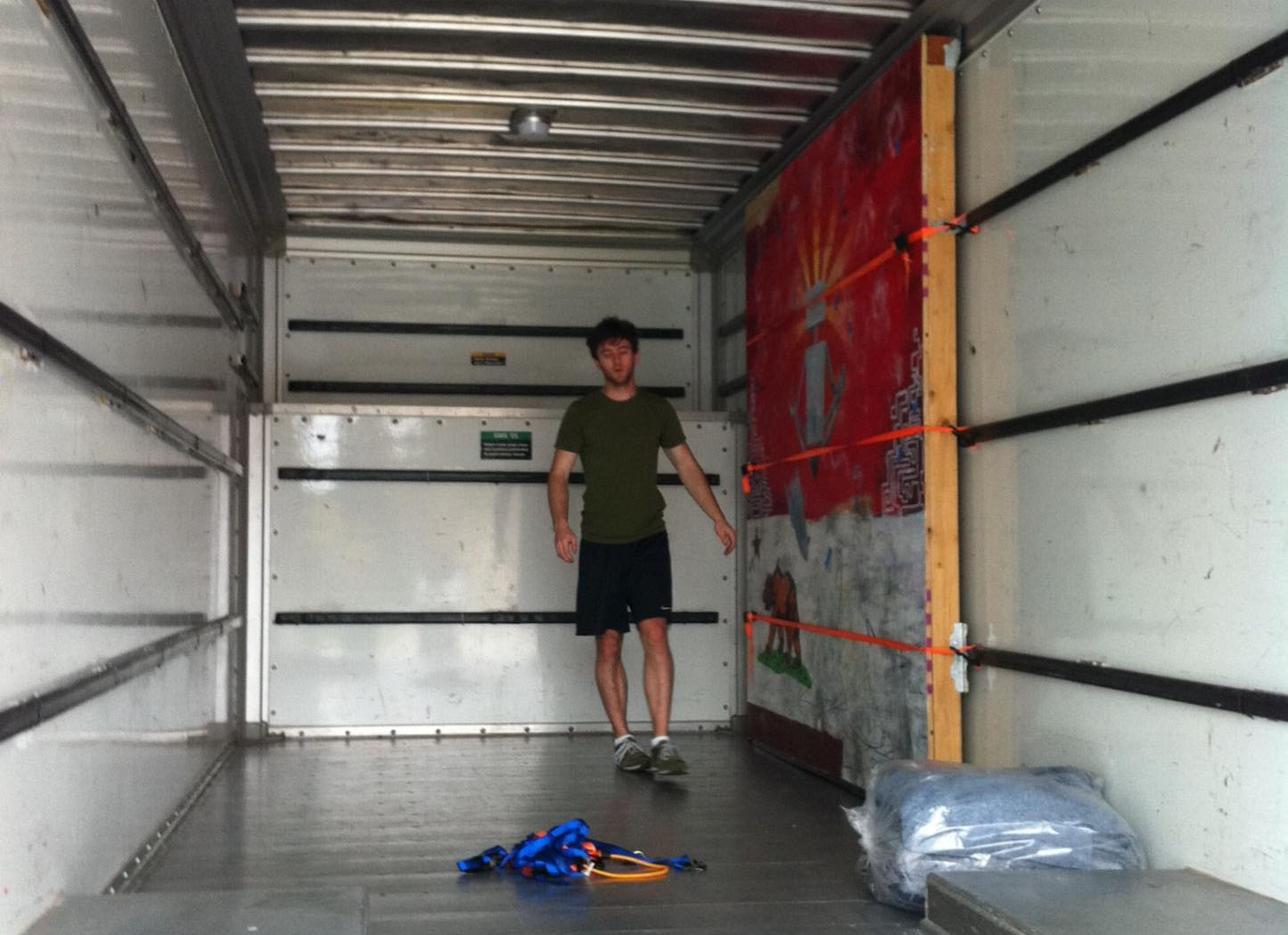 Unfortunately, we didn’t have room for it in the garage at the new place, so… We decided to build a frame for the wall so that it could stand on its own.

We didn’t have a concrete plan right off the bat, so we put our thinking caps on… And took our shirts off. 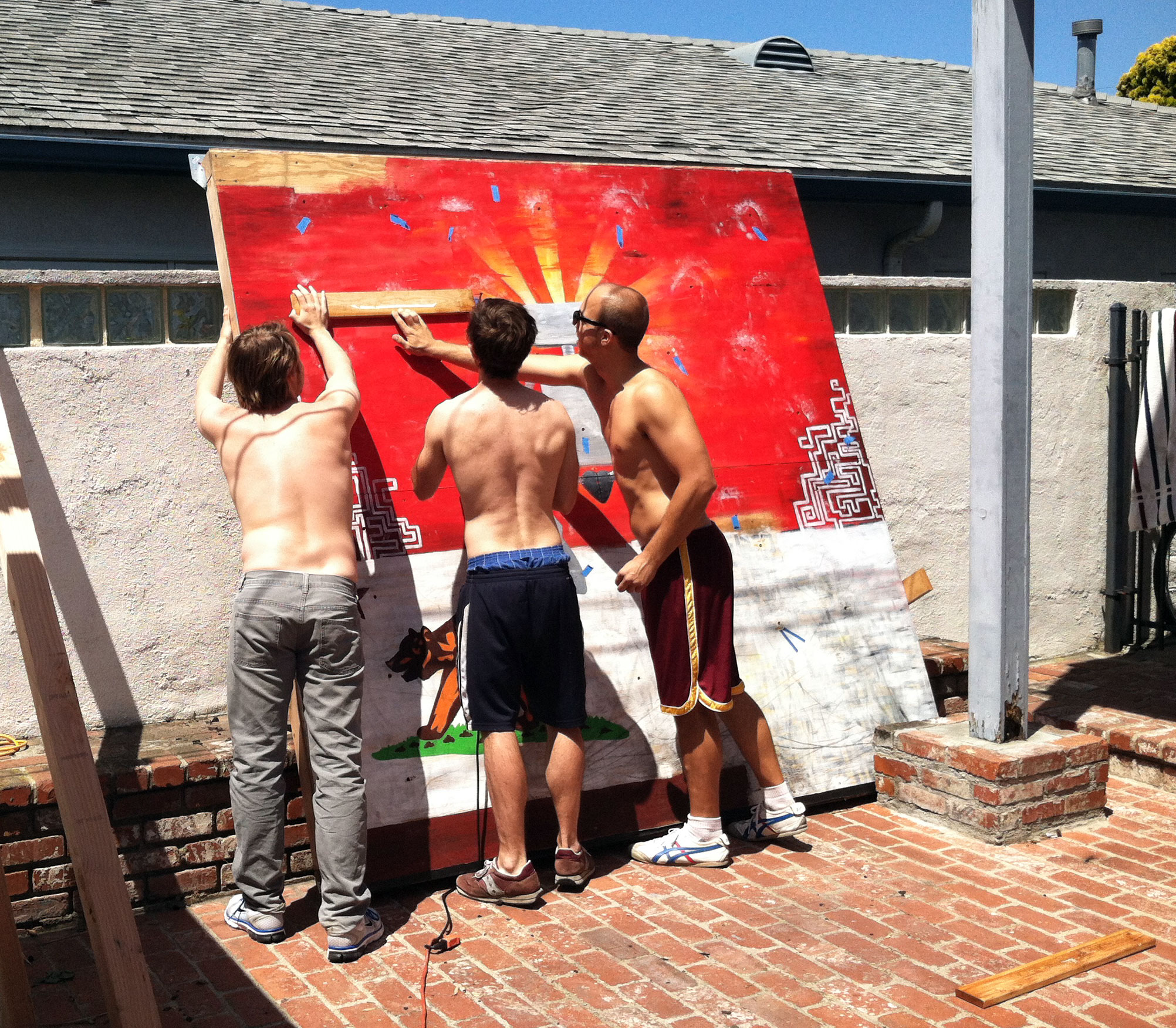 We drilled some holes (for bolts) into the side of the wall. This particular step doesn’t really require a visual, but I kinda dig the photo. 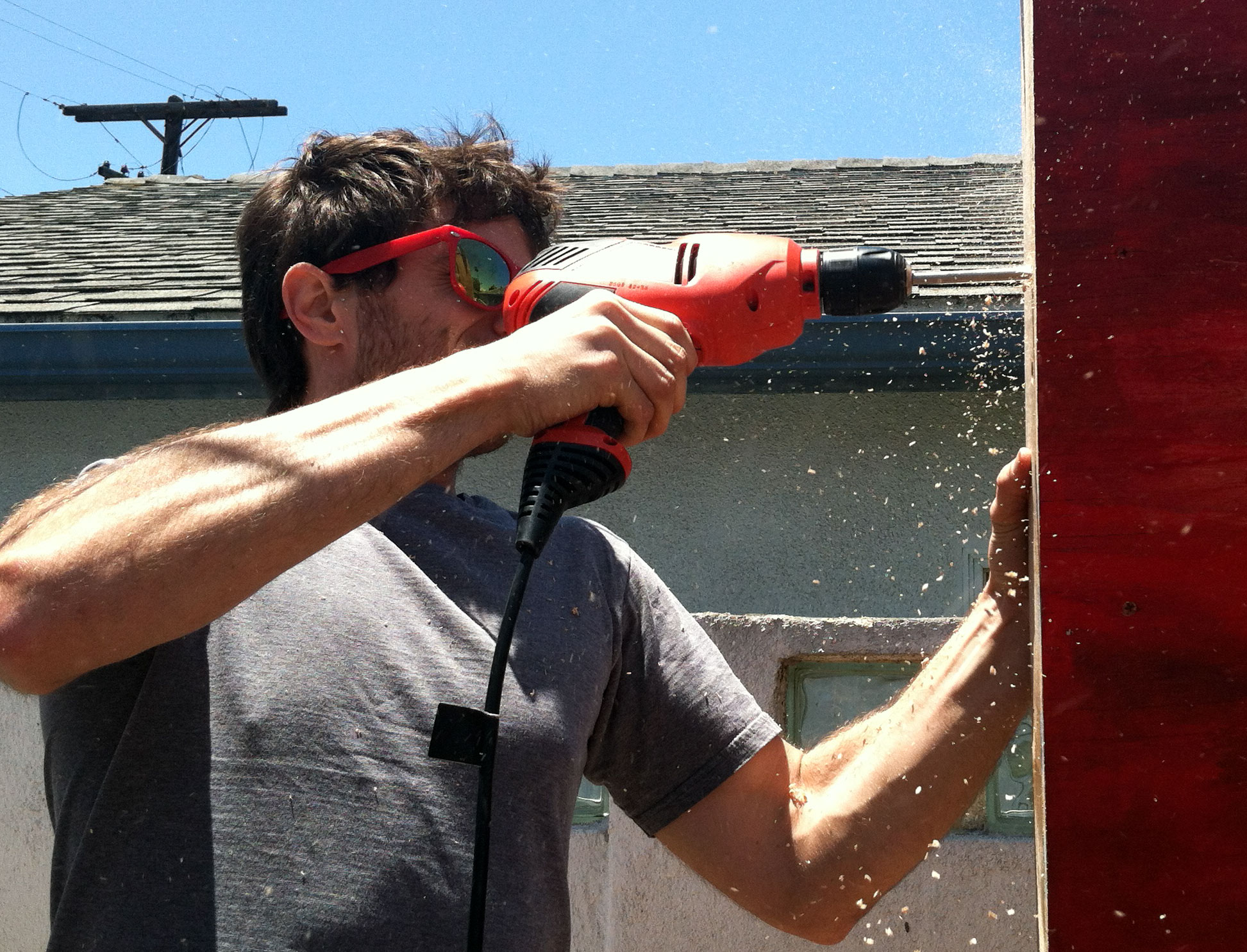 We then propped the wall up with some 4x4s. 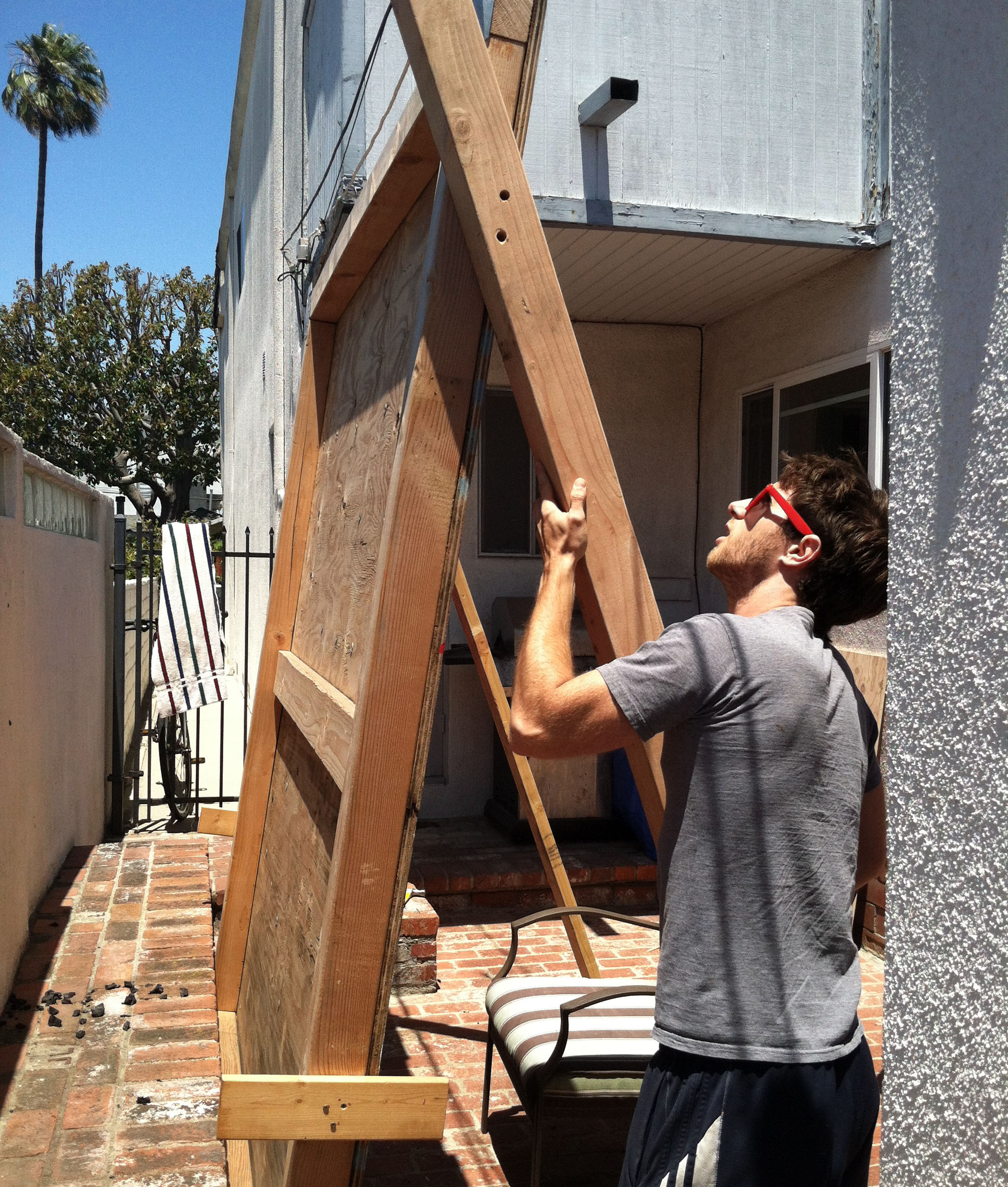 These 4x4s were vital in supporting the wall and allowing it to stand on it’s own, so they were connected to the wall with some big ol’ bolts. 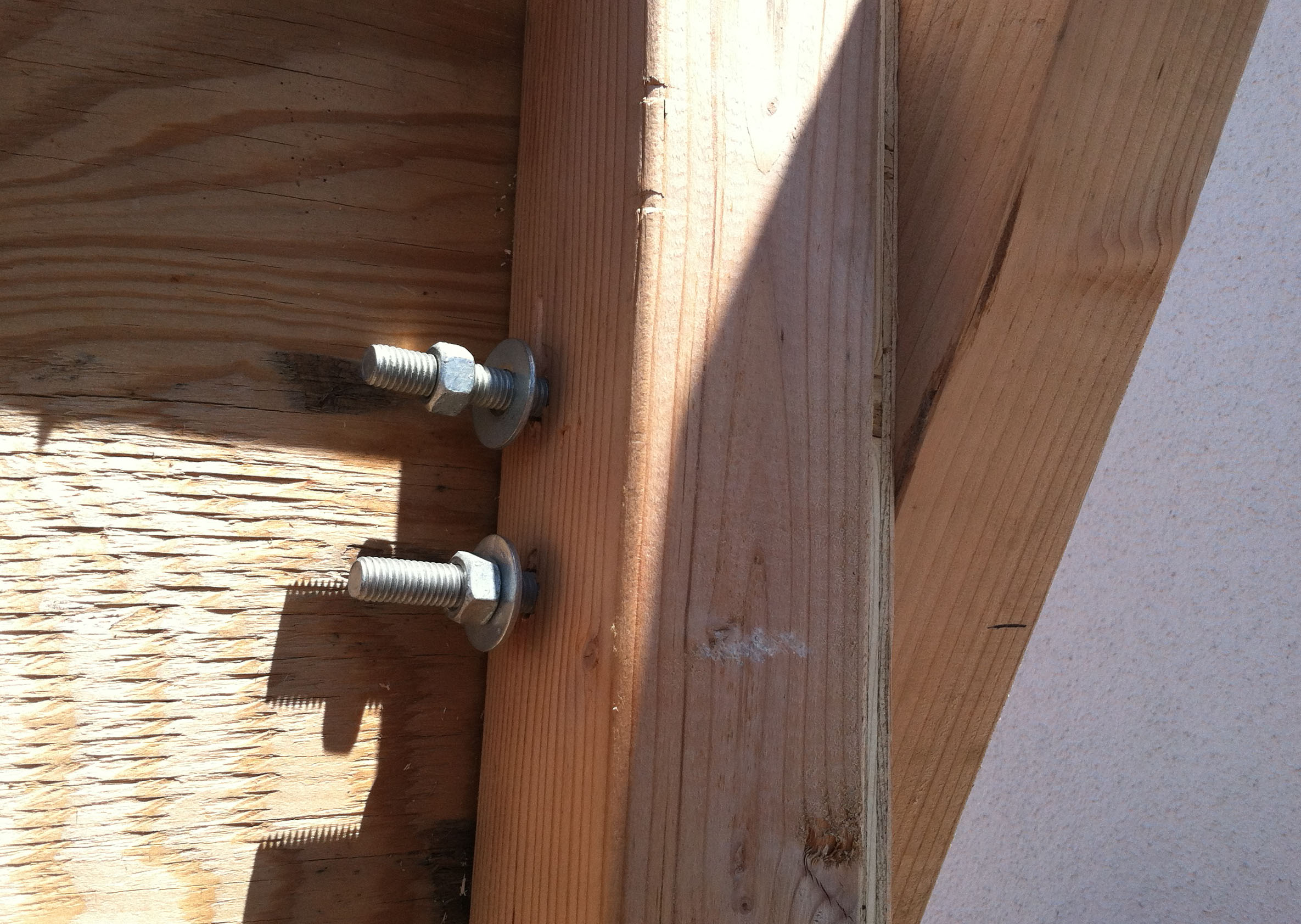 We cut two right triangles and attached them between the new supporting 4x4s and the wall itself to provide additional support and stabilization. 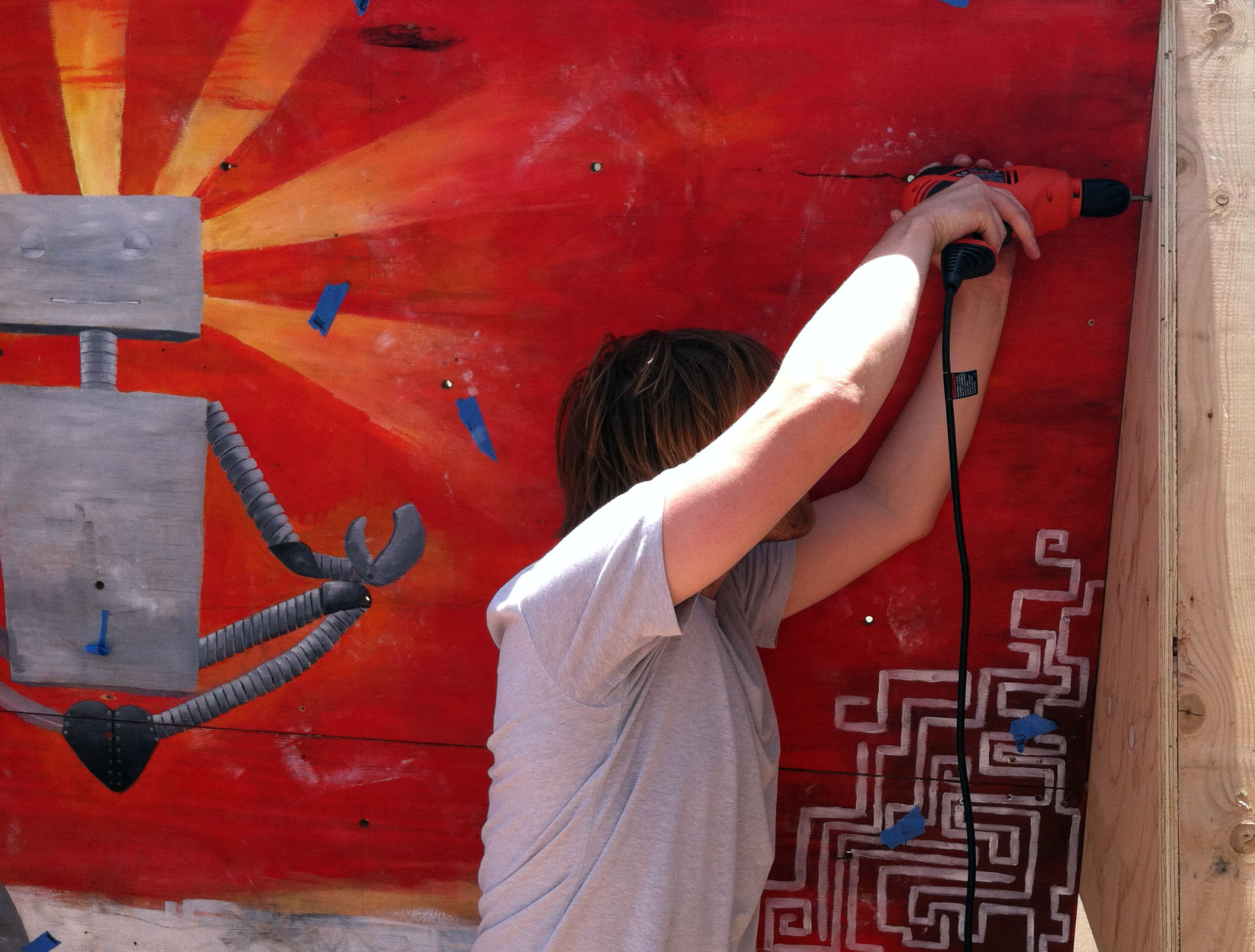 This new, freestanding rock climbing wall ended up being even more awesome than it’s garage-dwelling predecessor.

Stepping onto my back patio and climbing in the warm California sun, and occasionally catching a cool ocean breeze (we’re less than a mile from the beach) is pretty much the greatest thing ever. 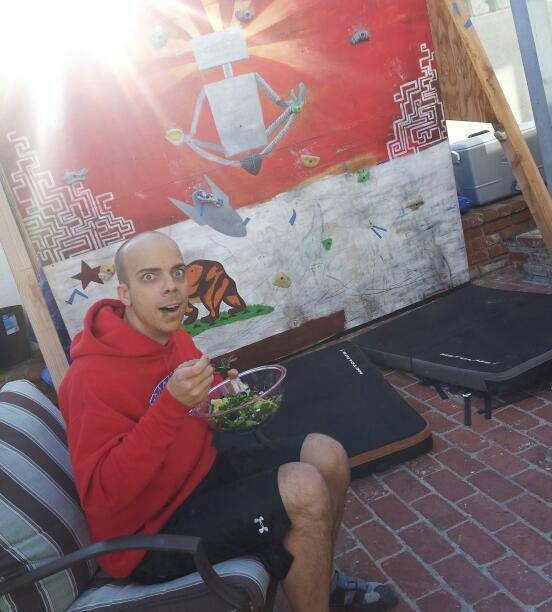 At this point, we’ve gotten much better at coming up with routes. We even brought in an intern route setter. 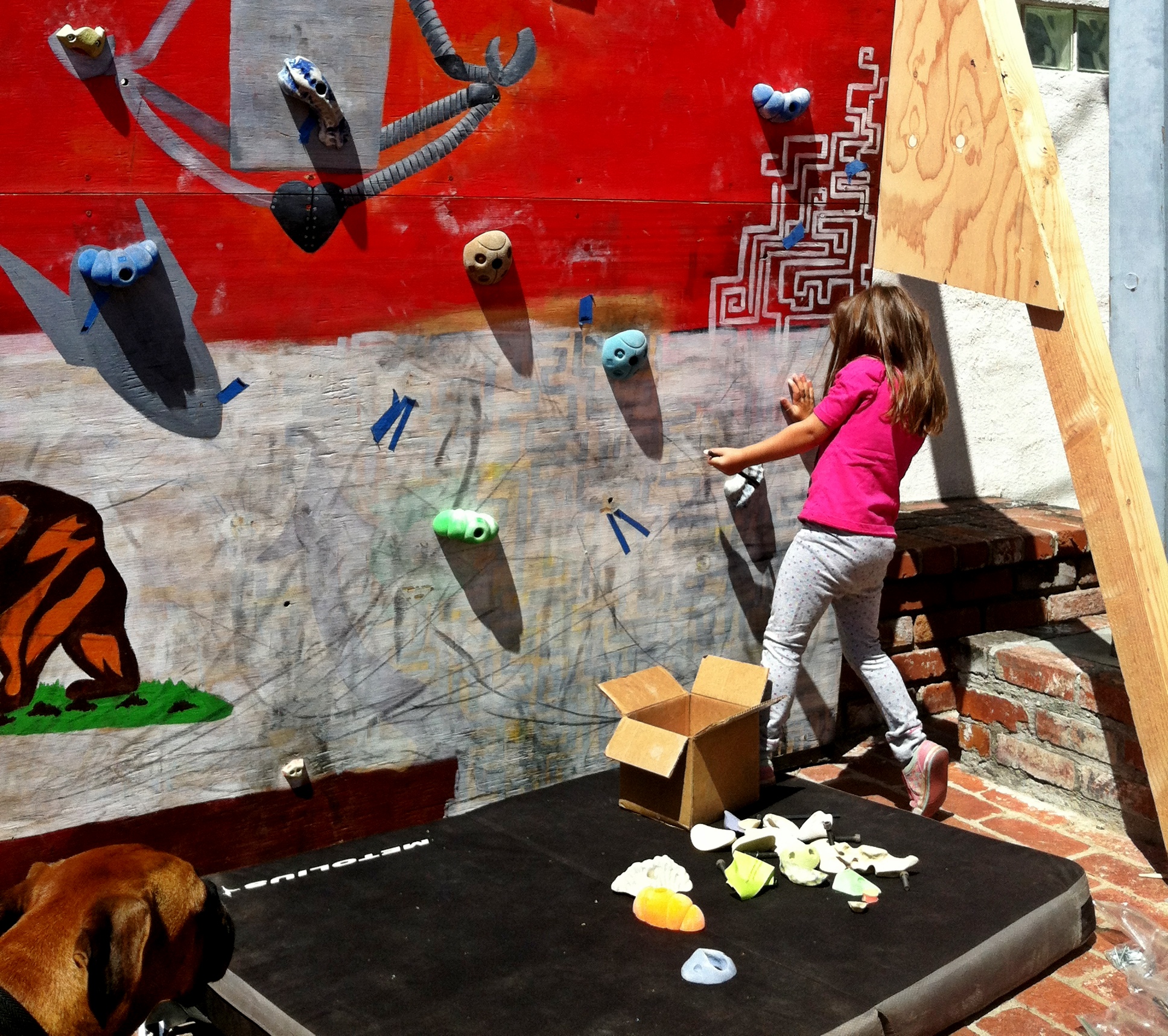 The majority of the holds that I have at this point came from Element Climbing, who make awesome climbing products.

Our lease is up this month, and the home climbing wall may not be coming with me to my next home. As it turns out, yards are hard to come by in Southern California! Then again, the climbing wall may just end up bolted to the wall in my living room… Only time will tell.

If you’re interested in building a rock climbing wall for yourself, just make it happen! We talked about it for a while and then one night we decided to just get in the car and head to Home Depot and figure it out. Once we took that step, everything else fell into place very quickly.

If you’d prefer to take a more structured approach towards building a climbing wall, there are a lot of guides out there, but I think it’s also dependent upon what you have room for. I’d like to think that at some point in my life I’ll have a lot more space (and disposable income) to work with, and I’ll build a much higher wall, as well as a nice big wooden training board.

For now, though, I’m happy with what I have, and my local climbing gym (in Santa Monica) isn’t too shabby either.