I Built A DIY Vinyl Record Shelf, And You Can Too! 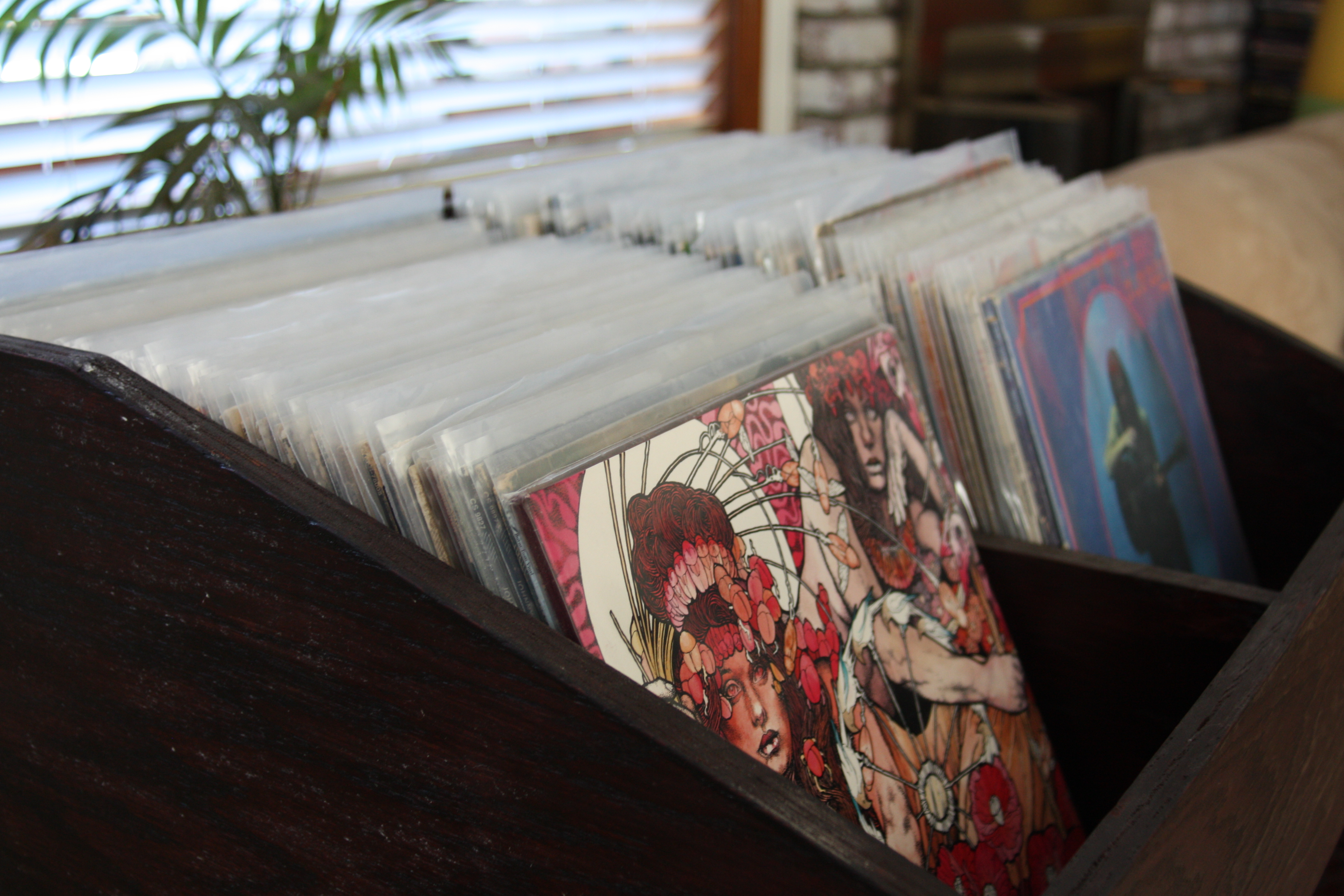 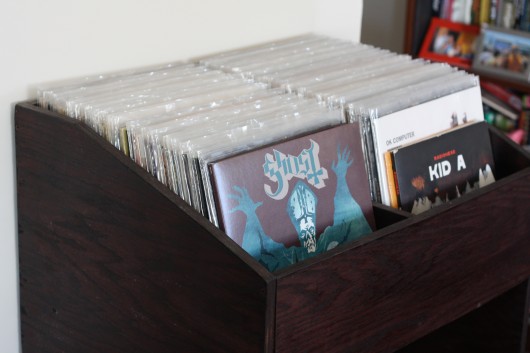 I like music. A lot. Last year, a friend of mine got me into vinyl. I bought a turntable and a few records, and then I bought a few more. After I went to my first “record swap” (basically a giant flea market for records), I realized that I had the vinyl bug. As my pile of records grew taller, I came to terms with the fact that I probably wouldn’t stop purchasing them anytime soon.

Soon after, it dawned on me that I was gonna need some sort of record organizer/record bin to store them in. I CAN’T STOP BUYING RECORDS.

While perusing /r/vinyl, I came across these plans to build a wooden record bin from a single sheet of 4×8 plywood. 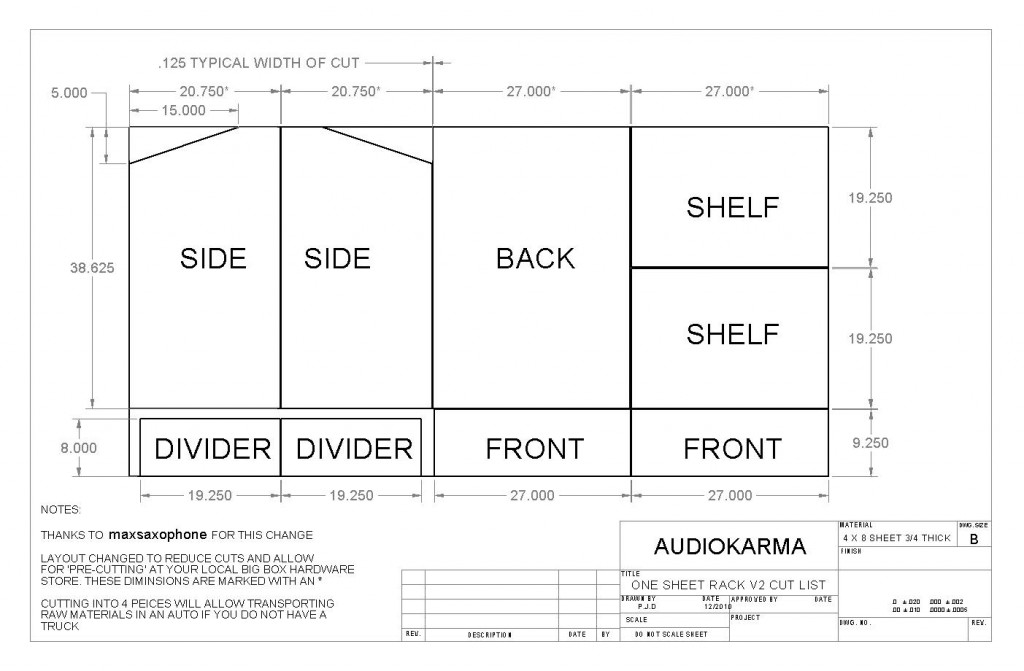 Please note that these plans originated from this thread on Audiokarma.

To clarify, I’m not looking for validation here, but there’s something about buying lumber and using tools that just seems “right”. It’s a lost art in this day and age!

So my friend Nick and I took an early morning trip to Home Depot and picked up some lumber. Two sheets of 4×8 plywood, as we were both planning on building record storage shelf holder bin thingers. Here’s a very exciting shot of said plywood, taken just MOMENTS before we paid for it. Make sure you’re sitting down for this one. 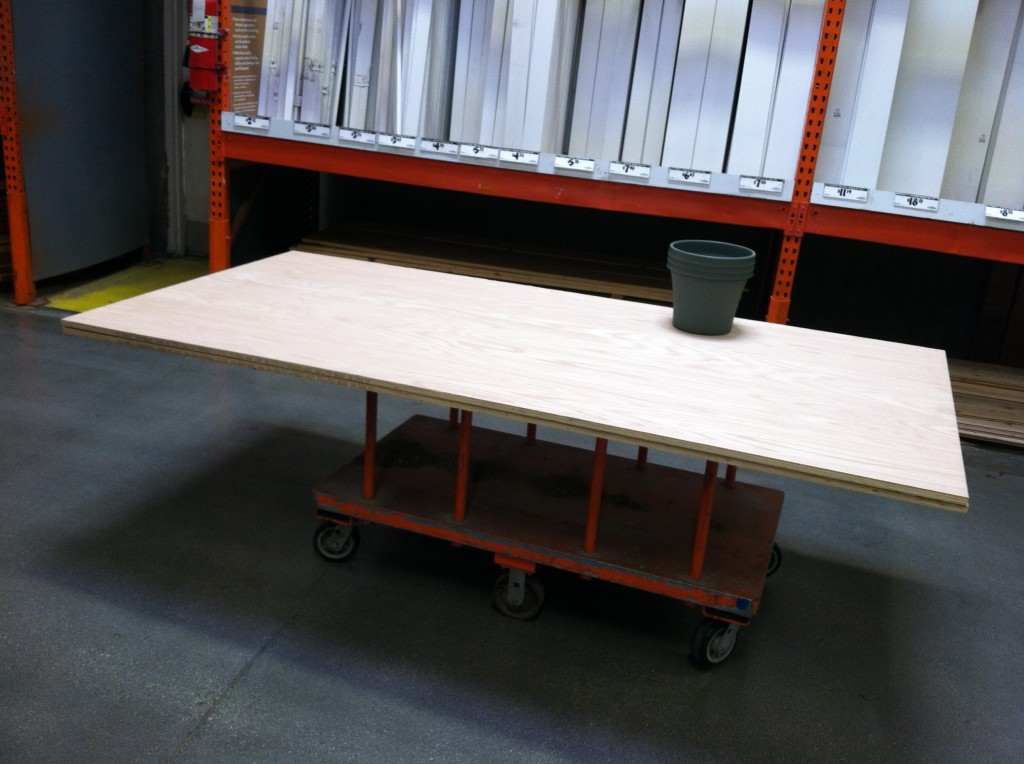 We actually had a friendly Home Depot employee help us out with some of the bigger cuts, so that we could fit the wood into my car, and to save us some work later on, as we only had access to a handsaw.

Blessed with a beautiful day and ice cold Yuengling Lager (brought all the way to Los Angeles from Pennsylvania), we got started right away. 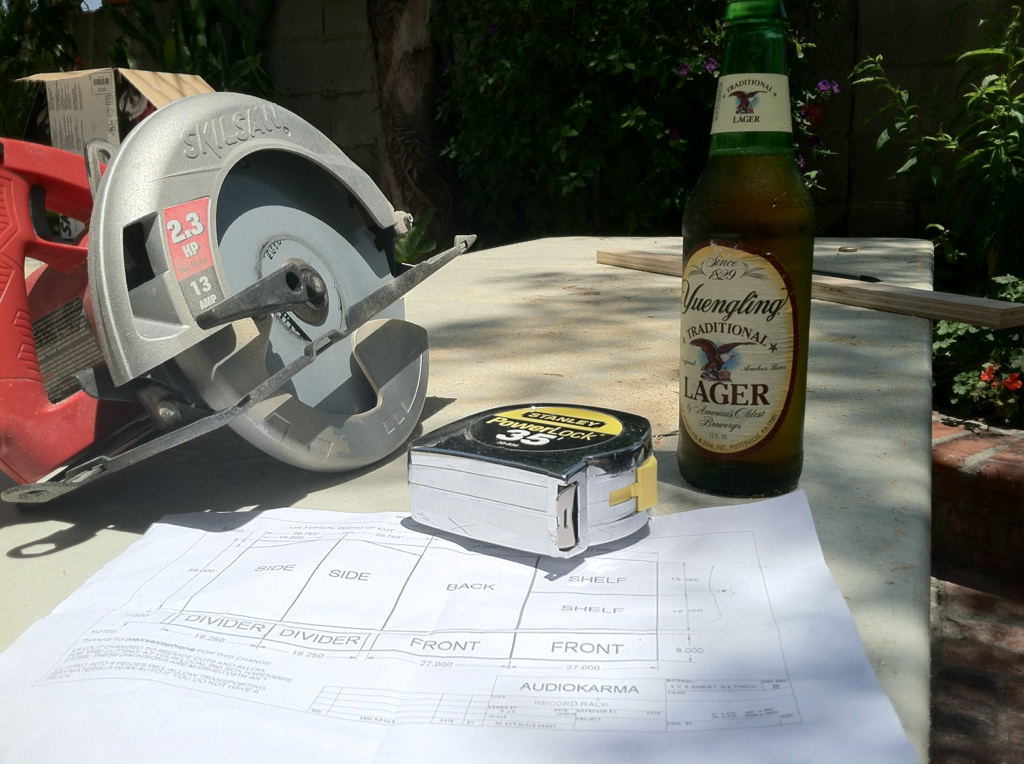 Some of the cuts done by Home Depot were pretty rough, and the wood had splintered a good bit, so we spent awhile sanding it down.

Once we smoothed everything out, we started to put the first wooden record organizer together, and I realized how awesome this was going to be. 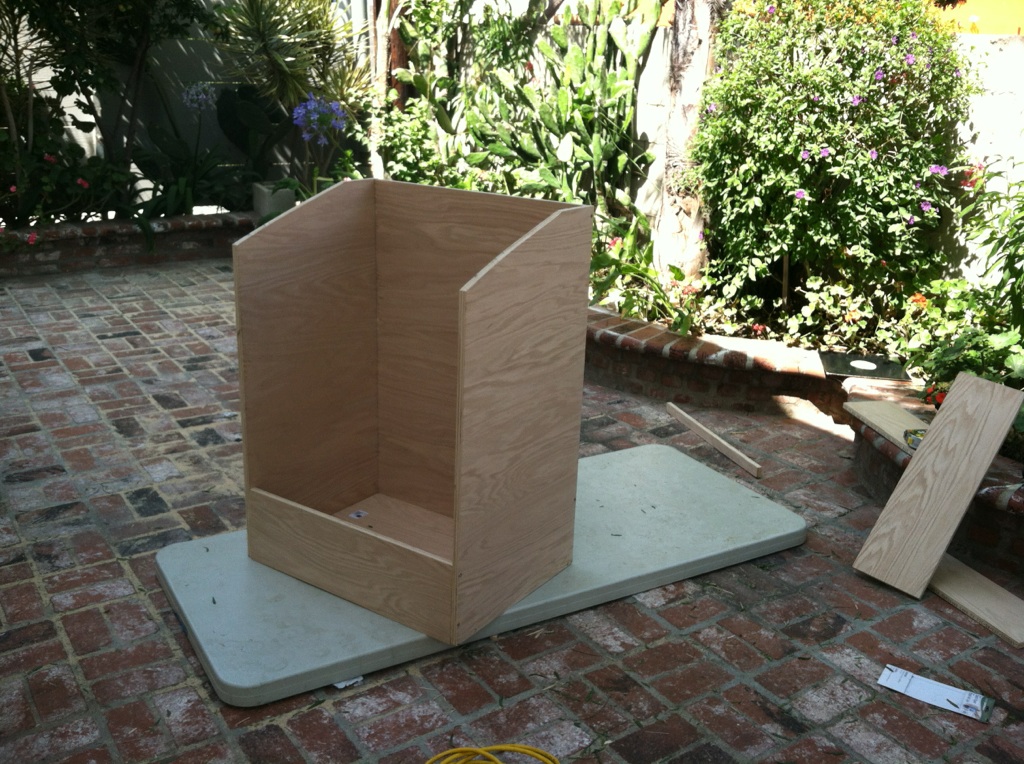 Once we inserted the dividers, we dusted these bad boys off… 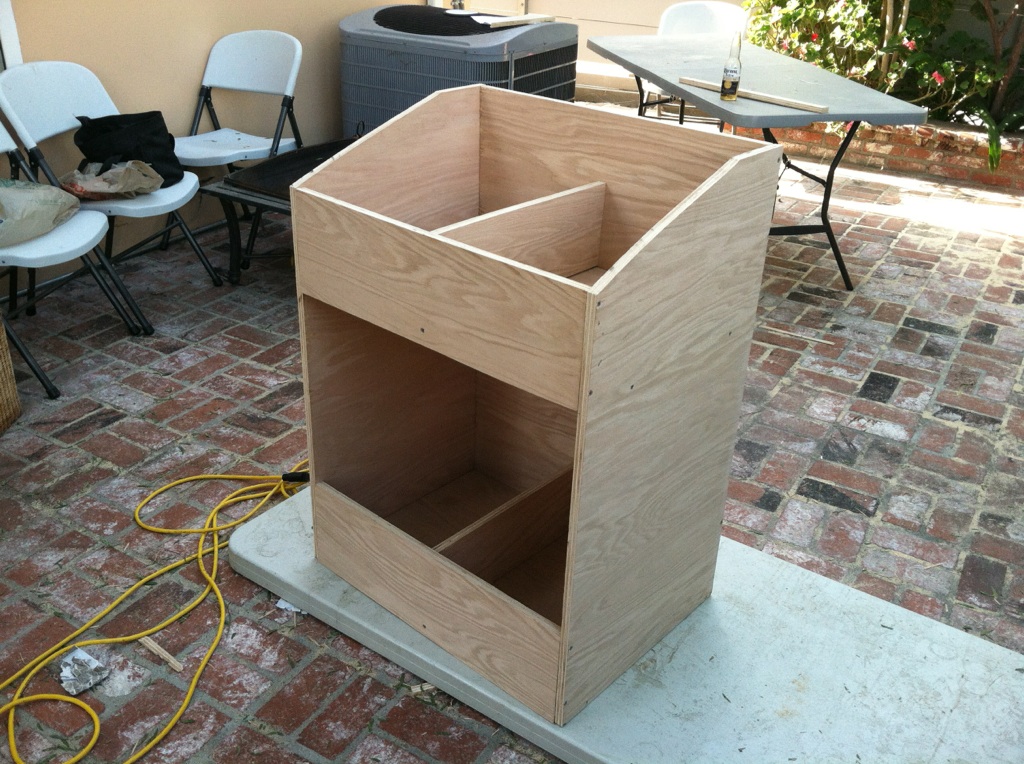 And put them inside the house next to one another – to marvel at the beauty of our creations. The dividers look crooked, but it’s just the angle at which the photo was taken. 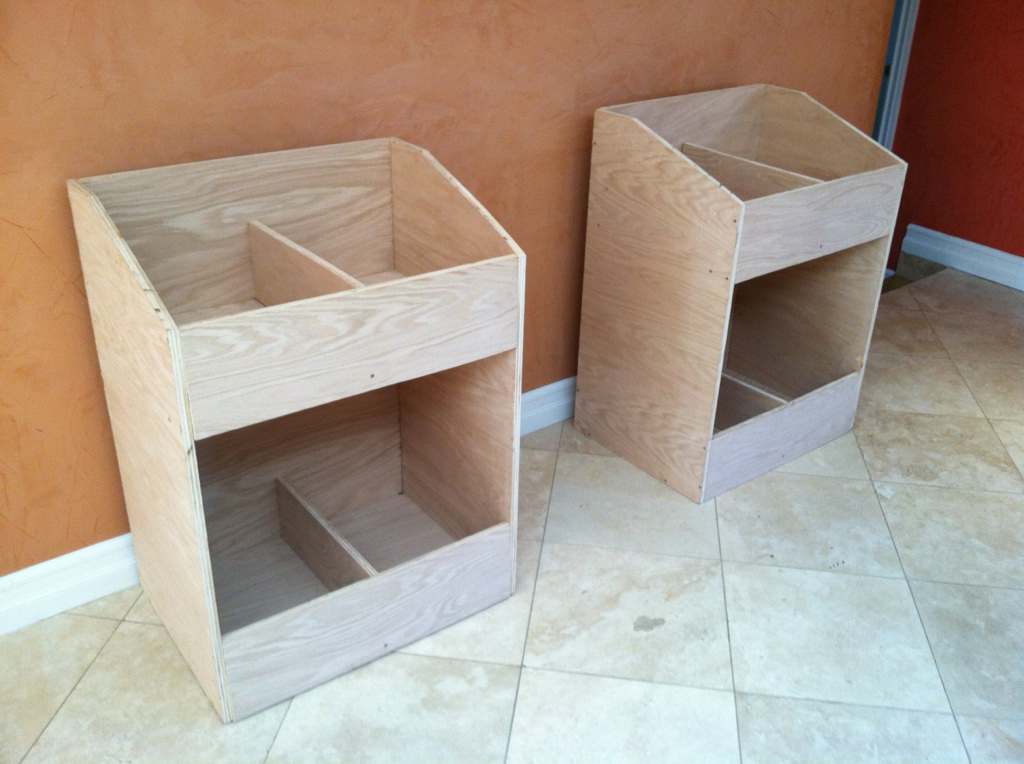 I then sanded the record shelf quite a bit more to prepare it for the application of a polyurethane finish. 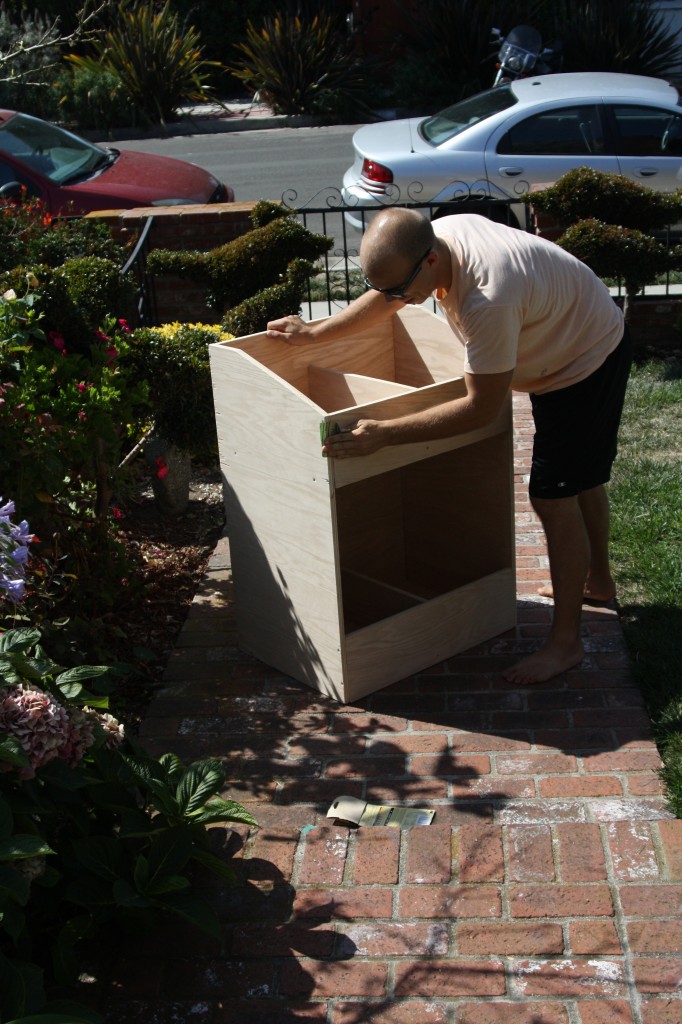 Lauren helped out too. 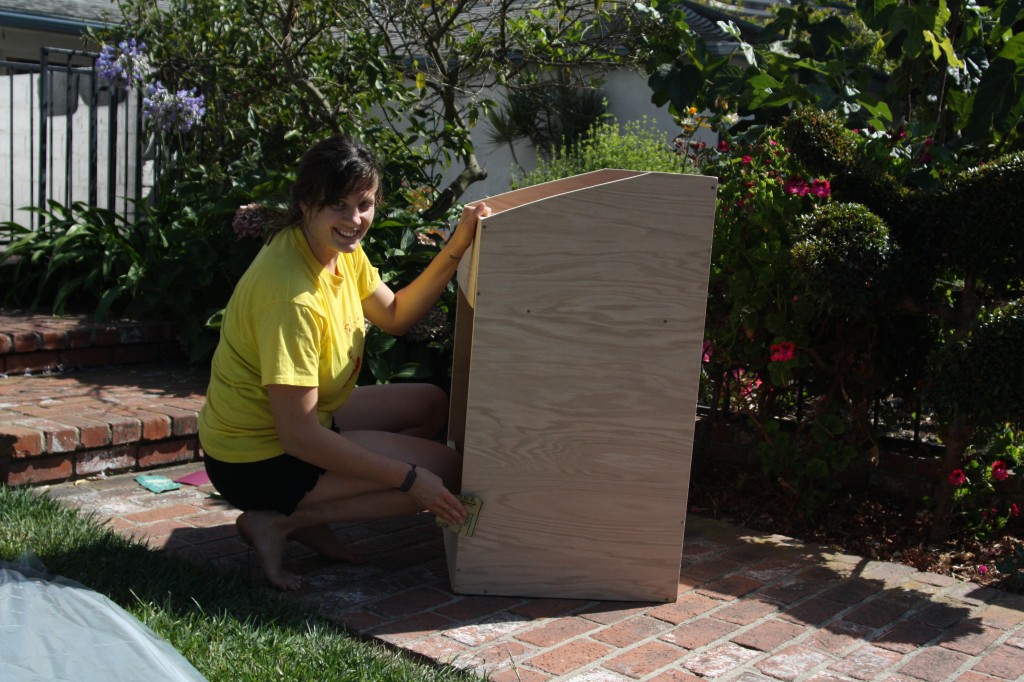 We then painted on the polyurethane finish… We actually did two layers, as the first layer didn’t look as dark as I had hoped. 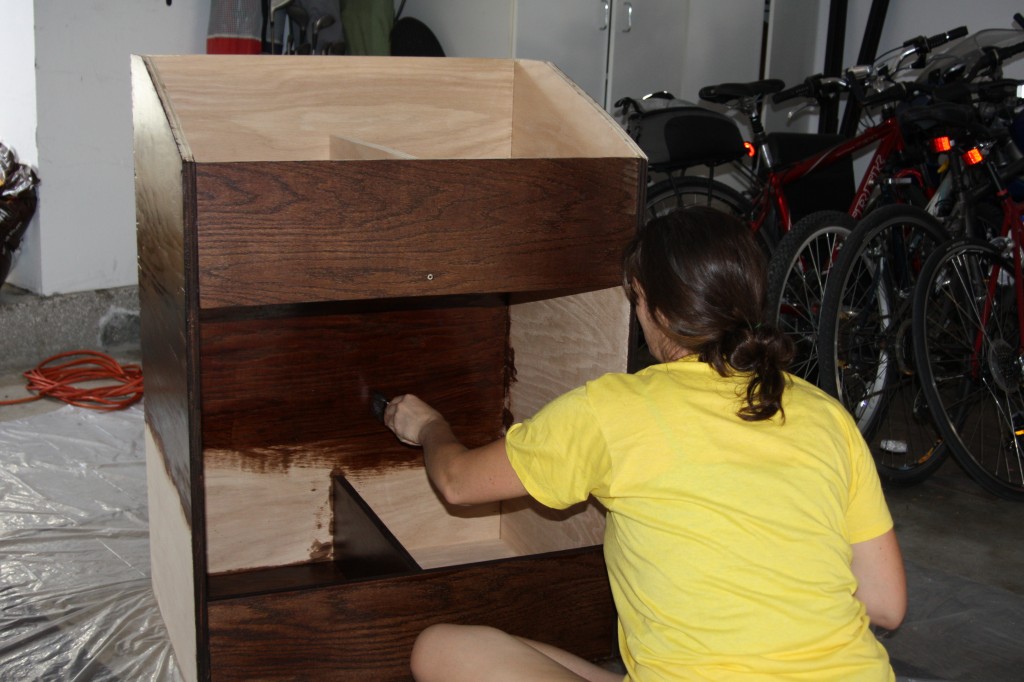 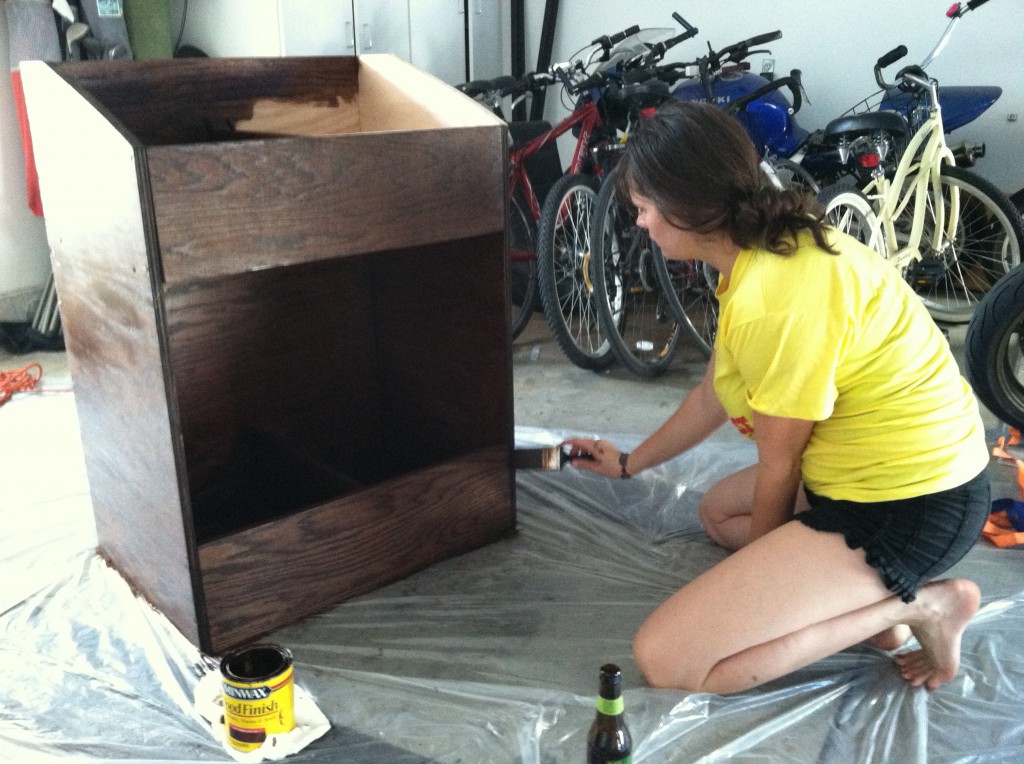 We waited a few days for the stain completely dry, then brought it inside and moved some records into it! 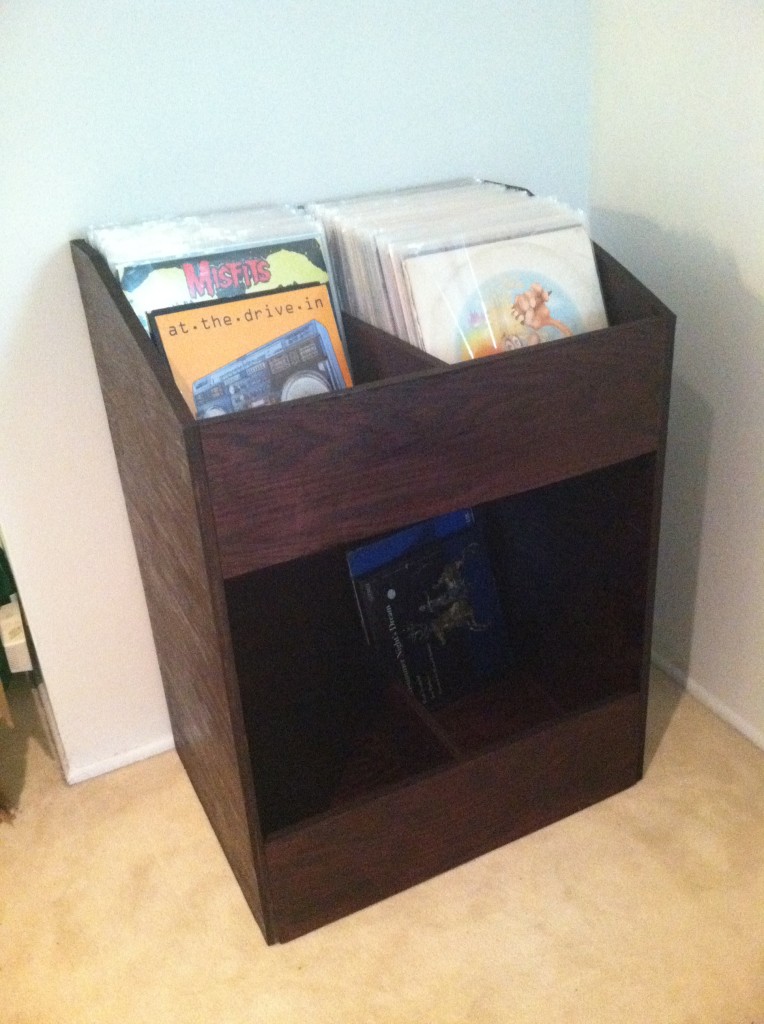 While the quality of the photo above (shot in low light) leaves a bit to be desired, I’m very happy with the results. Apparently this record storage bin can accommodate from 5-600 records, assuming the record sleeves are 1/8″ thick. I probably have around 200 records now – the above photo was taken several months ago, and I’ve gone on several buying binges since then.

Edit: Here are some more shots of the finished vinyl record shelf. 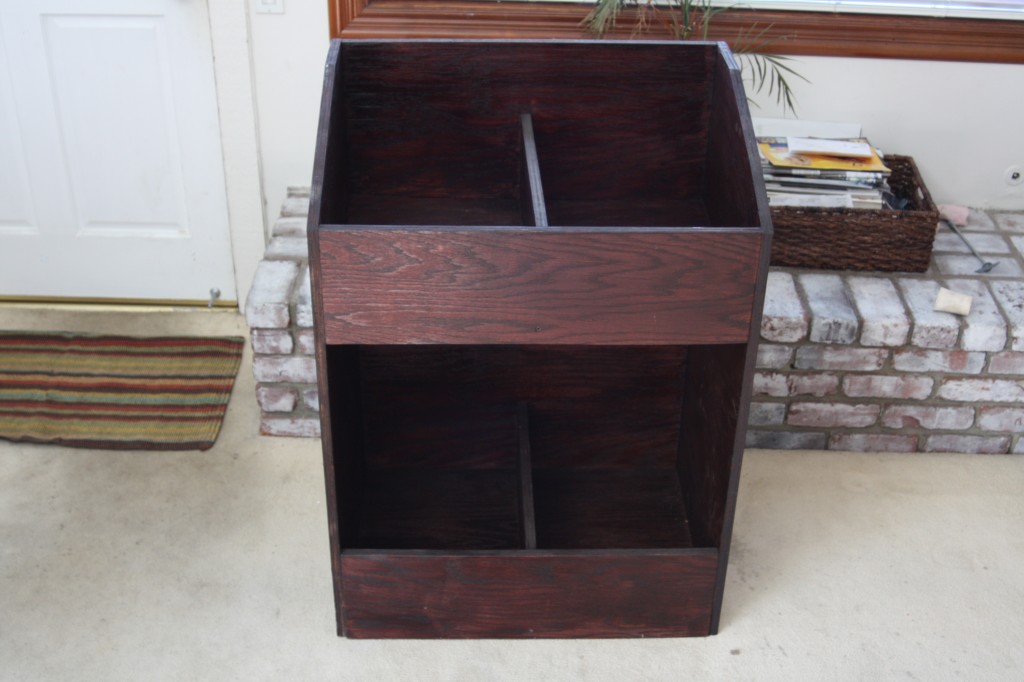 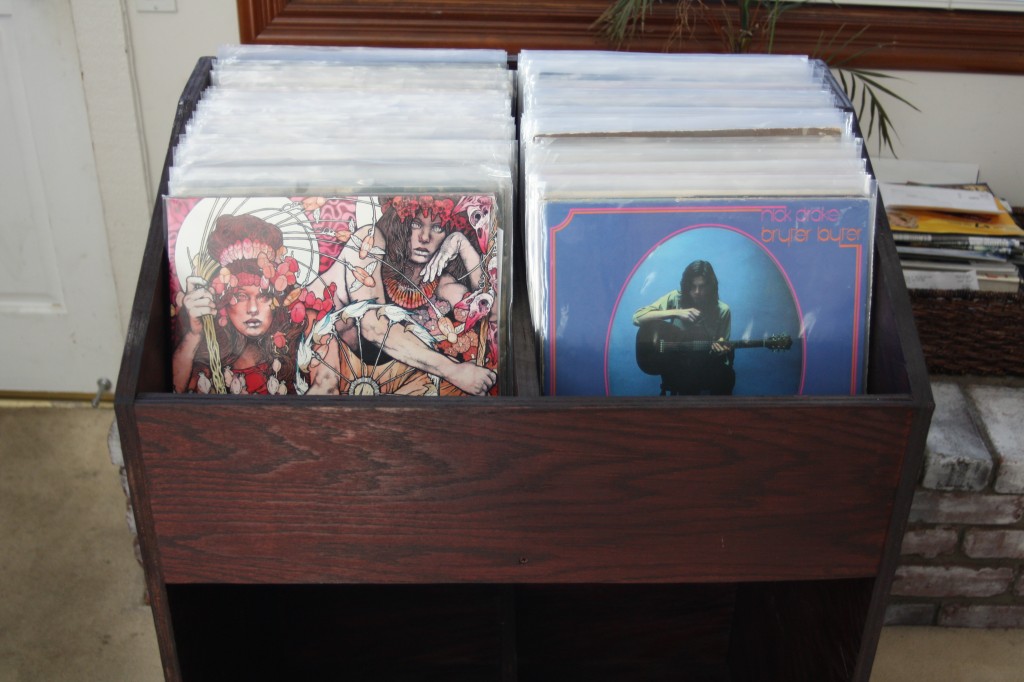 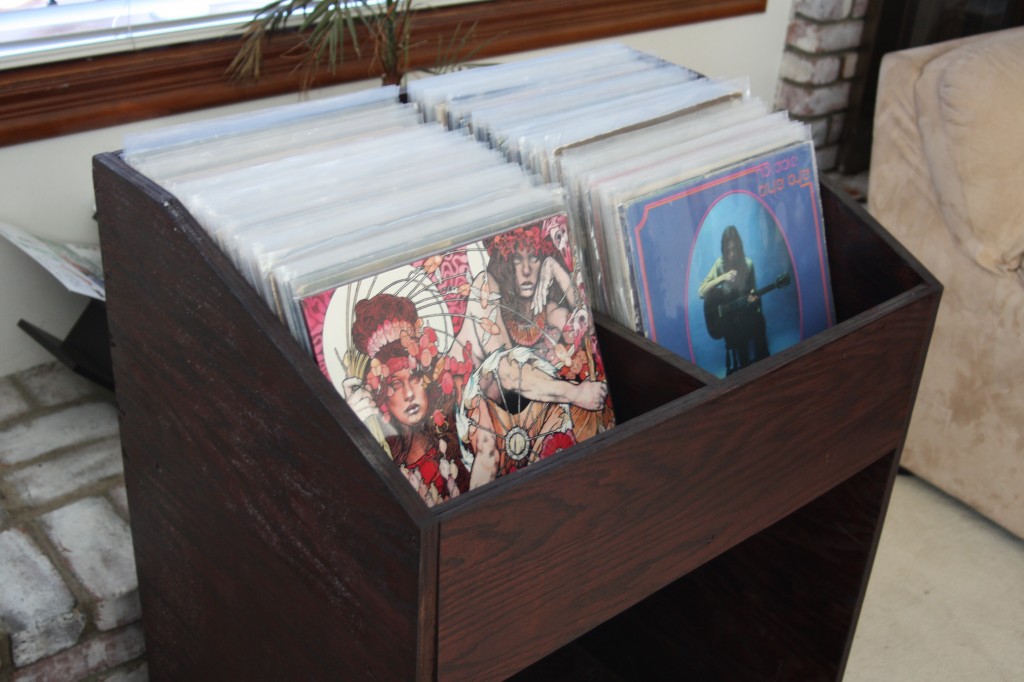 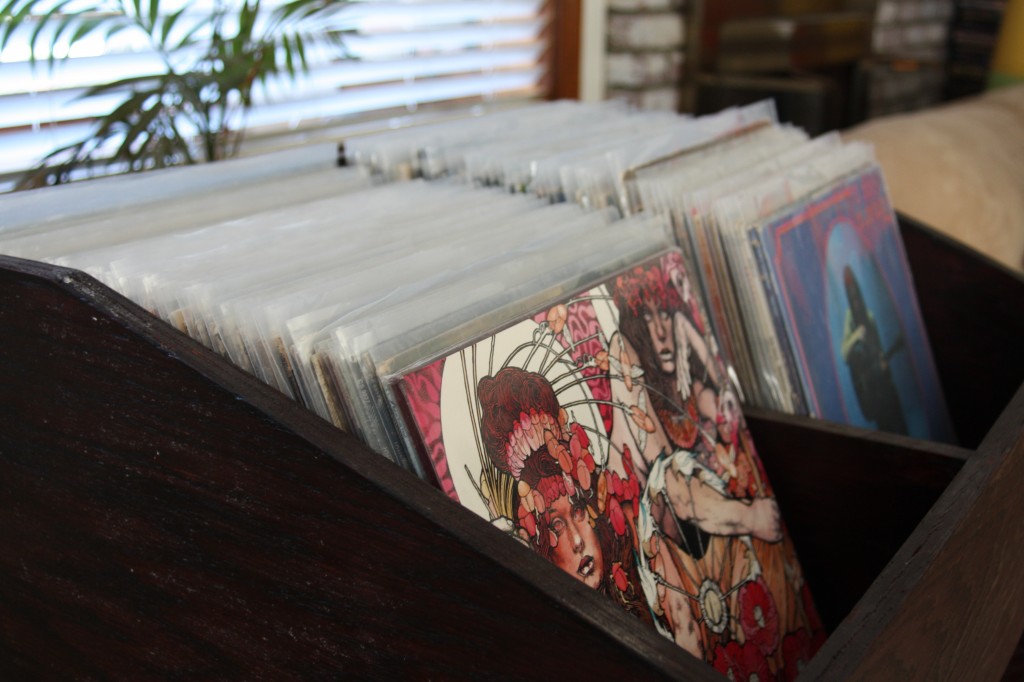 If you’re interested in building one of these awesome record shelves for yourself, be sure to check out this AudioKarma thread. It contains several sets of record shelf plans (for variations on the shelf itself) as well as more detailed instructions.

Rather than going to Ikea for your vinyl storage solution, why not just build your own? A homemade, “DIY” vinyl storage cabinet is a solid conversation piece. Almost everyone who comes to visit asks about the shelf, and it feels pretty cool to be able to say “I built this myself”. Just saying.