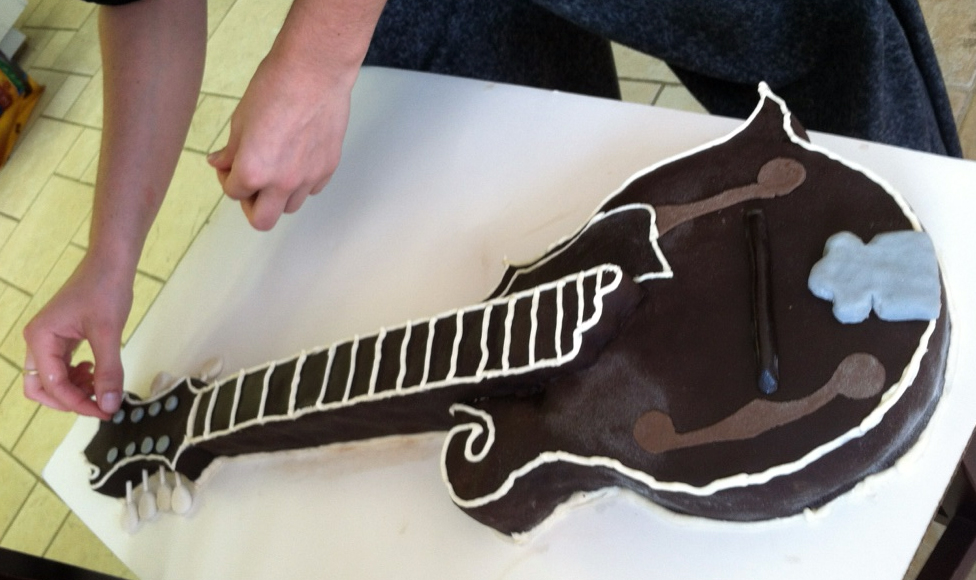 My girlfriend and I spent a good part of this past Saturday night/Sunday morning making a birthday cake for my roommate, Paul. He seems to be partial to the mandolin, so my girlfriend thought it’d be a good idea to try and make a cake that looked like the instrument. I had never done anything like this before, but I was confident that she knew what she was doing.

After some delicious homemade sushi on Saturday night, we baked two circular cakes and a crazy amount of rice krispy treats. We did our best to make sure that the rice krispy treats were all close to the same height… Roughly the height of 2 of the cakes stacked on top of one another. 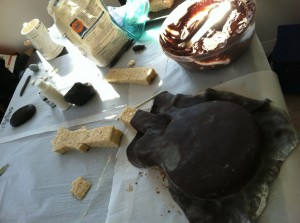 In the image above, you can see the basic body of the guitar. Two circular cakes were stacked on top of one another, and then rice krispy treats were used to create both the neck and the details (the curves and parts that stick out around the bottom of the base, I don’t know the proper term for these) on the body.

We used frosting as a sort of “glue” to connect the parts – we applied it to the rice krispy treats before connecting them to one another and to the chocolate cake as well. 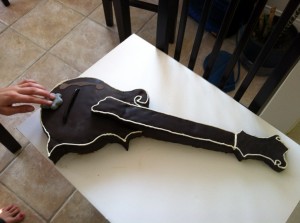 You can’t see the cake and the rice krispy treats that were used to shape this because we placed a layer of chocolate fondant over the whole thing. The fondant is like malleable, edible silly putty made of sugar. It’s awesome to work with for something like this, because it basically takes the shape of whatever you place it on top of. It’s like throwing a sheet over something, but it settles and kind of melts into it. 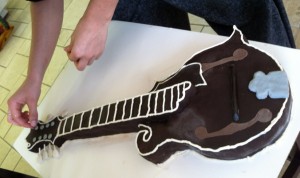 We also used the fondant for some of the details on the body. We used vanilla fondant with food coloring to create the tuning keys, the buttons at the top of the neck (adjacent to the tuning keys), the cavities in the body (those light brown shapes on the sides of the body), and the silver duder at the bottom of the body. That’s what they call it – a duder, right? It’s either that or a string post, but we’ll go with duder. We used the frosting to attach the fondant shapes to the cake. 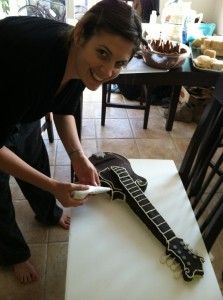 We used frosting to outline the borders and to create the frets on the fingerboard. We (I) also used frosting to cover and eat about 10,000 calories worth of leftover rice krispy treats during this whole process. 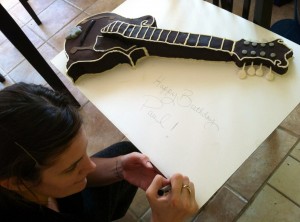 Walah! The cake is complete. It looks pretty damn good, if you ask me. I LIKE CAKE, HOW ‘BOUT IT?

We had so many ingredients leftover (frosting, rice krispy treats and chocolate cake) that they made up roughly 75% of my diet over the past few days. I never even touched the mandolin cake until today. I actually ended up bringing it with me to the Wpromote office, where it was promptly devoured. 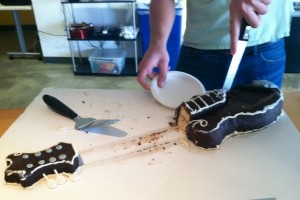 This isn’t exactly a step-by-step guide, but if you’re interested in creating something similar, don’t hesitate to get in touch with me via email/blog comments with any questions you might have. I’ll most likely pass them along to my girlfriend – she did the majority of the work here anyway.