Finding a reliable proxy host can be extremely difficult. I’ve been running a handful of proxy sites for a little under 4 years now, and I have yet to find a host that I’ve been happy with. Some hosts have worked out well in the short term, but after a few months, for one reason or another, things always tend to fall apart.

Last year, I posted a review of Fused Hosting. If you didn’t read it, let’s just say that things didn’t go very well with them, and I’d recommend avoiding them at all costs.

After that debacle, I decided to give VPSNOC (VPS Network Operation Center) a try… They offered VPS Hosting solutions and they allowed proxy sites on their servers, so I figured it was worth a shot. Unfortunately, there aren’t a ton of reviews of web-based proxy hosting services on the web, so I didn’t know better.

On October 11th, I created a proxy hosting account with VPS NOC.

I decided it’d be a good idea to use Pingdom’s uptime monitoring service to keep an eye on the sites, and get a feel for how much downtime (if any) I was experiencing.

On October 13th, the first Pingdom downtime notice hit my inbox. From that point on, it was basically a continual stream of downtime notifications. On most days, I got 15 to 20 of them. To give you an idea… 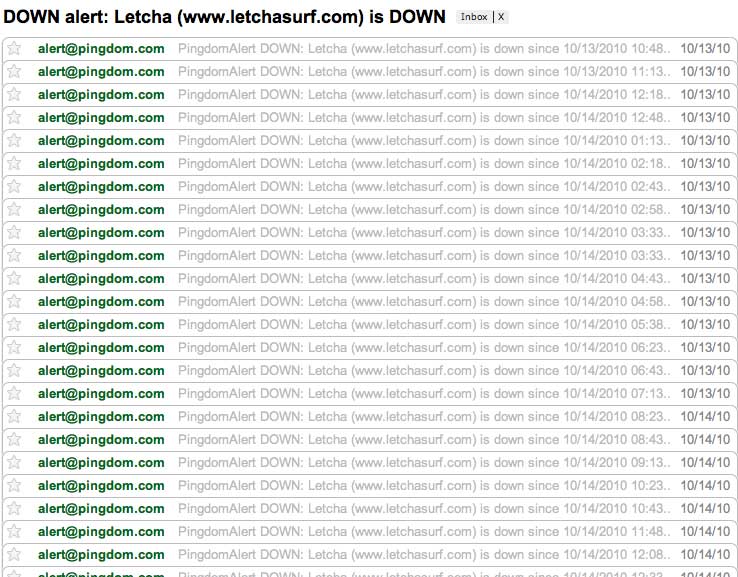 Notice that this is just a small sampling of the VPSNoc proxy hosting downtime notifications from 10/13 and 10/14.

I was hoping that this was just temporary, and that VPS NOC would get things back on track. Unfortunately, I was wrong. 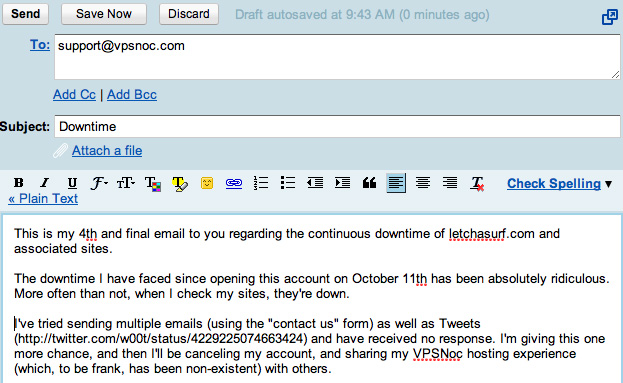 Any and all attempts on my part to get in touch with VPSNoc were unsuccesful. At times I wondered if they had anyone working there at all. Tweets, emails, etc all went unanswered.

I sometimes wondered if somehow I had blocked my own devices from connecting to the server. A quick visit to Down For Everyone, Or Just Me? straightened that right out.

The only beacon of hope were the billing notices. I still received these invoices for the proxy hosting “services” like clockwork each month – Even when my sites had been completely down for days.

Anyone with half a brain would have cancelled these “web hosting services” after the first month. I may have a little too much fun on the weekends, but I pride myself in having at least half a brain left. I’m a pretty busy guy though, and between work, freelance work, and extracurricular activities/social life, I wasn’t able to find the time to properly research a new proxy hosting company.

The holidays came and went, and at the end of December I found a new webhost.

I tried to cancel the VPSNOC proxy hosting service in January, when I had all of my files transfered over to the new host.

I sent my first cancellation request email to VPSNoc on January 12th. Nothing. I tried again on the 13th… And yet again on the 18th. None of these emails were replied to. I didn’t want to just *cancel* through the cpanel, because I felt that the company owed me a refund of some sort – not only because of all of the crazy downtime that I faced, but also because I was charged for over a month’s worth of hosting that I wouldn’t be using. I also tried calling the business number listed on their website. Both times I called, it went straight to an answering machine. I left detailed messages with my information and requested a callback, but naturally I never heard anything back from them. Surprise, surprise.

I finally decided to just chalk it up to a loss and cancel my account through the cpanel, since I didn’t want to be charged for a second month of service in a row that I wouldn’t be using at all. One month of proxy hosting service, down the drain. Crappy, but certainly not the end of the world.

However, my account cancellation requests still haven’t gone through. VPSNoc.com is still sending me invoices for hosting. Is it possible that all of the owners were kidnapped or something?

The new proxy host? So far, so good. Due to the fact that I’ve experienced next to no downtime with this new host, my network of web-based proxies are picking up steam again, and now I have a new issue to deal with – bandwidth overages! I think that any webmaster will agree that this is a much better problem to have than downtime, though.

Needless to say, I would not recommend utilizing VPSNOC for any type of hosting. Downtime of any sort is unacceptable, but when your sites are down for days at a time and you can’t get ahold of anyone to resolve it… Well, that’s just ridiculous. As you can see, the support is non-existent, so avoid using VPSNOC hosting services entirely.