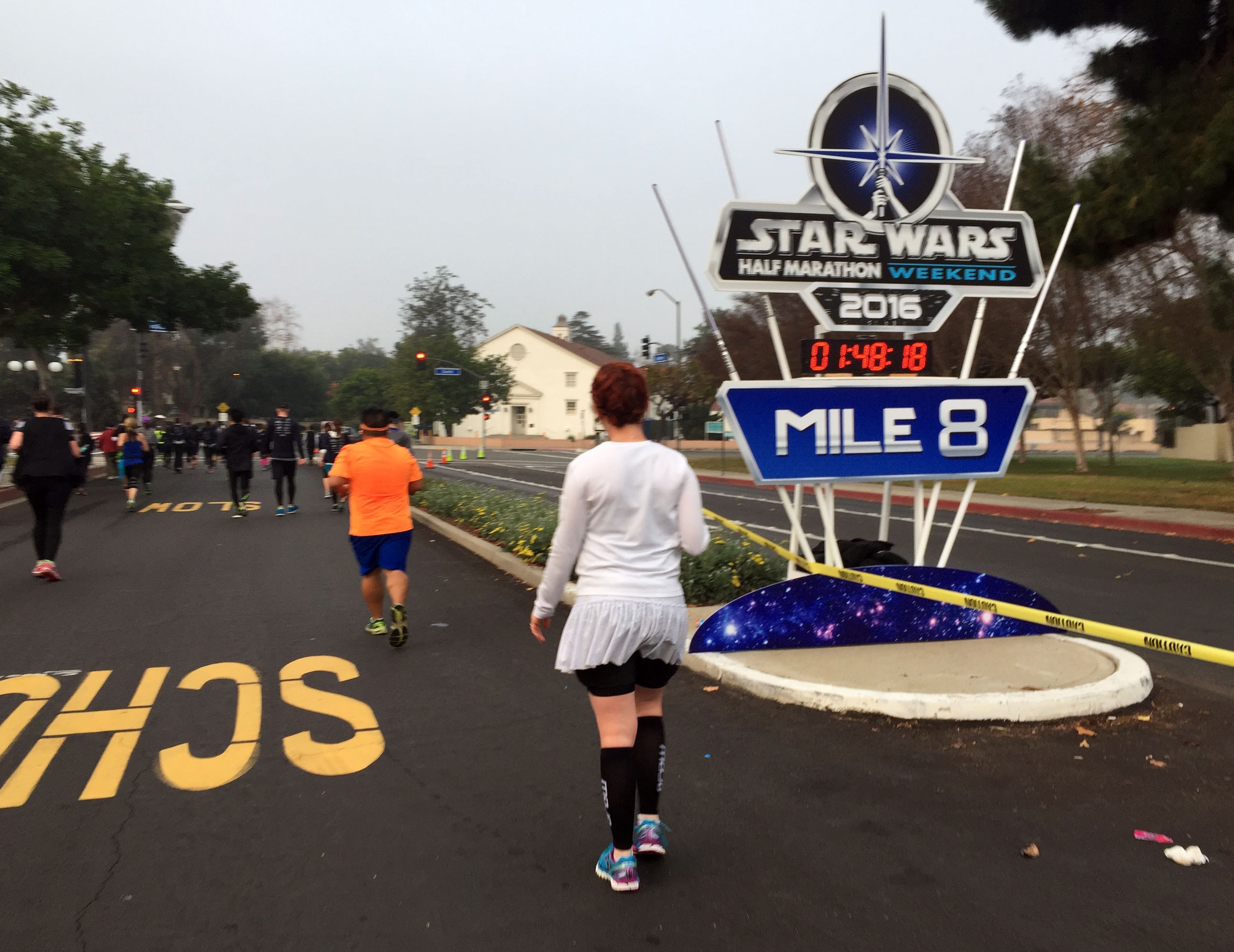 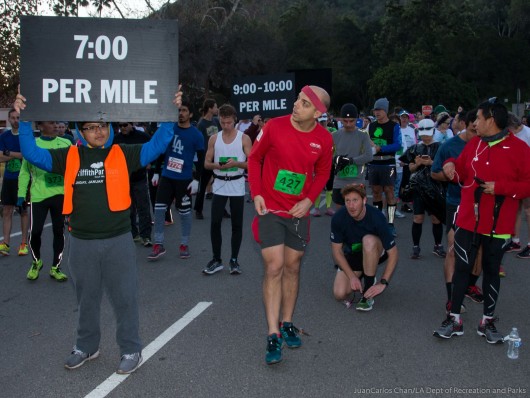 I hadn’t planned to run two half marathons with one week apart, but I’ll get to that shortly.

Rather than focusing on improving my half marathon time, I ended up doing 2 full marathons in 2015 (Big Sur and San Diego) which kept me pretty busy.

When my brother-in-law Eddie asked me if I wanted to run the Star Wars Half Marathon with him, I said yes immediately. I knew it was time to start training again.

I began my training this past October, 12 weeks prior to the race, per Hal Higon’s training guide.

The training went great. I took the speedwork days more seriously and paid more attention to my pace than ever before.

January snuck up on me quickly, and before I knew it, it was race weekend.

We headed down to Anaheim early on Saturday to check in at the race expo, which was pretty entertaining and well organized. Lots of cool Star Wars photo ops. 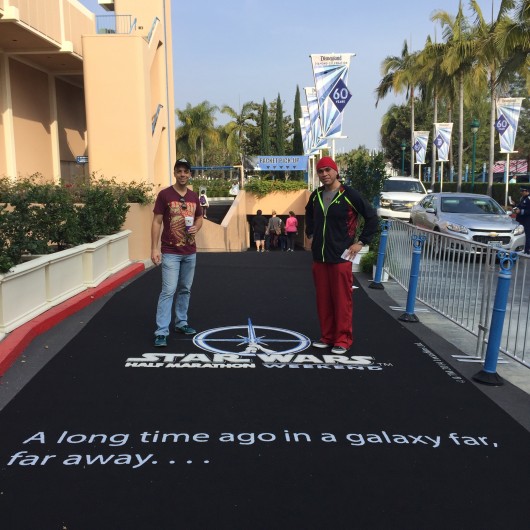 After the expo, we spent the rest of our day inside of the park. 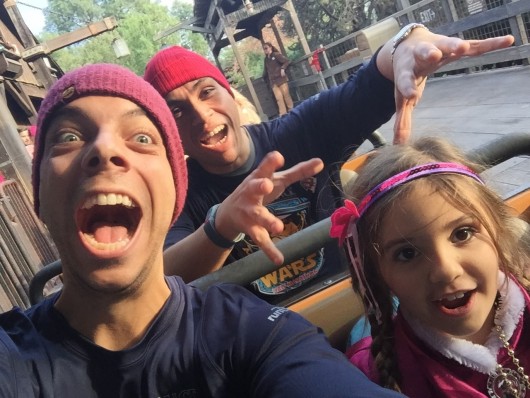 That evening, we stayed at the Hilton Anaheim. This was super convenient, as it was very close to the park, which meant that I got a decent night’s sleep before the run… But not before watching the Disneyland fireworks display from the comfort of our room! 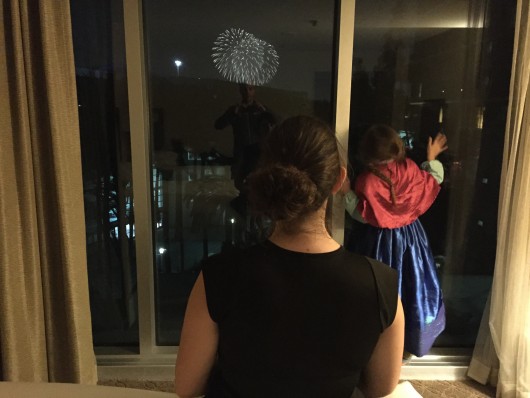 Eddie and I got up at 4:30am, prepped for the race and got on the shuttle to the starting line.

I love the feeling of pre-race excitement buzzing in the air. Thousands of runners warming up and getting ready for the big event while the rest of the world is still sleeping. It’s one of my favorite parts of these race events. 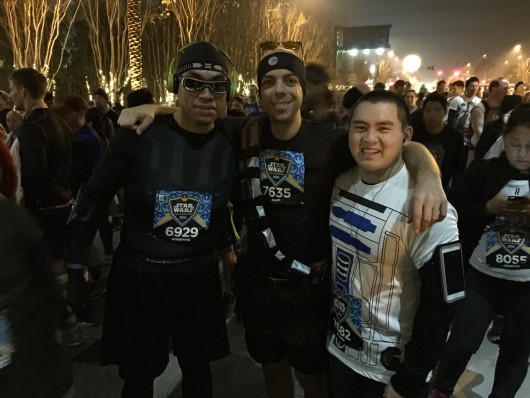 We neglected to sign up for corral placement, so when we lined up for the race, we were really, really far back. Of the 14,000 participants, I’d say that 12,000 of them were in front of us. 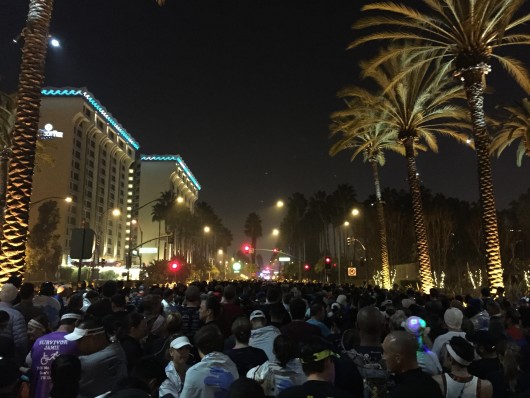 The race started at 5:30am. With all of the people in front of us, it was about 6am when we crossed the starting line.

The first 4.5 miles of the race were inside of the park. This was pretty cool, especially before the sun came up. It was pretty neat to be inside the park while it was still dark out.

Logistically, running through Disneyland was a mess. There were countless bottlenecks, with thousands of runners trying to fit through relatively small spaces. This was very frustrating at times… There were multiple points where I came to a complete standstill during the race!

Running through the park before sunrise was pretty cool, but I was having a hard time enjoying it due to my frustration over the fact that I couldn’t keep the pace that I had trained for. At one point when the crowd of runners came to a dead stop, I realized that the situation was out of my control, and that I needed to relax and enjoy the race rather than worrying about a PR. 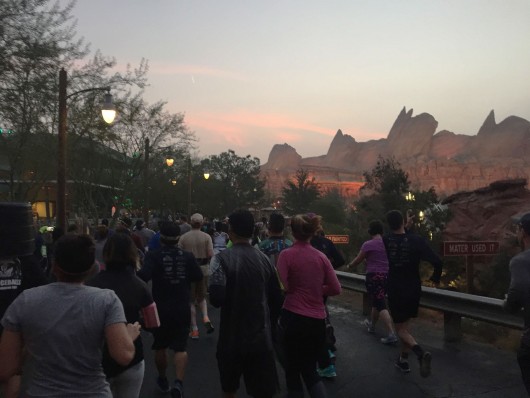 Things improved once I got out of the park and onto the streets of Anaheim. This part of the course was pretty boring, but there was adequate room to pass people and keep a good pace. 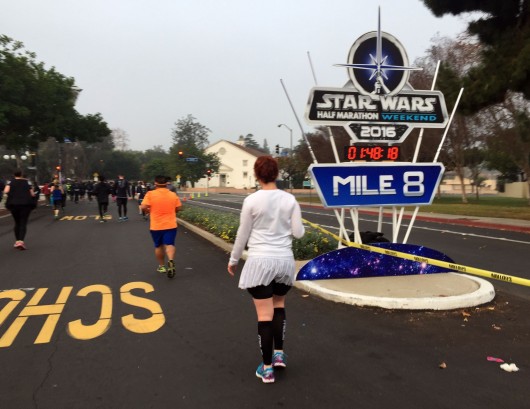 From here on out, I ran at my goal pace. I was feeling great, and I knew that my training had paid off.

I finished in 1:52:46, shaving 2 minutes off of my previous half marathon time.

The finishers area was well organized and had a fun band playing 80s covers, as well as some great photo opportunities, like this Hoth Wampa Cave: 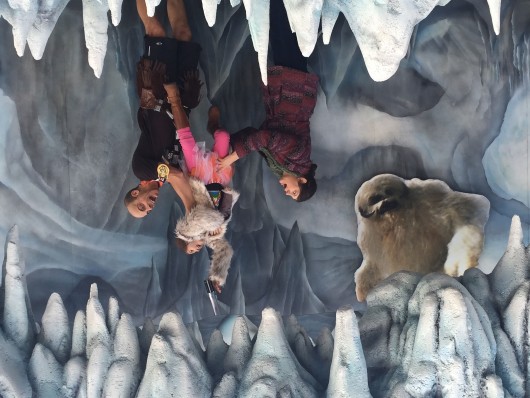 All in all, the Disneyland Star Wars Half Marathon was pretty fun. With 14,000 participants, this was the largest half marathon that I’ve ever done.

The majority of the runners were dressed up in some capacity, and I’d say 30% of them had pretty impressive outfits on. It’s a great event, but I’d recommend that participants run it for fun, enjoying the course and the colorfully-dressed participants, rather than trying to get a PR.

I wasn’t upset with my finish time, but I knew that I could do better. Since I’d spent months training, I decided that I should sign up for another half marathon ASAP.

I found the Griffith Park Half Marathon which was taking place the following Sunday, and I signed up for it the same day.

I wasn’t sore after the Star Wars Half, and didn’t feel the need to take much recovery time. I took Monday off, and then followed the week 12 training routine from Hal’s program on Tuesday, Wednesday and Thursday.

The Griffith Park Half Marathon is a much smaller event. I was told that there’d be less than 500 runners there. There were no corrals to sign up for, and I knew I wouldn’t have any issues with bottlenecks, so I was excited.

I arrived at the park at 6am for a 7am race start time. People didn’t move to the starting line until about 6:50am. 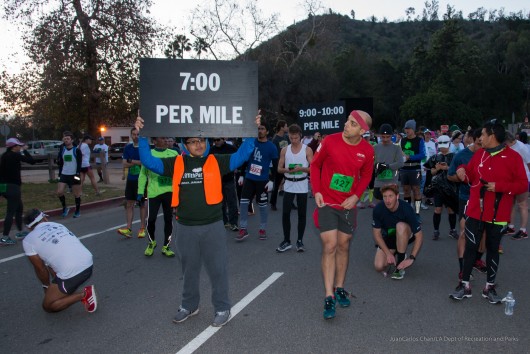 I was one of the first people to line up, and I was standing about 2 feet from the starting line – a first for me. 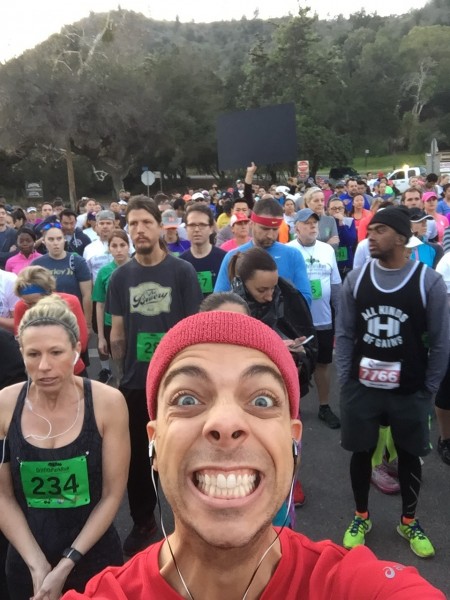 It was a cool feeling to be one of the first people to cross the starting line. There were a few runners who started much faster than me, but I felt like I was in the front of the pack for a while. I had to keep reminding myself slow down and keep my target pace (7:50).

About a mile into the race, I realized that I was in trouble… Griffith Park is full of hills, and I knew this already, but conveniently forgot when I signed up for the race. The hills weren’t too crazy, but I hadn’t trained for them, and they were abundant enough that I struggled to keep a good pace for the first 3 miles.

Aside from the hills, the course was great. Griffith Park is pretty scenic, and we ran by the LA Zoo, the Railroad Museum, etc. The course was not closed off, so there were other runners and bikers around, but that didn’t take away from the experience.

The water stops were plentiful along the course, and due to the low number of participants, it was easy to grab water at each stop without trampling anyone.

I was feeling fantastic, listening to some great tunes, and running with a big smile on my face. Several thumbs up and some high fives were exchanged along the way. 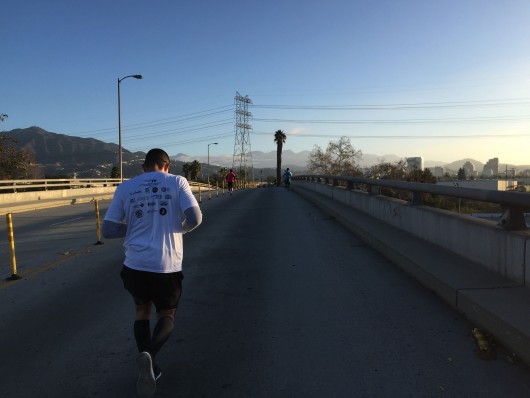 Before I knew it, I had one mile to go. Once the finish line came into sight, I gradually increased my pace until I was sprinting, and it felt great to finish strong.

I finished in 1:46:32, which means I shaved 6:14 off of my Star Wars Half Marathon time. The hills definitely added a minute or two onto my time, but I felt pretty happy with the results overall.

It’s worth noting that this race did not hand out medals to finishers. I don’t care about this, but I know some people do.

It’s also worth nothing that I only saw one or two photographers along the marathon course, and none of them have shared those photos anywhere. Here’s a shot of me after the race taken by a photographer for the LA Department of Recreation and Parks – I contacted him and asked for this photo! 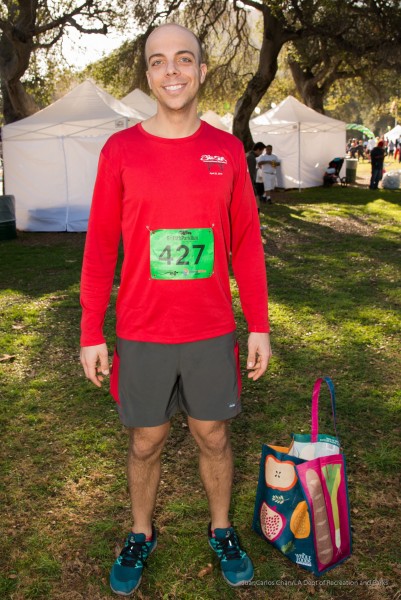 After the race, I spent some time relaxing and stretching out in the finishers area. I was starving, so I decided to head to Grand Central Market for pupusas. After that, I treated myself to a flight of tasty beers from Angel City Brewing Company. 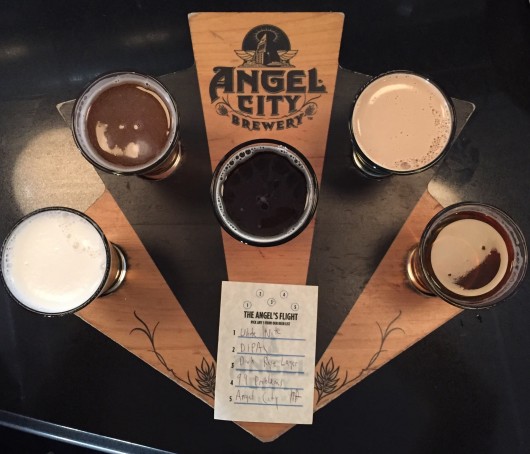 As far as recovery goes, I took 3 days off and started running again on Wednesday. This is primarily because I was busy though. I was a little sore from the half marathon, because I hadn’t done any hill training.

So… Is It Okay To Run 2 Half Marathons In One Week?

There are varying opinions on this topic. Some say you should take more than a week to recover from a half marathon. Others say that 2-3 days is fine. I listen to my body, and it’s never steered me wrong before.

Recovering from a half marathon is obviously much different from the full marathon recovery process, and I would definitely hesitate to run 2 full (26.2 mi) marathons so close to one another. Last year I ran Big Sur and San Diego one month apart, and I felt like I was pushing it a bit… But I would not hesitate to run 2 back-to-back 13.1 mile runs a week apart. I’d do it again! As always, your results may vary.