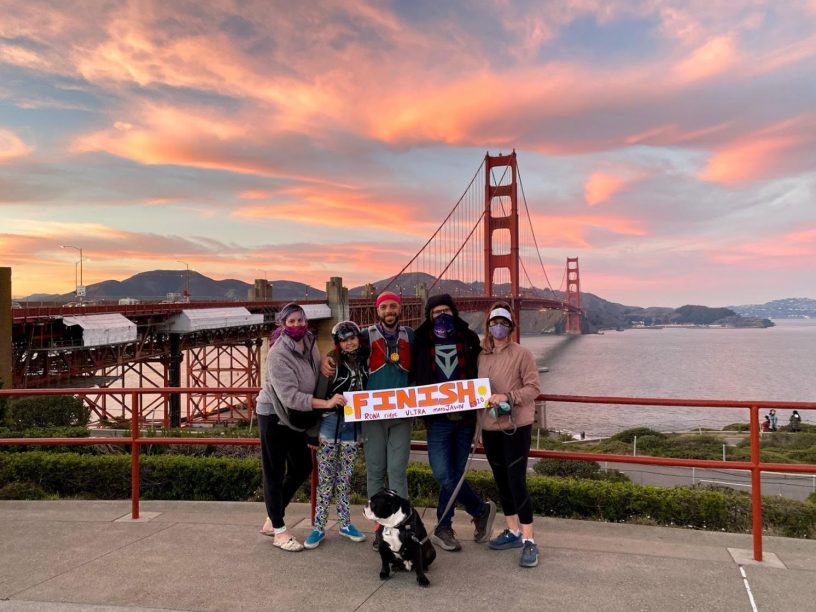 2020 has been chock full of disappointments. It’s likely that I’m not the only one who feels this way.

Most people’s plans for the year were canceled out of necessity, but I was holding out hope that the Death Valley Trail Marathon might still happen in December. Perhaps this was irrational, but the possibility of this race kept me going when times were tough, and I was training accordingly.

I was disappointed, but not surprised when I learned that the event was postponed. This was the second year in a row that the organizers had to push it back.

When the event was canceled in 2019, the silver lining was a last-minute trip to Hawaii to run the Honolulu Marathon. My wife surprised me with those plans while I was heads-down with work. It was a killer backup plan.

This year, travel wasn’t a viable option, and organized races probably aren’t happening anywhere, so I decided to pivot and throw my own race. I was determined to turn these lemons into lemonade 🍋

I did some research and found an awesome local 50k route courtesy of Trailstompers. This 33-mile route begins near Point Reyes Station, cruises down through old-growth redwoods in Muir Woods with jaw-dropping views of Stinson Beach, and finishes after crossing the Golden Gate Bridge into San Francisco.

Running this route would be a no-brainer, right? I wasn’t looking to jump from 26.2 to 50k, but… I quickly forgot about Death Valley once I found this route.

I’d run a 50k once before, but this was pre-Coronavirus, when I was able to feed off of the energy of spectators and the momentum of my fellow runners. This would be a different beast entirely.

Before I knew it, race day was upon us! 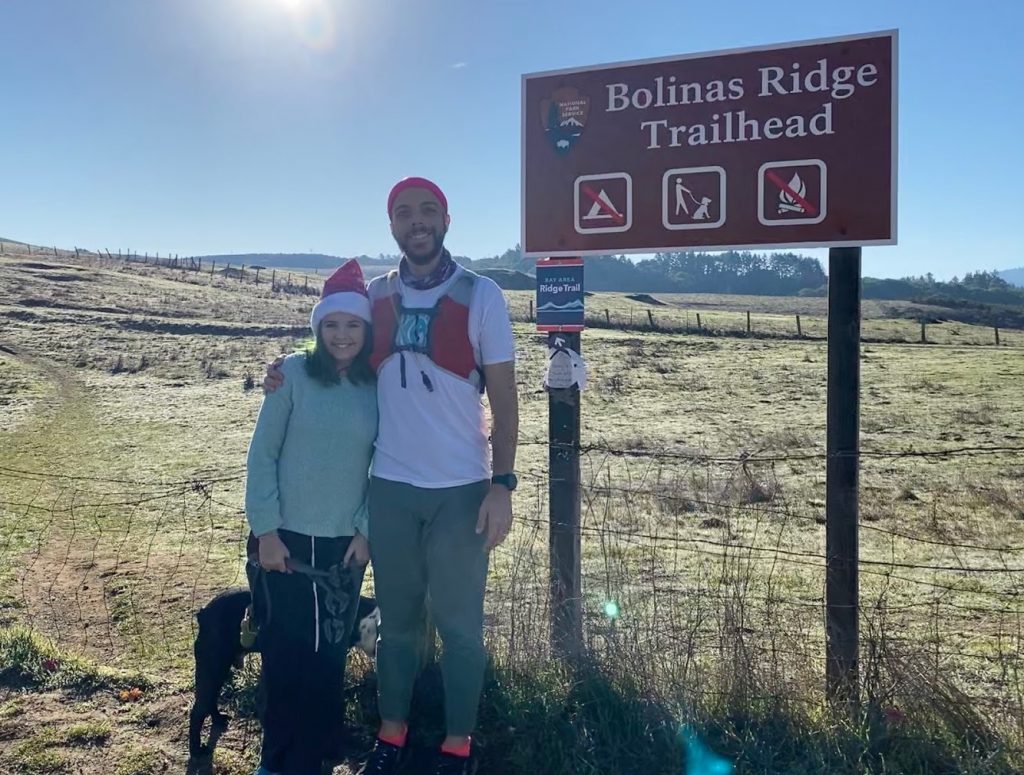 After a beautiful drive through Samuel P Taylor State Park, my wife dropped me at the Bolinas Ridge Trailhead at Point Reyes Station around 9:30am, and I started climbing!

I was happy to get such an early start. I had no goal pace in mind, but I didn’t want to feel rushed or run out of daylight. I was focused on listening to my body and finding a speed sustainable over 30+ miles. I thought that maybe, if I got really lucky, there’d be a decent sunset happening when I crossed over the Golden Gate. 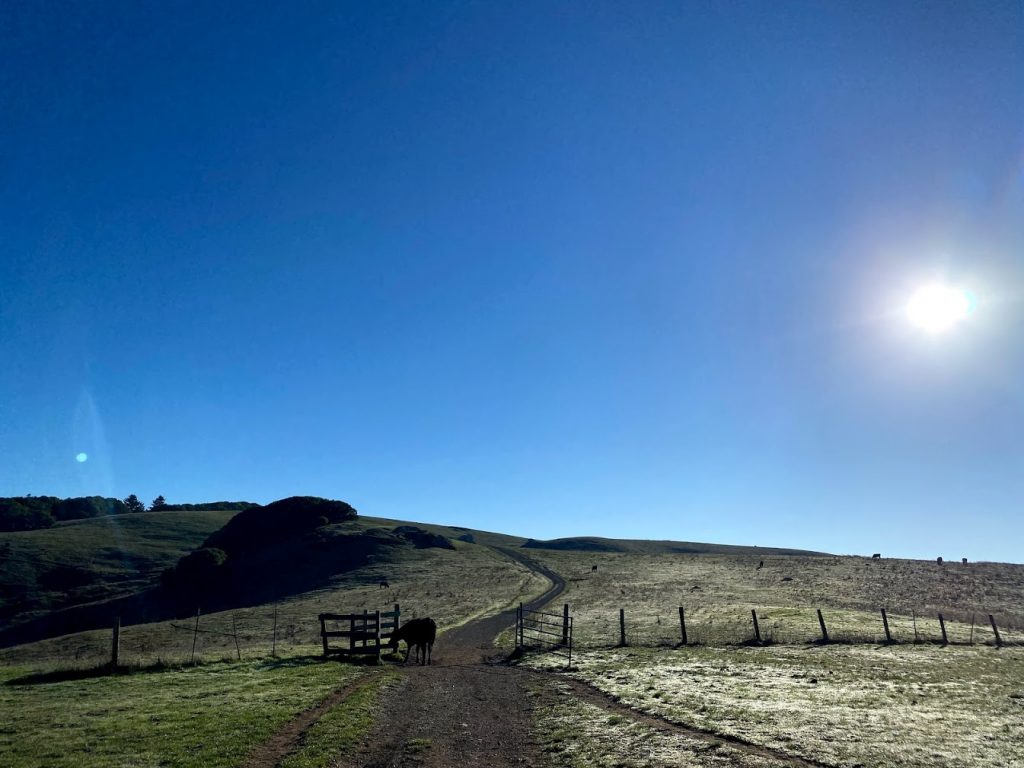 This cow let me pass… but only after I asked nicely

The first few miles were a slow but steady climb along big beautiful rolling hills. A little mud and uneven ground kept me focused on my footing, and I dodged the occasional cow along the way. 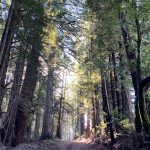 The weather was perfect. The sun was shining, and some rain from a few days prior left the trail soft and bouncy.

About 6 miles into the run I was starting to feel a little hot in the direct sun, when suddenly I was surrounded by trees. I didn’t mind the change of scenery or the shade. I was feeling great!

My wife and daughter had a hell of an aid station waiting for me at the 11 mile mark, right next to the trailhead. 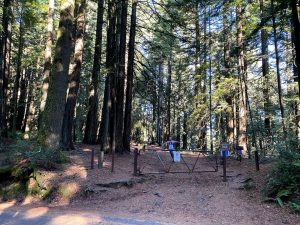 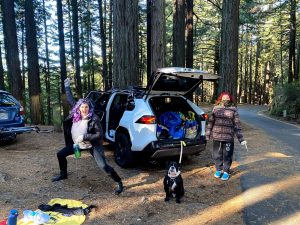 I felt like a race car pulling into a pit stop. They plugged in my phone for a quick charge, refilled my hydration pack with cold water, put gels in my pockets, fed me a bite of banana, poured hot coffee in my mouth, and sent me on my way! It was a shockingly efficient operation, and I continued down the trail with a huge smile on my face.

After a bit more running through the woods, the trail began to weave along coastal hills, and the pacific ocean came into view. 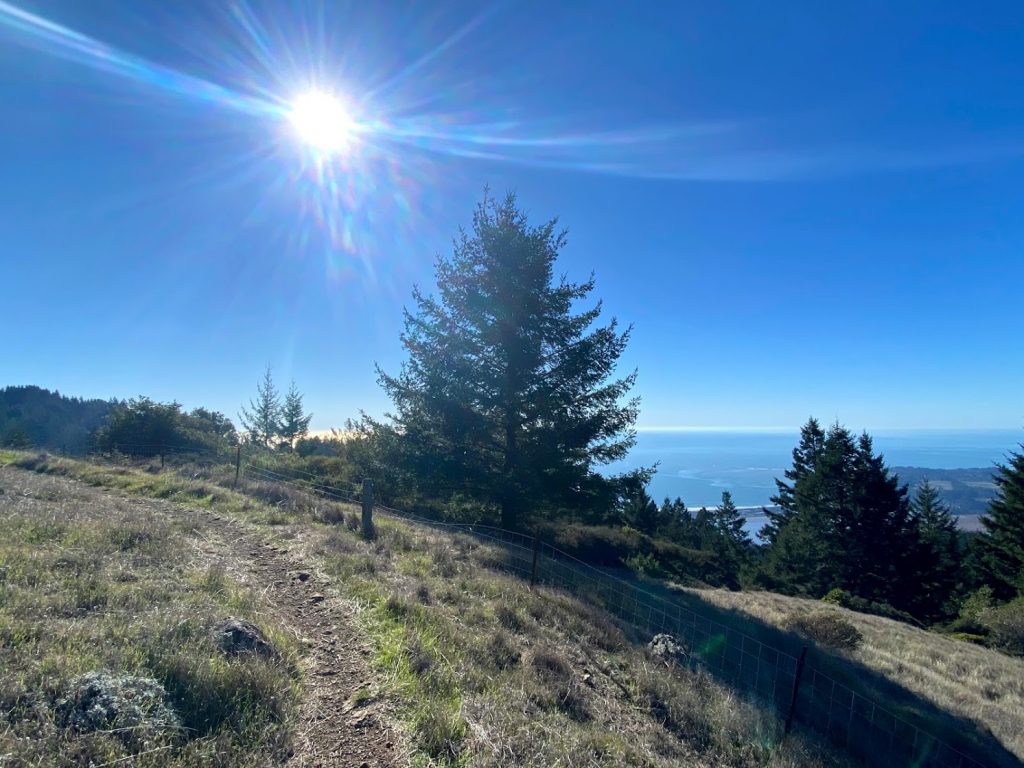 The Pacific Ocean comes into view on the Coastal Trail

It was around this point that inevitable self-questioning began to creep in. I casually knock out 13 mile runs after work with no issues, but doubt works in funny ways.

I’d assure myself that I was doing fine and had nothing to worry about… and then, like clockwork, the scenery would shift to reveal something incredible, and gratitude would quickly take the place of doubt. In this instance, Stinson Beach came into view at the 14 mile mark. 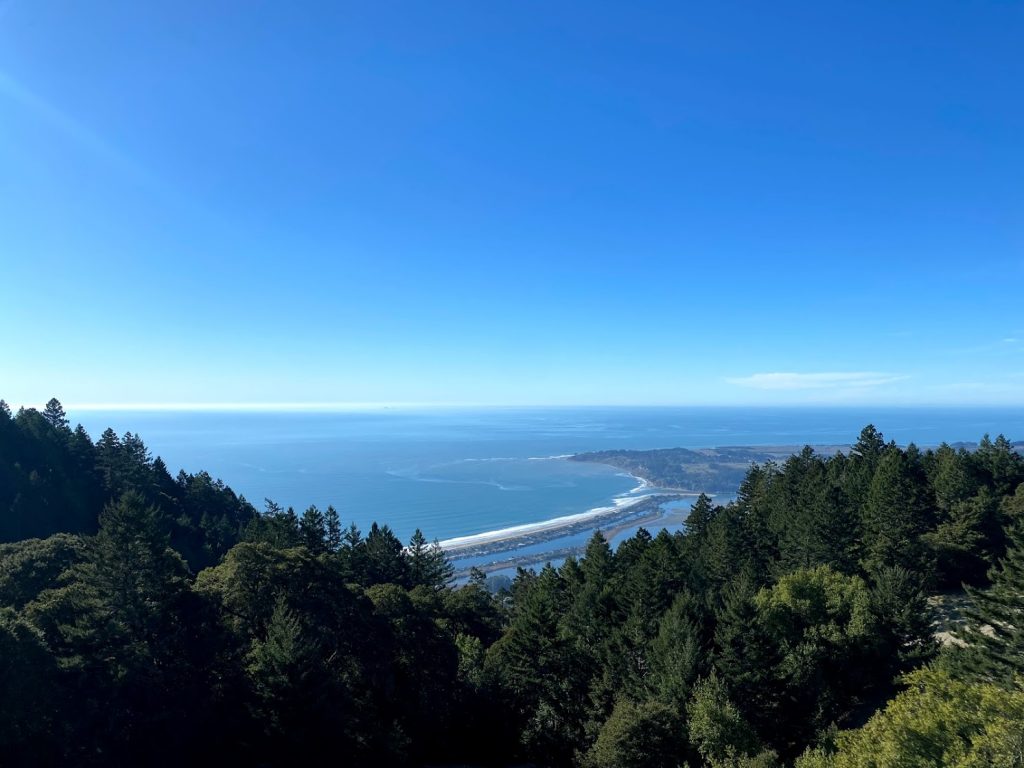 About 16 miles in, I hopped on Matt Davis Trail. This was familiar territory. 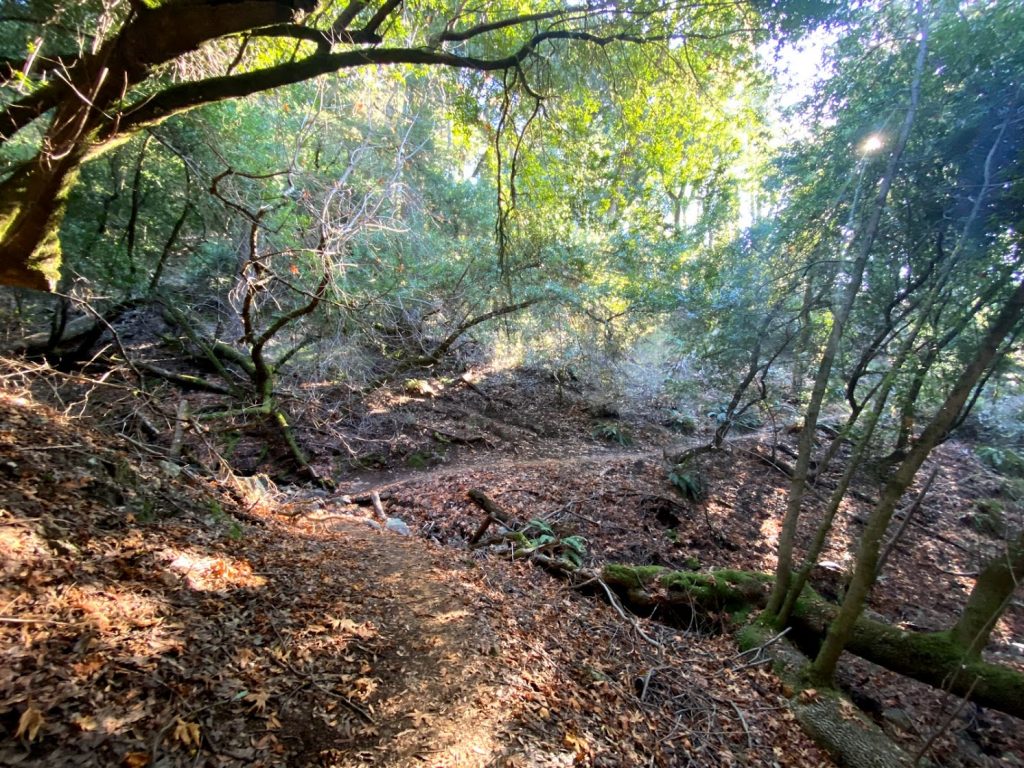 The sun peeks through the trees along Matt Davis Trail.

I’d taken a few “mental health” days earlier in the year where I’d sneak away to Steep Ravine to camp for a night and run the trails around Mt Tamalpais. Matt Davis Trail was always a highlight on those runs, and suddenly finding myself in familiar terrain kept my spirits high.

I was uncertain whether Pantoll Ranger Station would have potable water available, but they did. This was a nice surprise, as I was running low on water, but my next aid station was only a few miles ahead at the intersection of Highway 1. 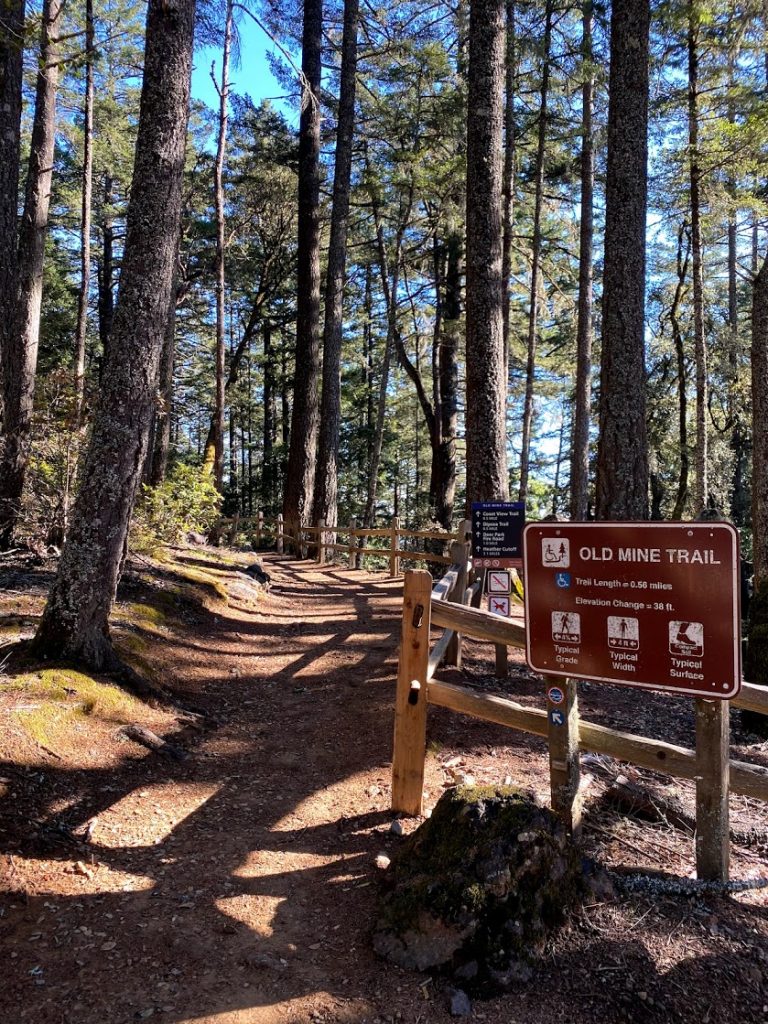 Old Mine Trail soon led me to the Dipsea Trail. I stopped for just a moment to take in the view of the Pacific before a steep descent into Muir Woods. 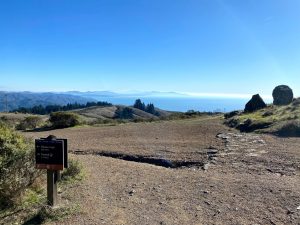 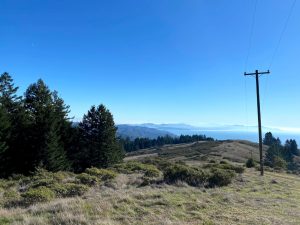 The next 2 miles were 1000 ft of descent. 18 miles into my run, my knees were starting to wonder what was happening. As counterintuitive as it sounds, I found myself wishing I were climbing rather than descending.

Every step came with a little “ouch”. Luckily another change of scenery was just around the corner. 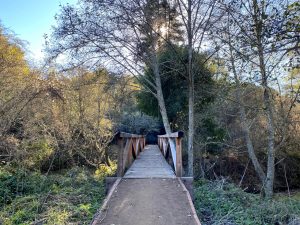 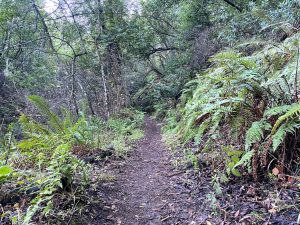 I crossed a cool little bridge, hopped on Miwok Trail, and all of a sudden I was in a cool lush jungle setting with soft, bouncy mud.

I knew my next aid station wasn’t far off, but I had to climb about 800 feet to get there. I wasn’t stoked about it, but I made it happen.

My second aid station was right next to Highway One. They rotated my tires, changed my oil, gave me some words of affirmation, and sent me on my way. 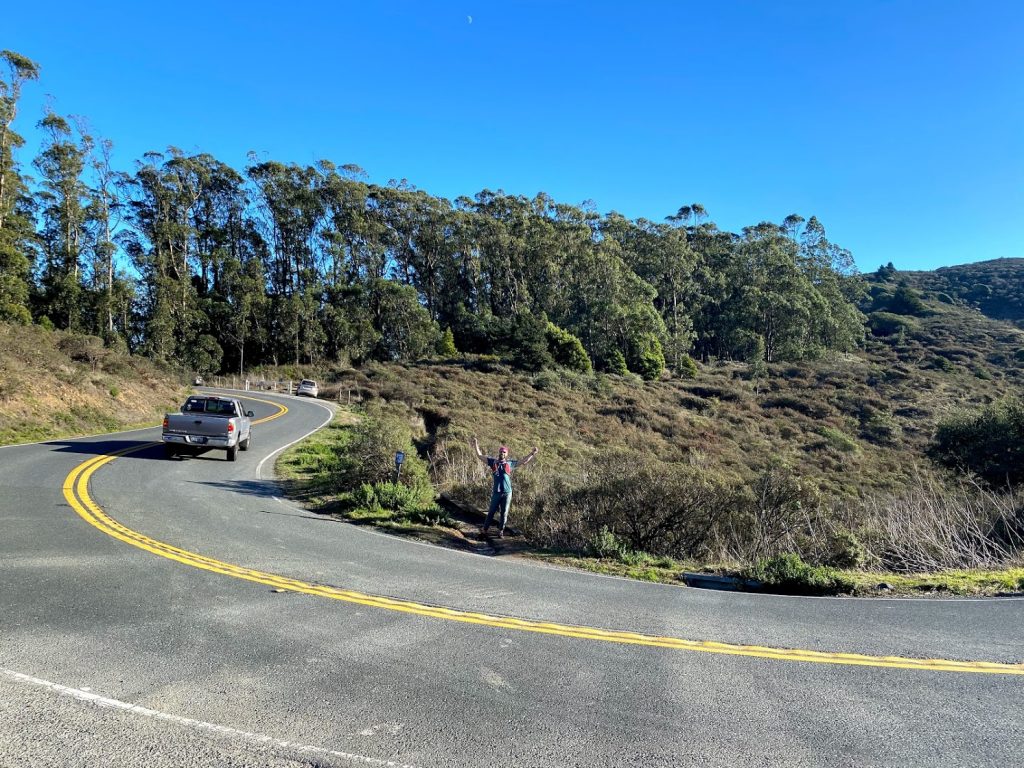 I was cruising for the next few miles. The mild-but-slowly-increasing pain started to become a dominant thought. I decided I needed some high-energy tunes, so I queued up some Death Grips on Spotify.

As I was looking at my phone, I noticed something in my peripheral vision. I looked up and a bobcat was about 15 feet away from me on the trail! 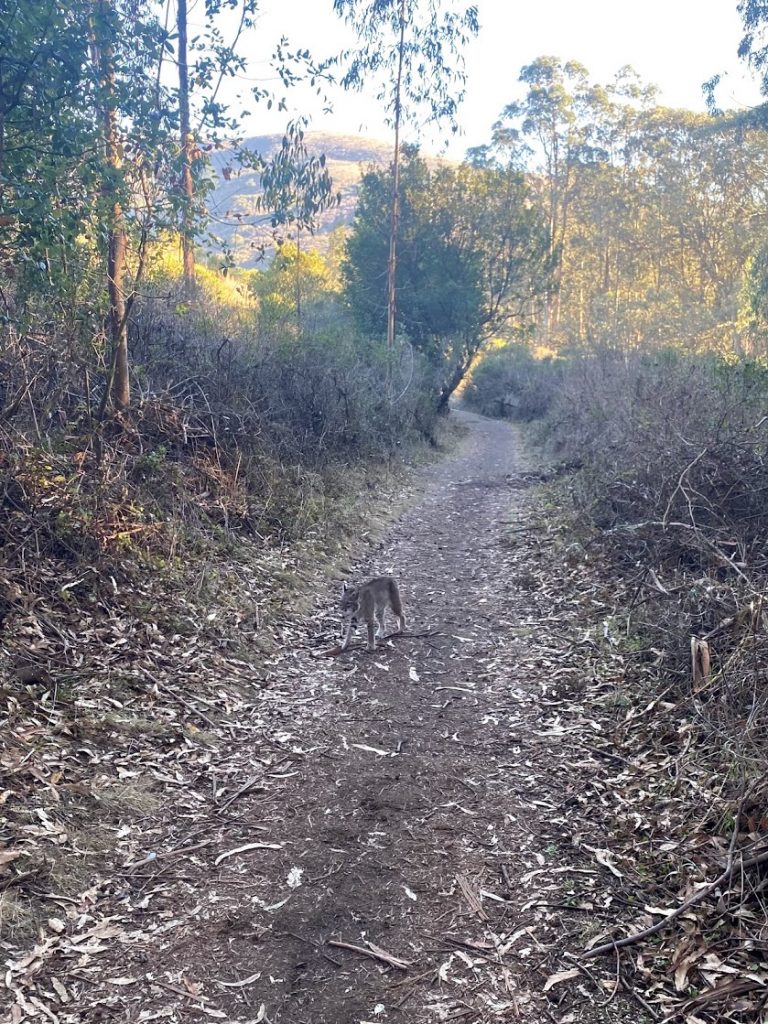 A bobcat on Miwok Trail

This was my second bobcat sighting in December (here’s video of the first) so I had recently read about how to handle the situation. I kept my cool, waved my arms around, and yelled like a weirdo. He growled at me a bit (although it was more of a grumble) and trotted off into the woods.

I passed several folks with off-leash dogs just down the trail, and I let them know about my new friend. I know that my dog (who was on his leash waiting for me at the finish line) would have chased after the Bobcat, and it probably wouldn’t have ended well.

2 miles down the trail, where Miwok Trail meets Bobcat Trail, the San Francisco skyline popped into view. I can’t explain how comforting this was. My race would finish on the other side of that bridge, and now that I could see it, I knew that I had this thing in the bag. This gave me a serious energy boost. 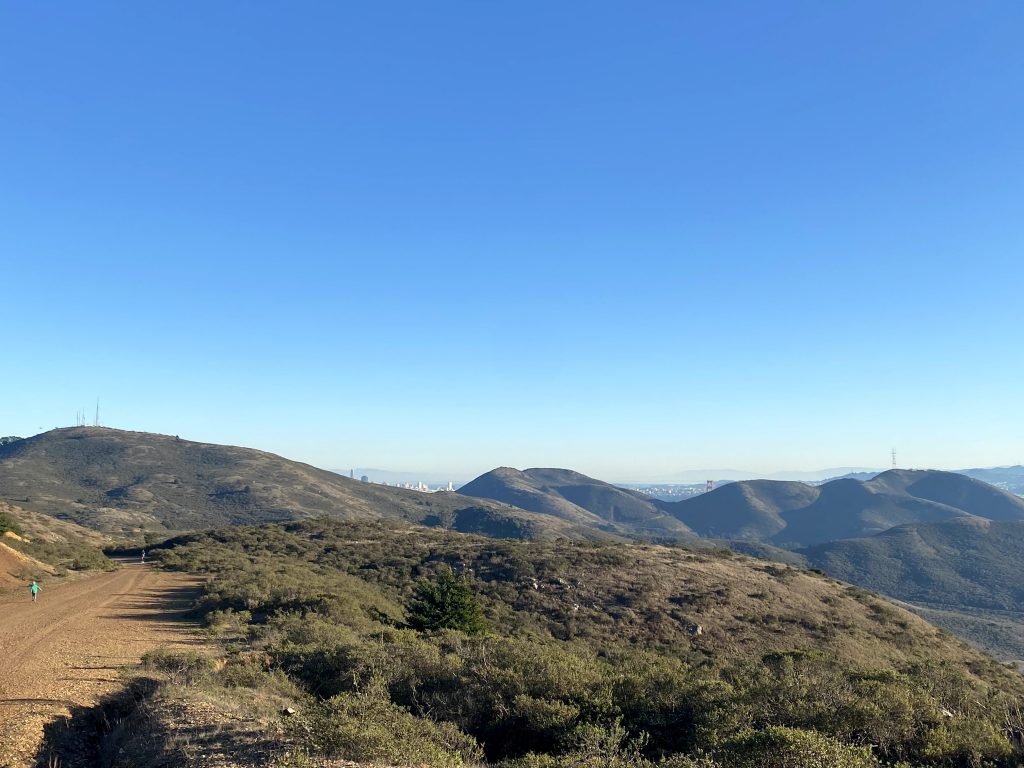 At 28 miles, I got on Morning Sun Trail, and suddenly I knew exactly where I was.

Before Coronavirus shut everything down, I used to get up before dawn and do sunrise runs before I went to the office in San Francisco. This portion of the trail was always a part of my Marin Headlands sunrise loop. The sudden sense of familiarity gave me an incredible boost of confidence and focus, and I felt so happy. 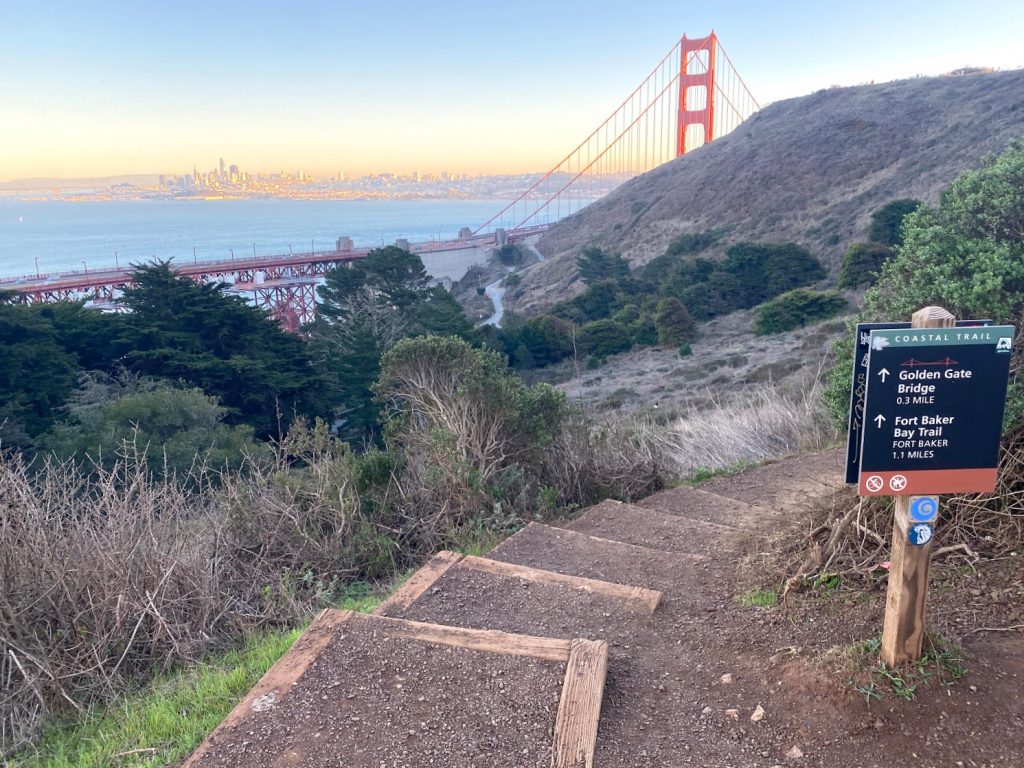 Just a few steps away from the Golden Gate Bridge!

Before I knew it, I was running down the steps towards the North Golden Gate parking lot that I’ve come to know so well. I knew my cheer squad was waiting for me down there.

My daughter was waiting with her rollerblades on. She skated across the bridge with me, and our friend Ruthie ran across with us as well. The sunset started right when we hit the bridge! The timing was perfect. 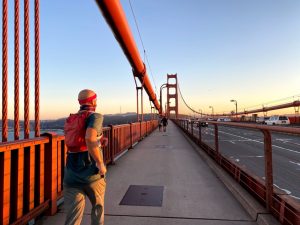 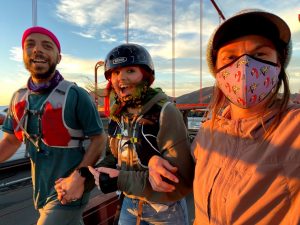 I honestly can’t think of a cooler way to finish an event like this. Any pain I was feeling previously was gone from my mind, and I felt like I could have run another 10 miles.

My wife and friend Nick were waiting on the other side of the bridge with a “finish line” for me to run under. They even made me a race medal! Bridge tourists were watching and laughing; it was quite a spectacle. We were all treated to the best sunset I’ve seen in a long time. 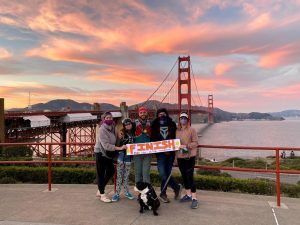 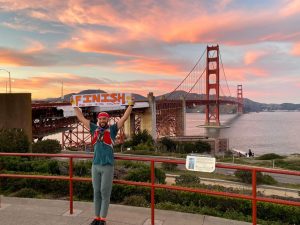 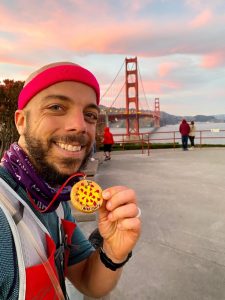 While sitting on the ground stretching, with my supportive family and friends standing around me, I felt an incredible sense of gratitude for these people and my physical ability to pursue such an undertaking.

I can’t overstate the beauty of this route; it must be some of the most stunning and varied terrain in the country and it’s right in my backyard.

This day felt like the culmination of my running career, especially as I’ve gotten more into trail running over the past few years. I’ve run an ultramarathon previously, but never by myself in the woods, which felt like another achievement unlocked.

The run itself was, without question, the most physically demanding I’ve ever done. Countless hours on trails in 2020 have helped me to overcome the mental games that come with distance running, and I’ve made strides at avoiding negative self-talk. I believe the mental portion is half the battle, and it really helped me out on this run.

I ran my very first marathon back in 2013 with my mother-in-law, who had already run several marathons and encouraged me to join her. She lives in Australia, so running a race together wasn’t an option this year. However, we had the unique opportunity to sign up for a virtual marathon together instead. This route allowed me to “run with her” once again in the Honolulu Virtual Marathon. Another silver lining!

All in all, this was an epic running experience. 2020 has been all about finding that silver lining, and this race was one hell of a consolation prize.