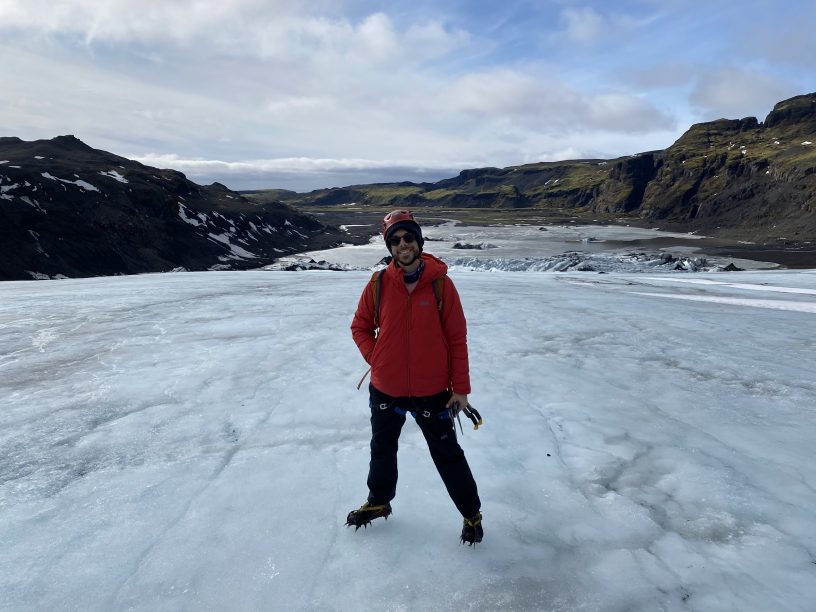 Chillin' out all cool on Sólheimajökull glacier

Like many of my peers, I coped with the pandemic by leaning into work. I’ve worked longer and harder these past ~2 years than I ever imagined I would, for better or for worse. That hard work has paid off, and I’m happy with the direction of my career, but I was burning myself out, and I knew that a real break was necessary.

So I booked a solo trip to Iceland.

This was my first real vacation since before the pandemic, and it was also my first time vacationing alone for any substantial amount of time.

After landing in REK and picking up my rental car, I headed southeast along the coast. I took the drive nice and slow and pulled over about 200 times because the landscapes were blowing my mind. 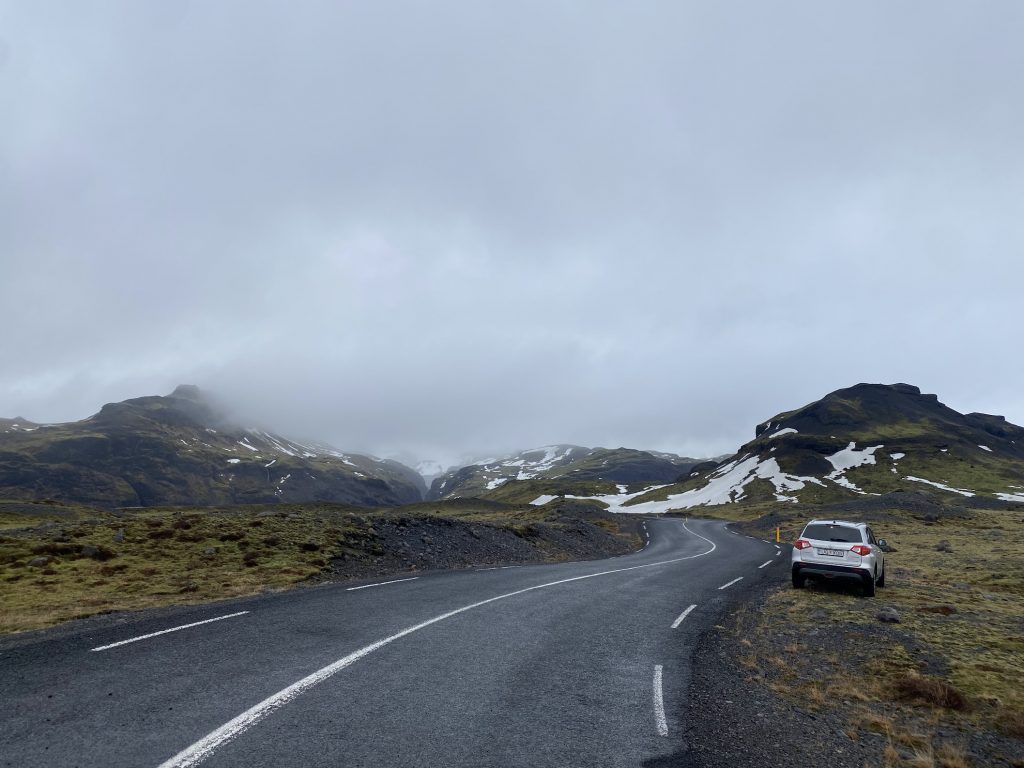 I spent my first 2 nights on a small farm about 20 minutes west of Vik.

These little huts were on the property. Unfortunately, I did not sleep in them. I believe they were occupied by trolls.

I spent my days exploring the area between the farm and Vik, blissed out on black sand beaches and beneath stunning waterfalls and running on any trails that I could find. 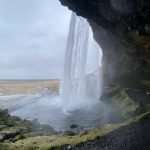 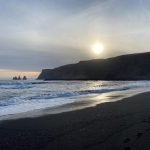 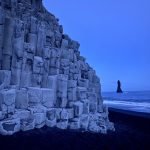 The trail that starts above the Skógafoss waterfall was particularly awe-inspiring, and I understand that it goes much further than the section I ran. I’d love to come back and run the entire thing, as it’s a popular hiking route. 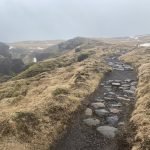 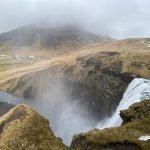 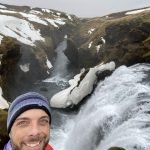 I hired a guide to take me ice climbing on Sólheimajökull glacier, which was one of the highlights of my trip. 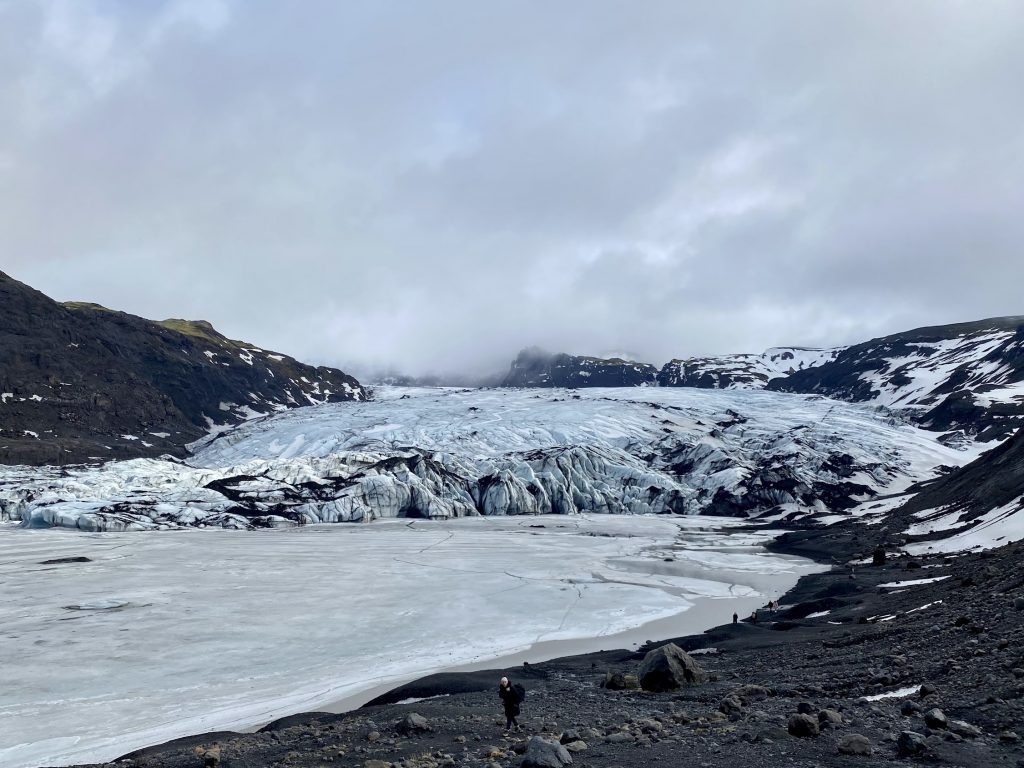 Walking on a glacier (with spikes) was an amazing experience in and of itself. Ice climbing was also a lot of fun, and I’d love to do it again sometime on larger walls, as we barely scratched the surface. 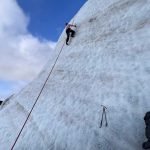 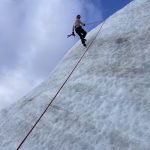 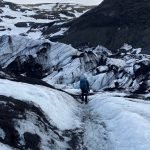 My tour guide, Saga, was very knowledgeable about the glacier and Iceland in general. She runs her own tour company, Viking Women Tours.

The south coast of Iceland is beautiful, and I definitely could have spent more time there, but I had plans to see some live music (Umphrey’s McGee) in Reykjavik that weekend, so I headed back towards Reykjavík.

The concerts were to be held at Harpa, a concert hall right on the water in downtown Reykjavík. This is one of the most beautiful indoor venues I’ve ever visited. I don’t think they typically host rock bands, but mostly symphonies and theater productions.

I planned to spend my first day in the Reykjavík area at Blue Lagoon, but the weather was relentless, so I only stayed in the thermal pools for about 20 minutes… And those 20 minutes were intense. The hot water felt nice, but the cold wind and rain were flying so fast that it almost hurt.

On my second day, I left the city to tour the Golden Circle. I did some hiking in Þingvellir National Park. 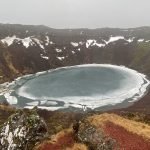 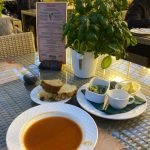 I skipped most of the recommended stops on the Golden Circle due to heavy rain and intense wind, but I did see a geyser, a crater, and had an epic comfort meal (delicious tomato soup and beautiful bread) at the Fridheimar Tomato Farm.

On my third day in Reykjavík, a trail running guide picked me up at my hotel for a private running tour.

I found myself regretting this decision for a split second when my alarm went off early after a late night of music, but ultimately it was a great experience. I had never done anything like this before, nor was I aware that guided runs were even a type of tourist activity, but I’m glad I did it.

We ran 14 miles through ice, snow and mud in Búrfell, climbed up over a mountain, and went on a little spelunking adventure near the end of the run. I would have never found these trails on my own!

The concerts themselves were awesome, and I ended up running into some folks that I knew at these shows, which was nice. Umphrey’s McGee never fails to deliver a blistering, headbanging dance party. That said, I’ve never attempted to write at length about live music, and I don’t intend to start today, so we’ll leave it at that.

I spent the final portion of my trip exploring the Snafellsness Peninsula. I stayed at a nice hotel in Stykkishólmur, a picturesque little fishing town on the north of the peninsula.

I can’t think of the right words to adequately describe this place, but it felt like a dream. There are adorable colorful houses scattered along the small hills overlooking the harbor. It’s a small sleepy town, while also somehow being the biggest town on the peninsula.

I spent a full day driving around the length of the peninsula, stopping often to hike or run on anything that looked interesting. I didn’t have any real plan, yet this ended up being my favorite day of the trip.

My first stop was at the base of Mount Kirkjufell. I climbed about halfway up before it got sketchy and I decided it was best to turn around. 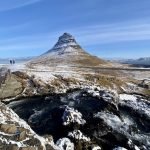 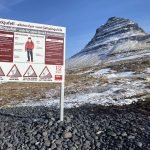 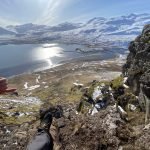 I think my favorite stop of the day was at the black church in Búðir.

There were a few tourists taking photos when I pulled up. I noticed a trail next to the church, so in the interest of maximizing my daylight hours, I decided to go for another run.

This trail took me past a crater and through an alien landscape of rock formations, earth fissures, and giant holes in the ground that were surely inhabited by elves.

I ended up running about 5 miles down the trail before I realized that I was running out of daylight and it’d be best to head back. No one was at the church at dusk.

Búðakirkja, the black church in Buðir

I’ve never spent a day like this before, running and hiking in multiple locations with driving in between. I did 6 separate runs and hikes all around the peninsula. For the activities that I recorded, I covered about 17 miles on foot. I felt like I could have kept going too, but I ran out of daylight. It was a long, indulgent, and extremely fulfilling way to spend a day. 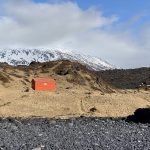 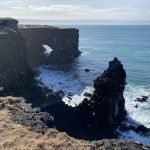 I enjoyed all of the time that I spent behind the wheel in Iceland. Perhaps it’s the novelty of new landscapes, but I was perfectly content driving for hours, never wishing that I could just arrive at my destination. Aside from the Reykjavik area, there weren’t many other cars on the road in Iceland, and there were some days when I barely saw anyone else out and about. 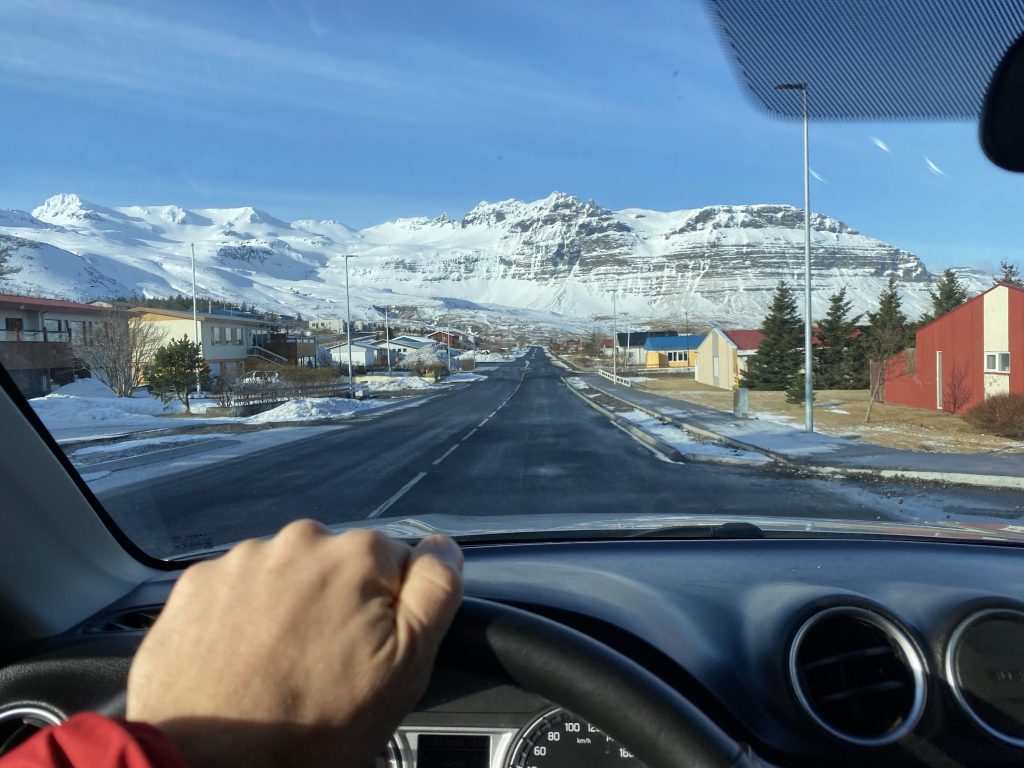 On this trip, I found that traveling alone created lots of room for thoughts and feelings, particularly without the distraction of alcohol to “fill a void”.

I decided to lean into that. When I sensed challenging emotions arising, like loneliness or anxiousness, I avoided the instinct to distract myself, and I sat with those feelings instead. I acknowledged them (“okay, now I’m feeling sad, what’s this about?”) and tried to understand where it was coming from. I didn’t always find an answer, but it felt like a good exercise regardless.

There’s an interesting closure that comes from allowing a feeling (like loneliness) to wash over you instead of reaching for your phone. I found that I come out the other end of that feeling with some enthusiasm for whatever is next. I suppose I’m used to playing whack-a-mole with bad feelings, so this is a new concept for me, and my attempt to characterize it is likely a bit half-baked.

(Never ever saw the) Northern Lights 🎶

This is a travel blog about Iceland in winter, so it’d be odd to not mention the Northern Lights.

Seeing the aurora borealis in person has always been on my bucket list, and I brought my camera and tripod with me. I had a Jeep photography tour scheduled, but it was canceled due to the weather forecast that evening. I went out on my own after the concert another night, when the conditions looked promising, but I didn’t have any luck.

Other things that stood out to me about Iceland:

Hot off the press!

I challenged myself to write this entire post on my flight home. I’m prioritizing publish speed over a smooth and thoughtful narrative. Striving for the latter often dooms my posts to sit in the “Drafts” folder for eternity. So that’s it. Thanks for reading!