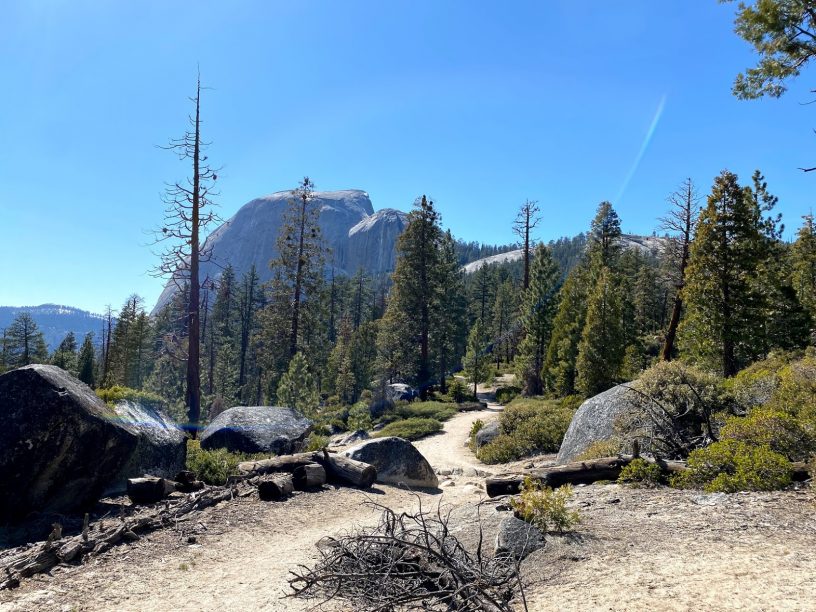 I’ve been doing a lot of reading about fastpacking lately. I don’t have all of the gear needed for a fastpacking trip just yet, but I decided to do a longer trail run with some elevation (and gear) to see how it felt to run a longer distance with everything I might need for ~24 hours on my back.

I was able to grab a last-minute campsite in Yosemite National Park this past weekend, and I mapped out a 28 mile loop that’d start and finish near my campsite in the valley.

My route would take me on the Mist Trail up to Nevada Falls, on to the John Muir Trail out to Merced Lake, and then back to the Valley on a different trail. I couldn’t find a name for this trail on US Topo maps, but it runs along the Merced River, from Merced Lake through Lost Valley back to Nevada Falls.

I talked to a ranger about my route. She didn’t have any recent trail condition reports but told me that most of the snow at that elevation would probably be melted. 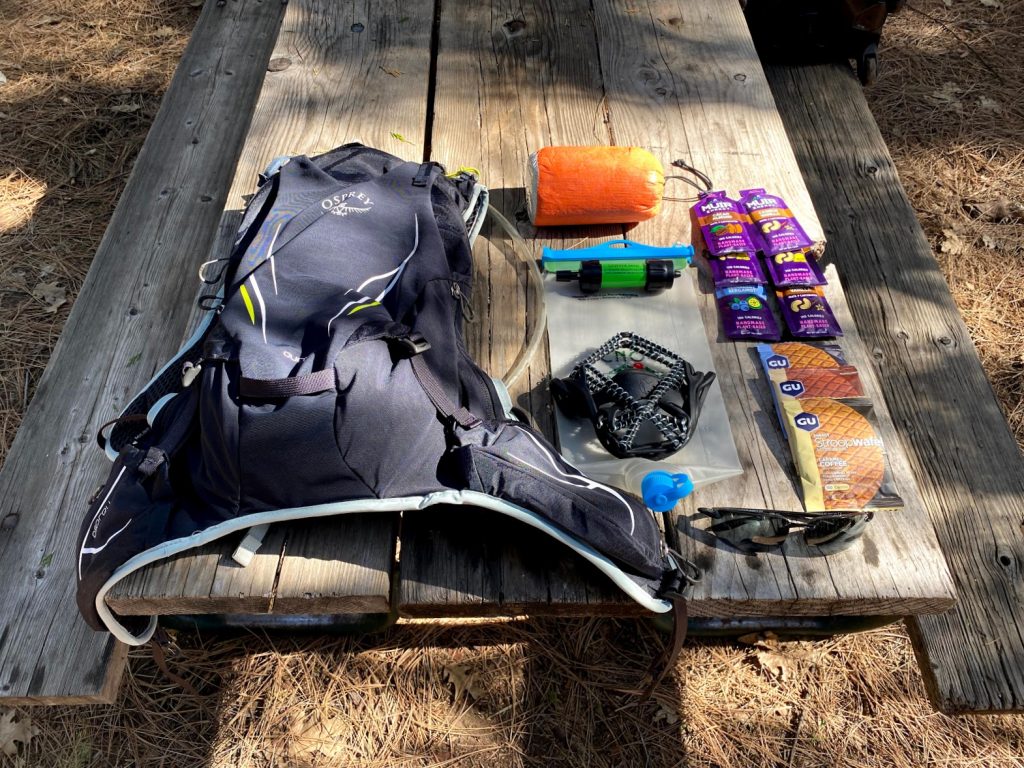 My pack for a long trail adventure, including nutrition, water filter, snow cleats and emergency bivy

I took stock of all of my gear/nutrition and was feeling pretty good about the adventure ahead of me. I ate a bagel and a banana for breakfast and hit the trail around 10:30am.

As expected, I passed quite a few folks on the climb up Mist Trail towards Vernal Fall. 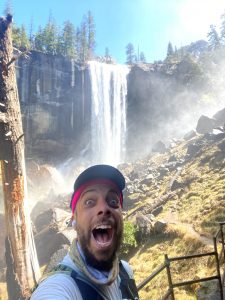 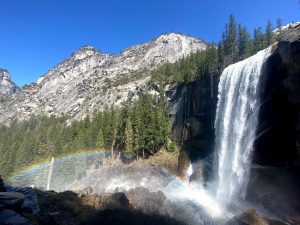 As soon as the Mist Trail took me to the John Muir junction, I took my headphones out for the remainder of the run so that I could be keenly aware of my surroundings. I had already seen a black bear hanging out in a meadow on my way into the park. I know that bears are always a possibility in the sierras, but I was about to venture off on my own in unfamiliar territory, so I was on high alert.

From that point on, I wouldn’t see another human until I returned to the JMT junction. 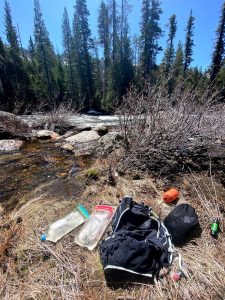 I made my first water stop along the Merced River at noon. The water was crystal clear and looked so appealing.

I filled up both my primary 2.5L water bladder (which feeds into the hydration system) and my secondary 2L water container that I use for my filtration system. I was fairly confident that I’d have access to water for the majority of this route, but I wanted to be safe, since the river bank hadn’t been very approachable prior to this point. I also figured a little extra weight would help me get a feel for fastpacking.

The weather was absolutely perfect. The air smelled great. I was really enjoying everything about my experience so far. 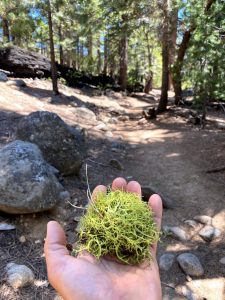 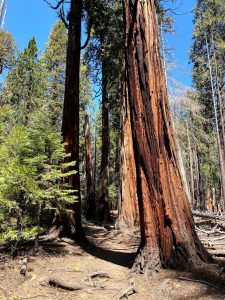 I ran past a sign that said Half Dome was 2 miles away. I had never been this close before. 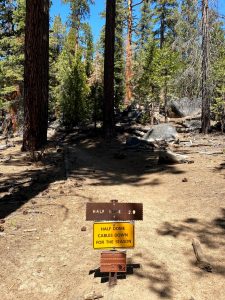 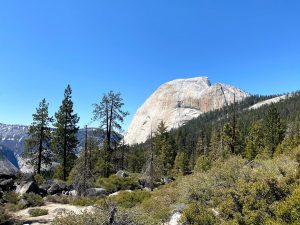 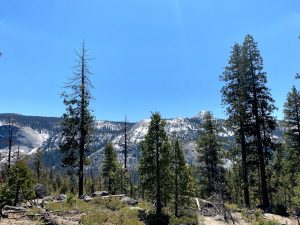 I have a permit to climb Half Dome in the fall, so it was exciting to know that I’d be returning in a few short months.

I was feeling fairly dehydrated, despite drinking a ton of water. I felt like I was constantly drinking water on this run. 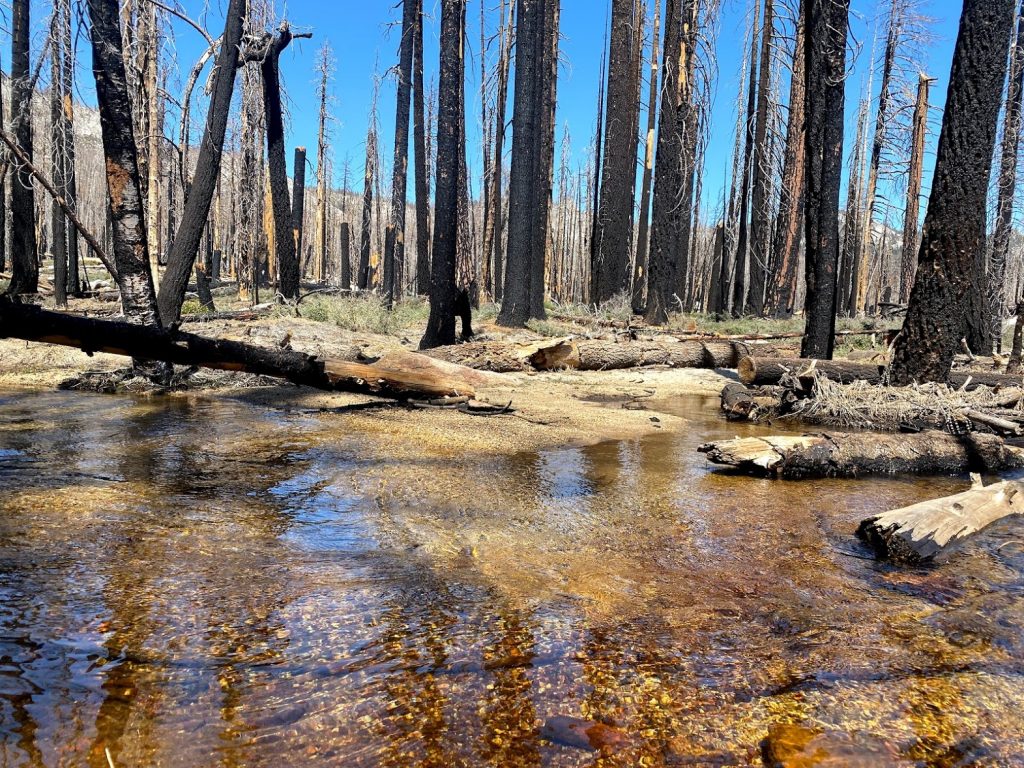 I made my second water stop around 2pm. Look at that crystal clear water!

From this point on, things started to get challenging. This portion of the John Muir Trail had some fire damage, and at times it was difficult to stay on the trail. I strayed from the trail off into a big open field a few times and was happy to have AllTrails to guide me back in the right direction.

I was singing out loud to myself, mainly to give any wildlife a “heads up” that I was barreling down the trail. On more than one occasion, a wild turkey would take flight from out of the brush, and the sound scared the daylights out of me. I couldn’t believe how loud they were. The first time this happened I almost had a heart attack! 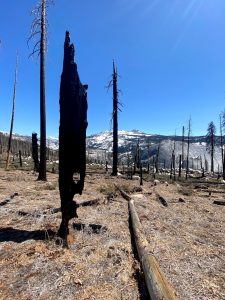 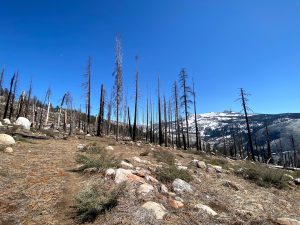 For a while, the trail was covered in thorny brush, and I had no choice but to power through it. My ankles are in rough shape today as I’m typing this. I didn’t bother to take any photos of this section as I was feeling pretty frustrated at the time. I was also feeling grateful for my Janji track pants, and couldn’t believe they didn’t rip through this section. This isn’t a sponsored post or a referral link, I’m just genuinely in love with the product.

After making it through the overgrown thorny section, I decided to make another water stop and take stock of my situation.

It was 2:30pm, and I was about 11 miles deep, with 3 miles to go until I reached Merced Lake. I was feeling a bit more fatigued than I normally would from this type of distance. I knew that the elevation was to blame for that.

The trail was now a lot more exposed, with lots of rocks and beautiful views. 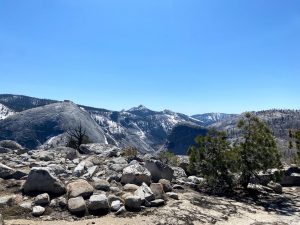 As I sat down next to a stream to filter some water, I noticed a giant, fresh bear print in the mud next to me. I stood up and realized that there were bear tracks all around me. I knew I was in bear territory, but this had me feeling particularly vulnerable.

At that moment, it hit me that I hadn’t done sufficient research to feel confident in the remainder of my planned loop. It’s a small detail, but I didn’t like the fact that I didn’t know the name of the trail I’d be returning on, not to mention the conditions of that trail. It was just a small red line on my AllTrails app. I wouldn’t be a happy camper if I ran into a bunch of snow or something and had to turn around 18 miles into my loop.

I was making decent time, but I didn’t feel great about the uncertainty ahead of me. At this hour of the day, I decided that the known (the trail behind me) was a better option than the unknown. I swallowed my pride and said out loud “alright, I’m turning around” to no one in particular. I hadn’t seen a soul in hours, so perhaps I wanted to keep myself company. Maybe a nearby family of bears heard me.

I wasn’t particularly excited to run through the thorny overgrown portion of the JMT again, but I was feeling pretty good about my decision to backtrack and get back to the comfort of the Yosemite Valley well before dark.

The views were even more stunning coming back towards Half Dome. 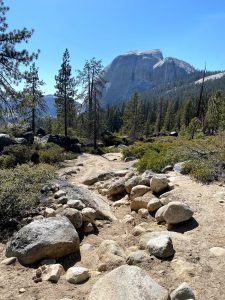 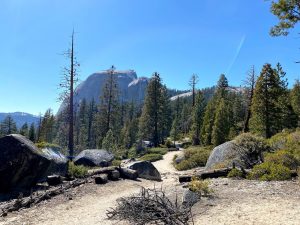 As the Valley came into view, I realized I only had a few miles left, and I didn’t want the experience to end. I made a few stops to soak in the incredible views. 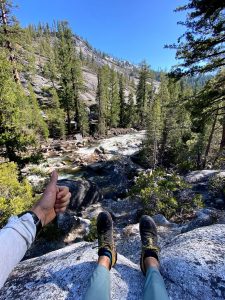 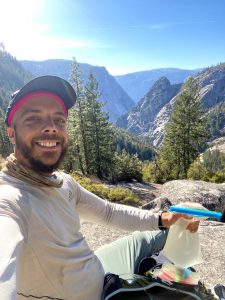 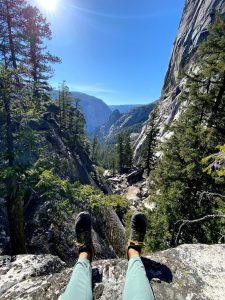 The descent back down the John Muir Trail into the valley is truly breathtaking. Yosemite is one of the most popular National Parks for a reason… it’s just ridiculously beautiful. I captured a short video of this portion of my run because the views were blowing me away. 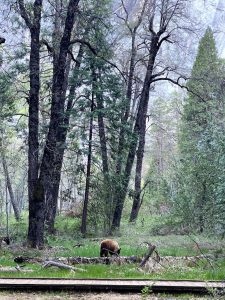 Back in the valley, I was about a half mile from my campsite when someone flagged me down and told me there was a bear with cubs on the trail ahead. I turned around and started on a different path back to the campground, and ran right past another bear.

I spent the majority of my run on high alert for bears in the backcountry, and the only bears I encounter are just minutes from my tent in the busy valley. Go figure.

I’ve done my share of long trail runs before, and they’re almost always solo, but this one felt different. Yosemite is a huge park and I felt more “alone” than ever before.

I’m proud of myself for swallowing my pride and turning around when I wasn’t feeling confident. This was a hell of an adventure and I’m excited to keep pushing my limits as a trail runner. I’ve come a long way, but I still have so much to learn.

From now on, I’ll spend more time familiarizing myself with my routes and coming up with a structured plan before hitting the trail in less familiar terrain.