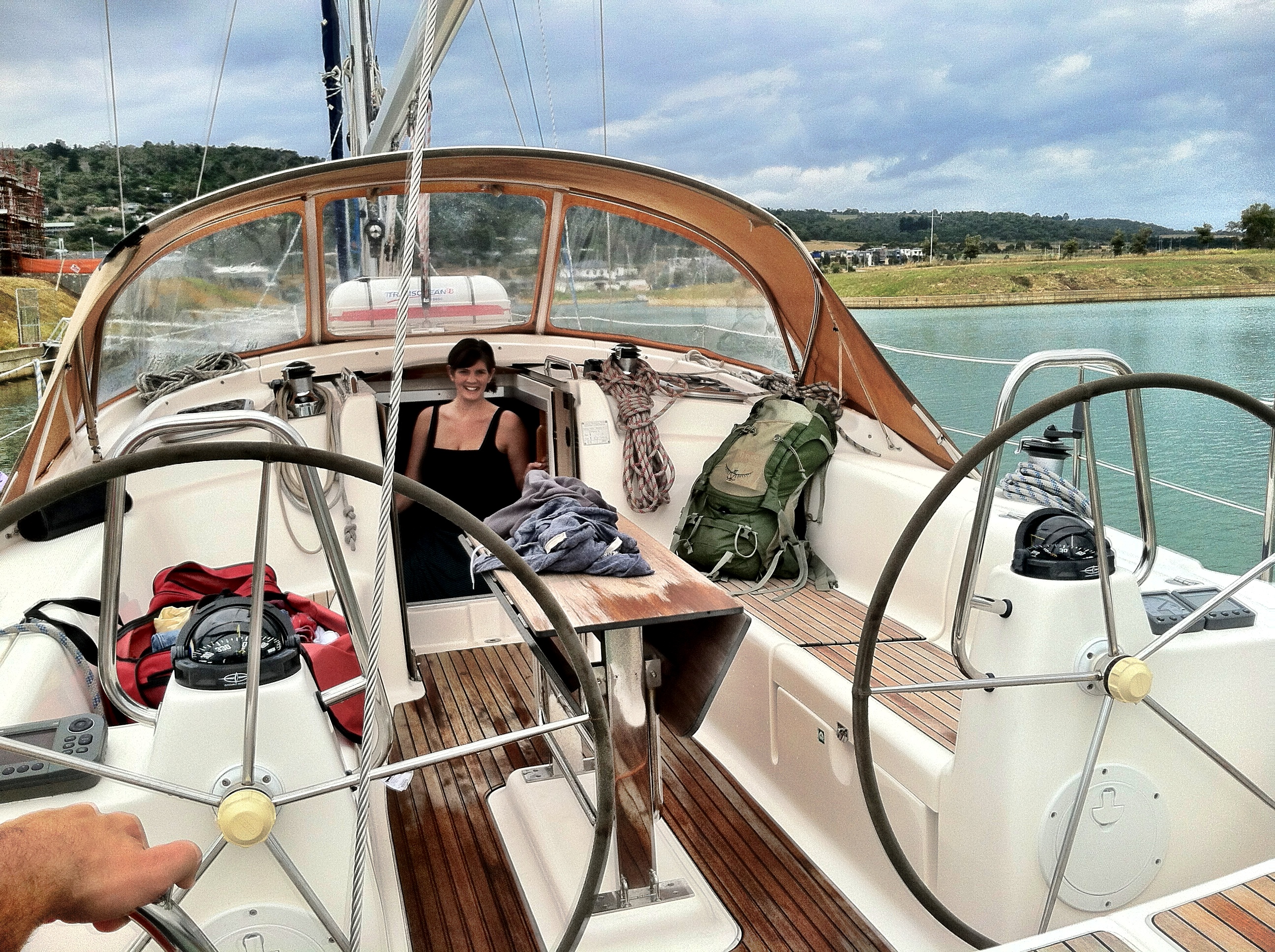 This year I had the chance to spend the Holidays and New Years in Australia. My girlfriends Mom moved there after marrying an Australian. They live about an hour south of Melbourne in a Marina called Martha’s Cove. We spent roughly 2 weeks over the holidays/New Years staying with them. This was my first time in Australia (or in the Southern Hemisphere, for that matter) and I had a pretty awesome time.

I took a bunch of pictures while I was there. As I’ve been growing increasingly frustrated with Facebook and its accompanying swarm of advertisements, I figured I’d just post some of my photos here instead. A good deal of these shots were taken with an iPhone 4, and therefore are not of the highest quality, but they’ll suffice.

There were quite a few of us visiting on this trip – myself, my girlfriend and her daughter Makena, as well as Lauren’s sister Ashley, her two sons and boyfriend. 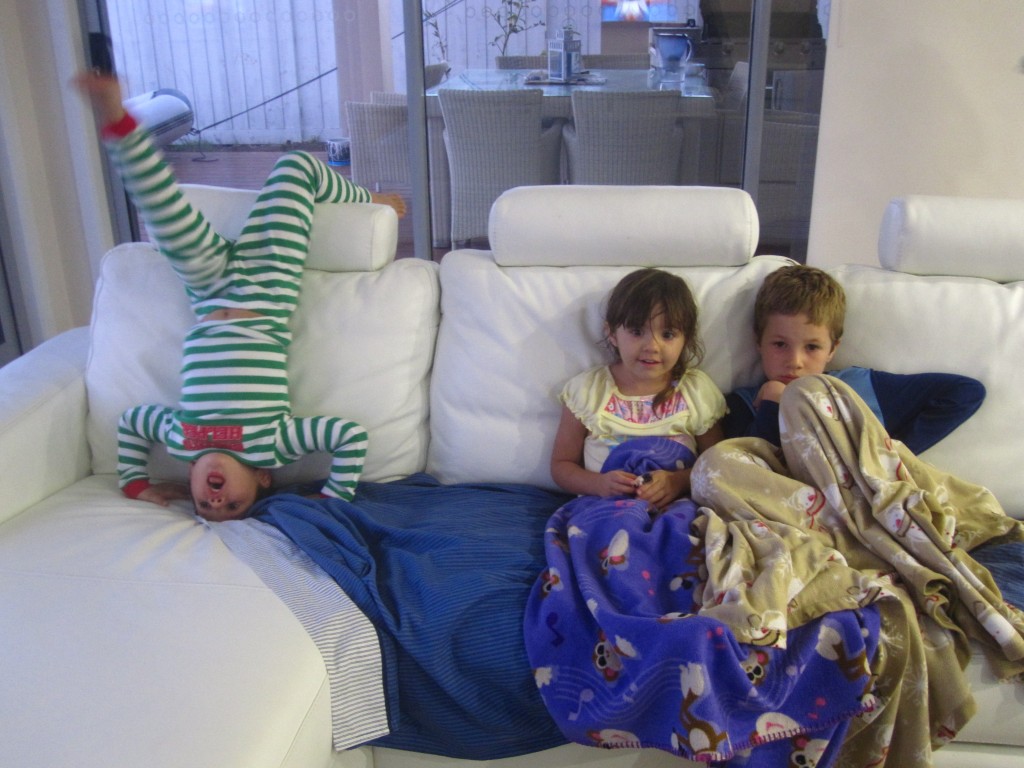 Due to the number of us visiting and not enough rooms in the house , Lauren and I got to stay on a boat that is docked behind the house. Lauren’s stepfather Chris has sailed most of his life, and they had recently bought the land on the marina and built their house so that they could be close to the boat. Chris had just purchased this boat (a Bavaria sailboat, I think) in Sydney and sailed it down the coast. He arrived with the boat  the day after our flight got in. 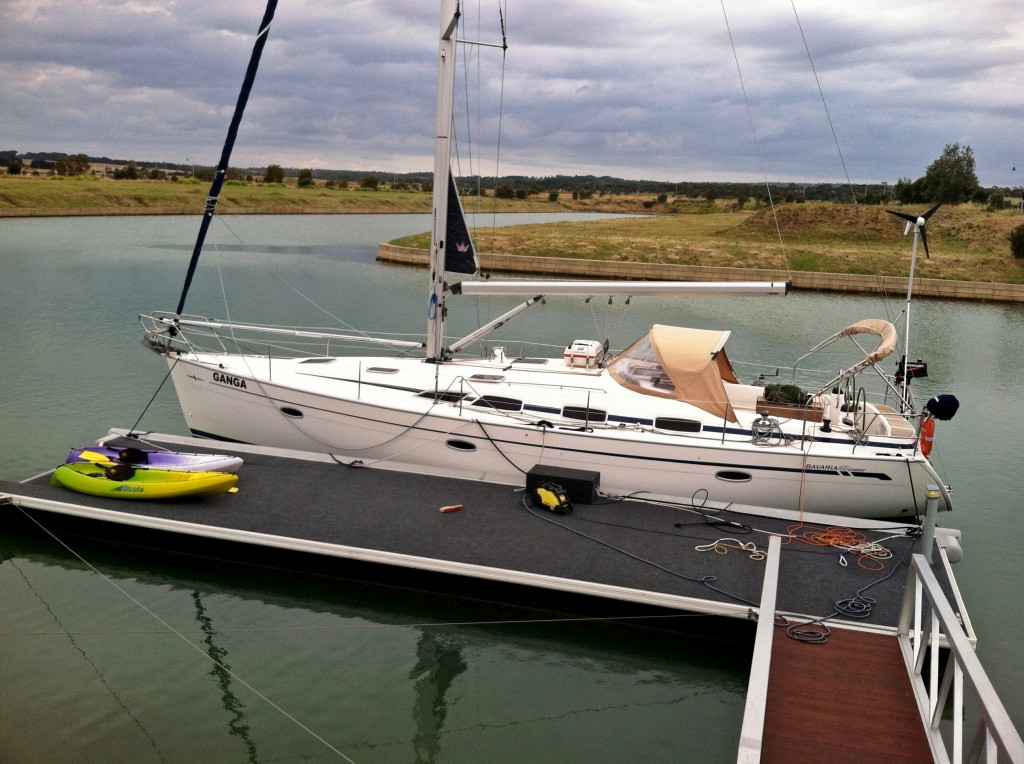 Where we stayed while in Victoria, Australia 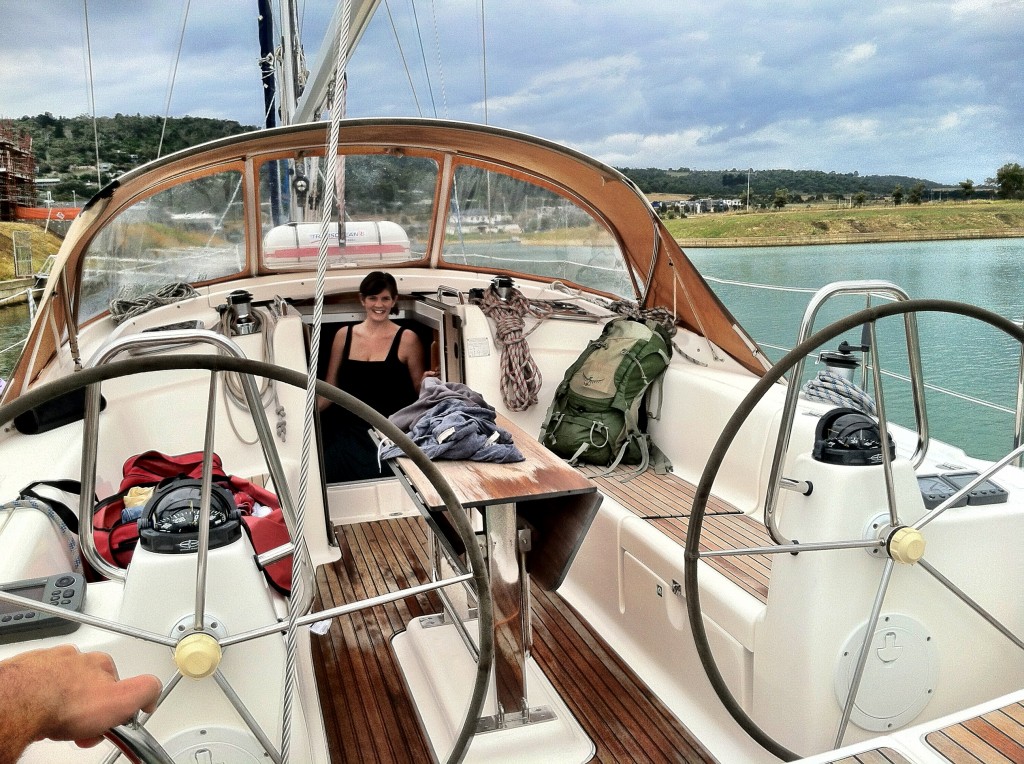 Since the boat was literally in the backyard, it served as an extension of the house for us, and it was actually pretty awesome.

We didn’t keep the boat docked the whole time we were there though. We took an overnight sailing trip to Queenscliff, which was one of the highlights of the trip for me. 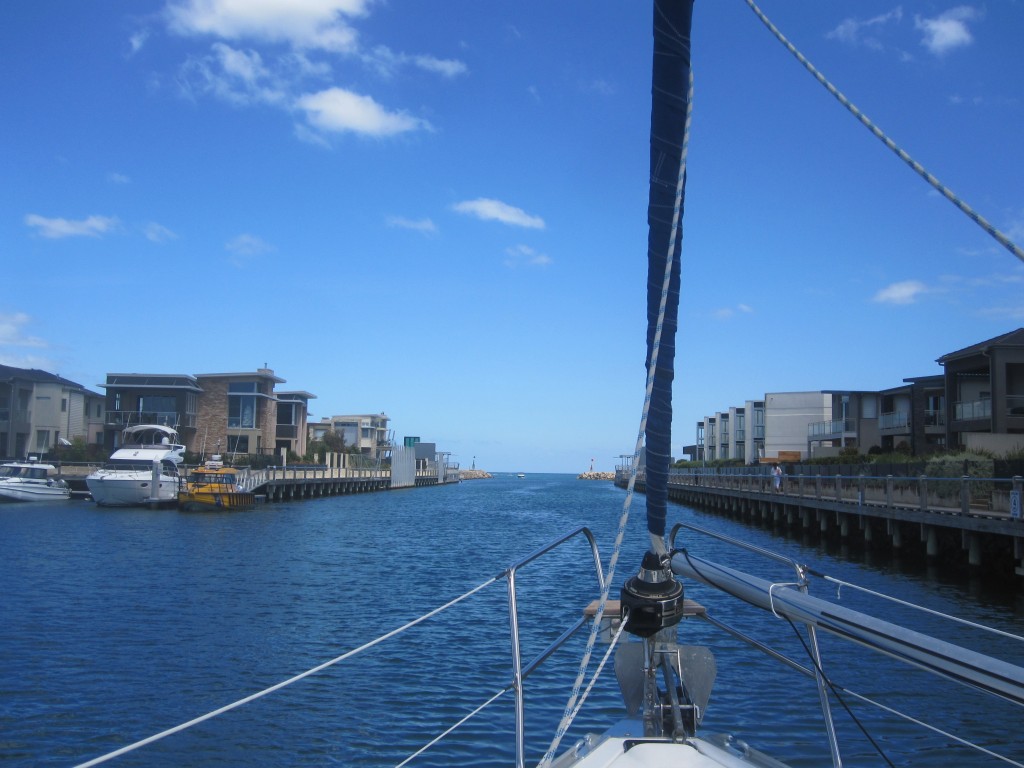 It took us about 3 hours to get to Queenscliff, and it was a pretty tranquil and relaxing ride. We spent the day checking out cool little shops in the area, spent some time on Queenscliff Beach, etc. 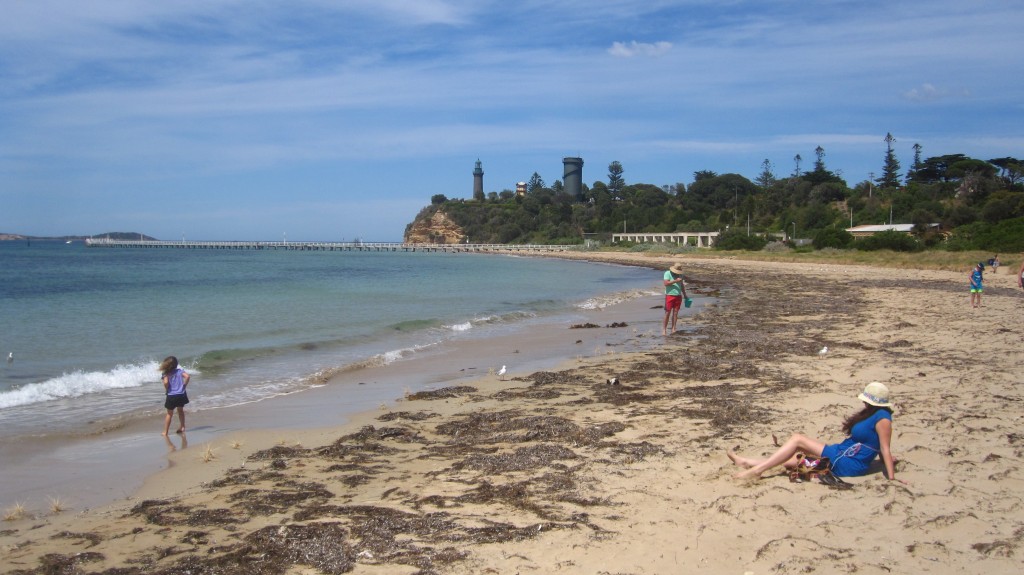 As I said, the ride to Queenscliff was very relaxing. The ride back to Mount Martha the following day was a different story. We headed into some gale force winds, and before we knew it, the boat was getting rocked all over the place.

Chris (Lauren’s stepfather) knew that things were gonna get rocky, so he had us put everything that wasn’t attached to the boat below deck. Sure enough, things got pretty intense for an hour or so as we headed into the winds which were over 30 knots.

We had to send the kids below deck to the cabins so that they didn’t fall overboard. Chris has been sailing since he was a kid, so he knew how to respond and keep the boat under control, but I’ve never been in a situation like that before, and at the time it seemed very likely that the boat was going to capsize – it was pretty much sideways, and the mast seemed like it was going in the water at times.

While he was steering the boat, he needed help with certain things, like pulling/releasing the rigging ropes (to change the direction of the sails). In a chaotic situation where a boat is violently rocking back and forth and someone is quickly asking you to do things you’ve never done before, it can get pretty crazy. The kids were below deck crying, Lauren’s step-sister Deborah was getting sick off the back of the boat, items were flying off of shelves in the galley… It was very intense for a good hour.

Anyway, we obviously made it out in one piece, but it was one of the wilder situations I’ve been in for quite some time. In retrospect it was an awesome experience, but I’d be lying if I said it wasn’t a little scary. I don’t have any pictures of the chaos because I was holding on to the boat for dear life!

In addition to sailing, we also got some kayaking in. The Marina that Lauren’s parents live on lets out to the Melbourne Bay and from their house, it was about a 10 minute kayak ride to the ocean/beach, which was really cool. 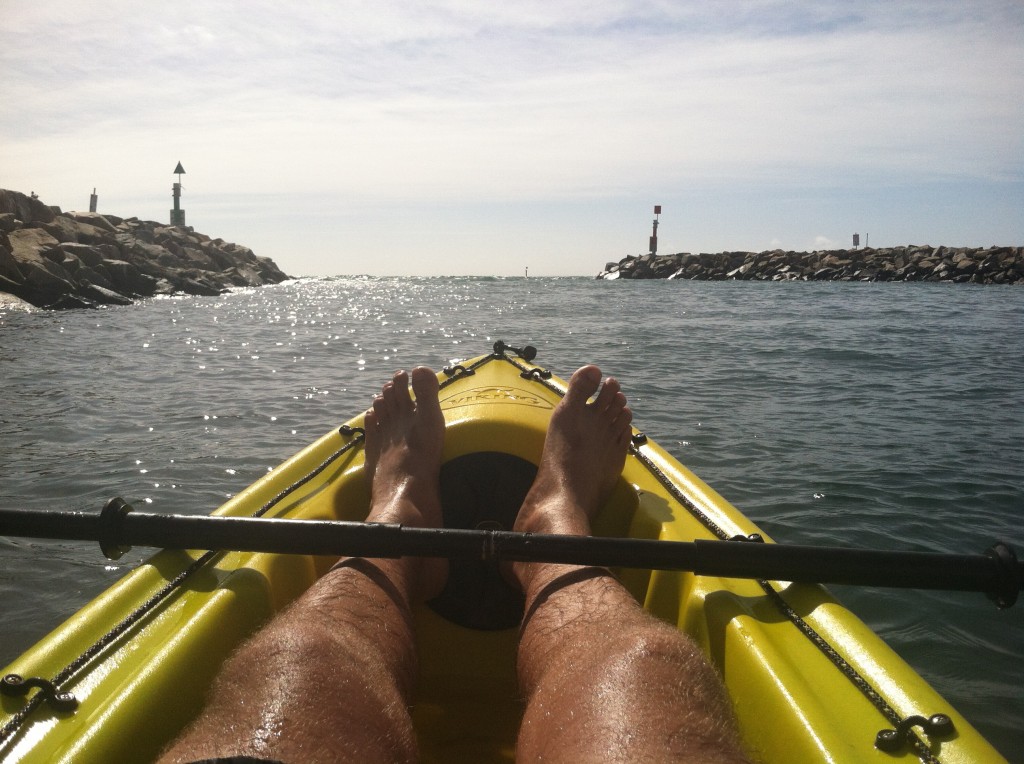 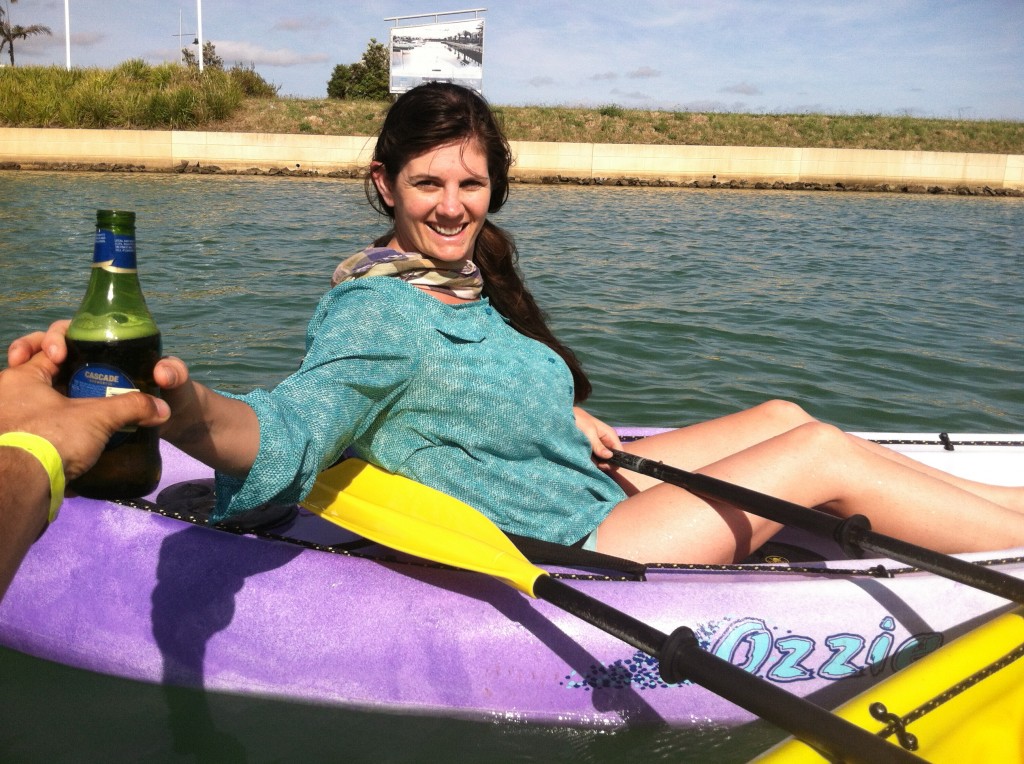 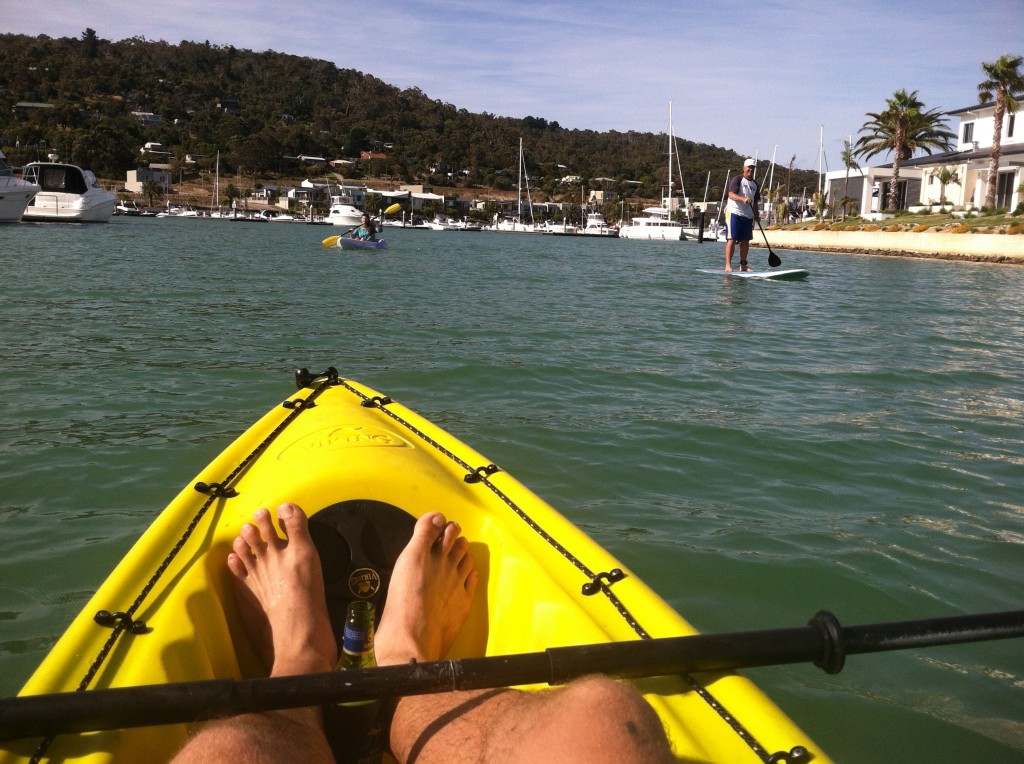 We also got to do some paddleboarding, which was a lot of fun. Unfortunately, it was super windy on the day that I tried this, so I spent about 75% of my time in the water. 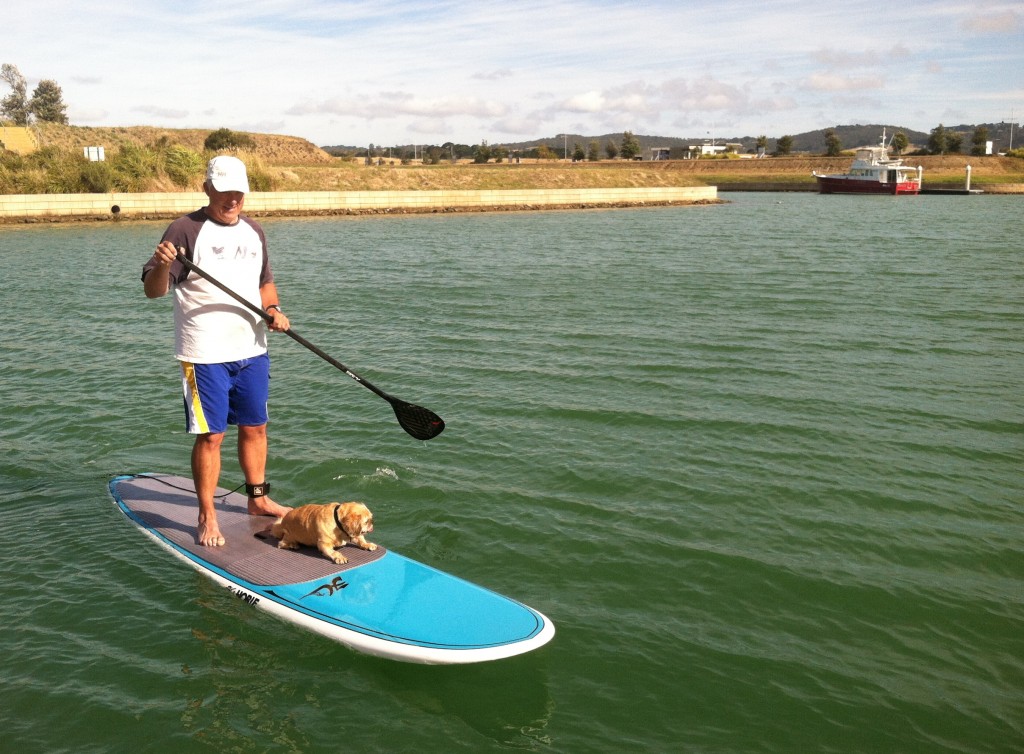 We took a trip up to Melbourne the day before New Years, and it quickly earned it’s spot as one of my favorite cities. The architecture was awesome, the streets seemed very clean, and the street performers blew away the ones we have here in Venice, CA. 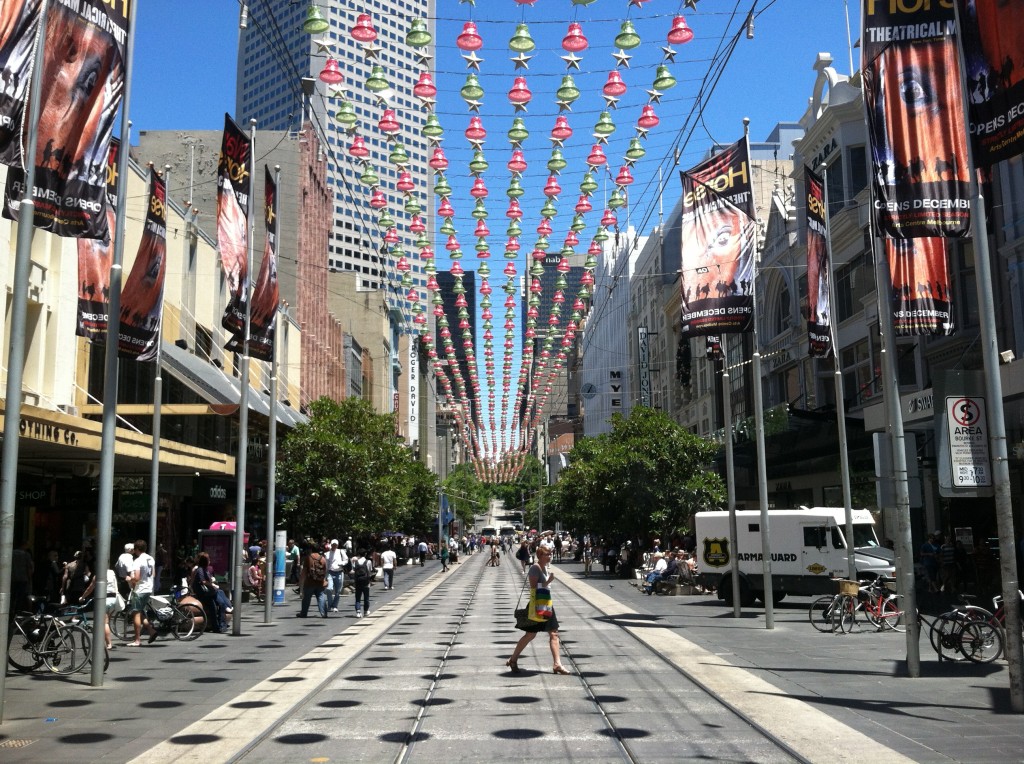 As you can see, we did get to travel around a bit, but we spent most of our visit in Mount Martha. A lot of the surrounding area in the Mornington Peninsula (Arthur’s Seat, Red Hill) is vast and undeveloped. We went to a national park (Mornington Peninsula National Park) at sunset to check out some kangaroos. 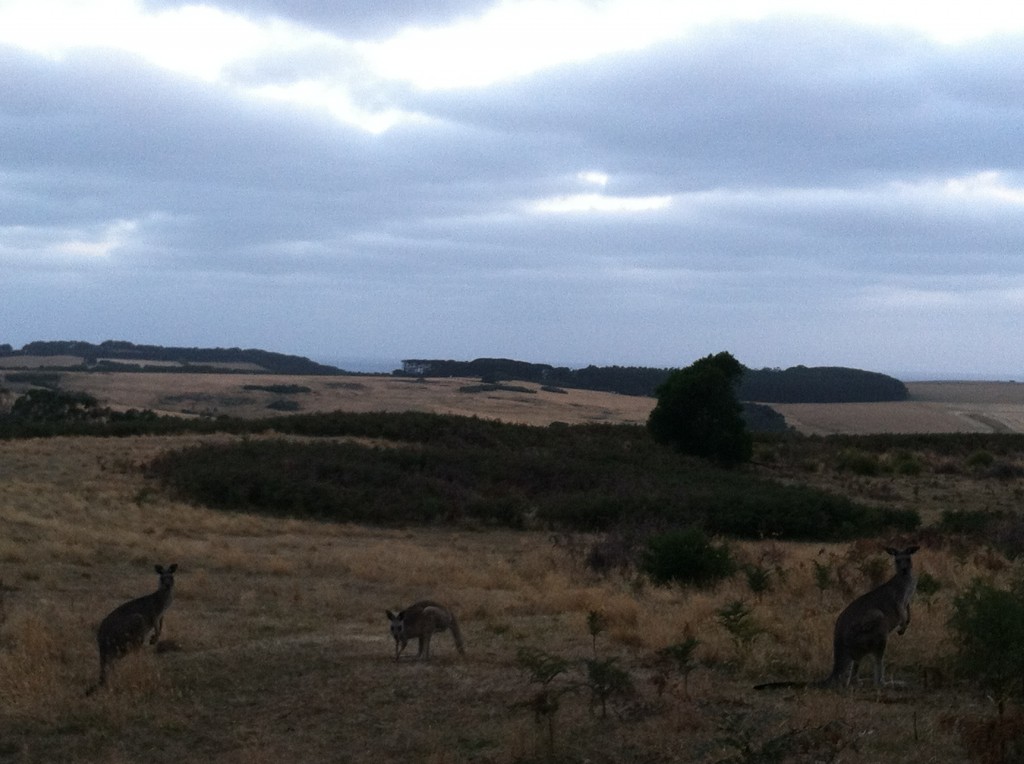 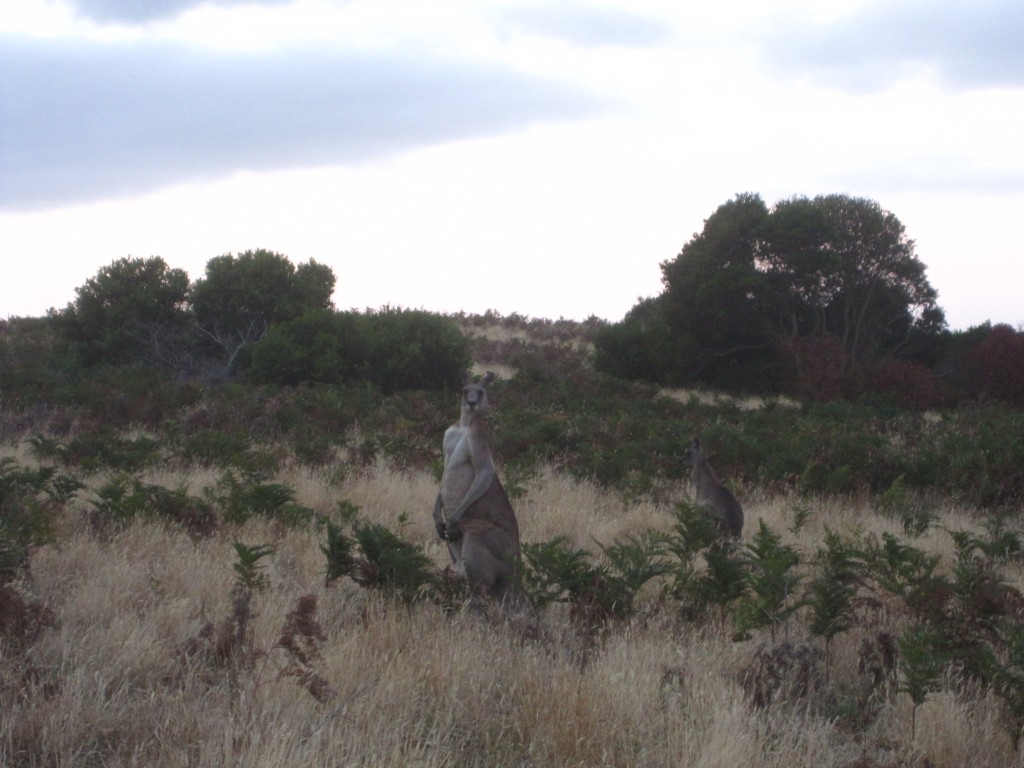 It didn’t take too long for me to realize that you can get pretty close to these kangaroos before they start to move away. In true ignorant tourist fashion, I was trying to get up really close to a group (or “court”) of these unfamiliar creatures so that I could get a good photo. All of a sudden, a huge one stood up, puffed his chest out, and started hopping towards me. He made his message pretty clear, so I backed off – I’m pretty sure I’m no match for a 150 lb kangaroo.

As for the Mornington region as a whole, it is a peninsula that spans about 100 miles below MElbourne, and obviously there’s no shortage of beautiful coastline with clear blue water. 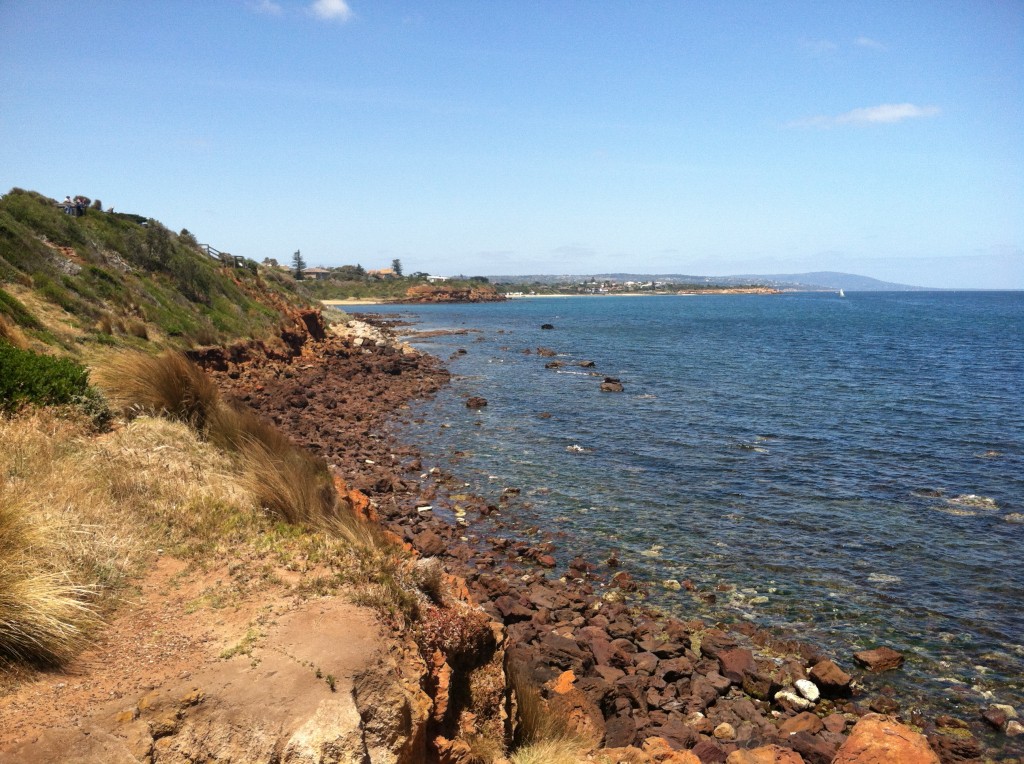 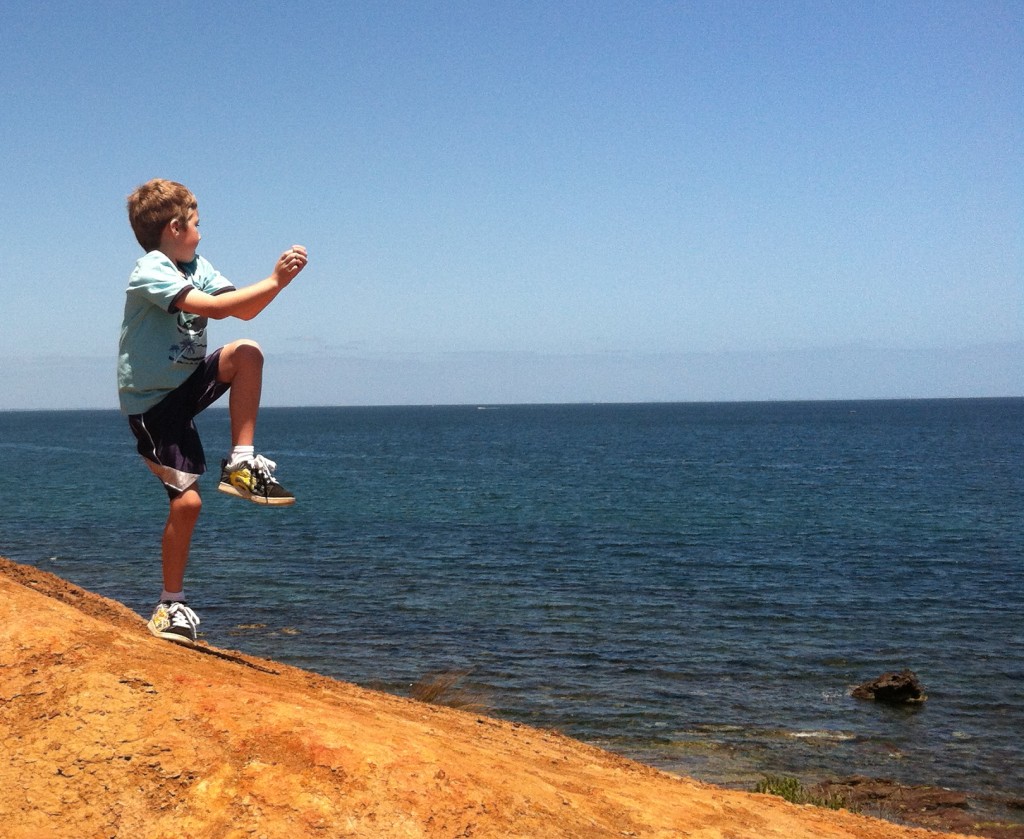 The peninsula itself is farm areas, orchards, and wine country. There are many beautiful winding back roads through rolling green hills, connecting the numerous wineries and art galleries tucked away all over the place. 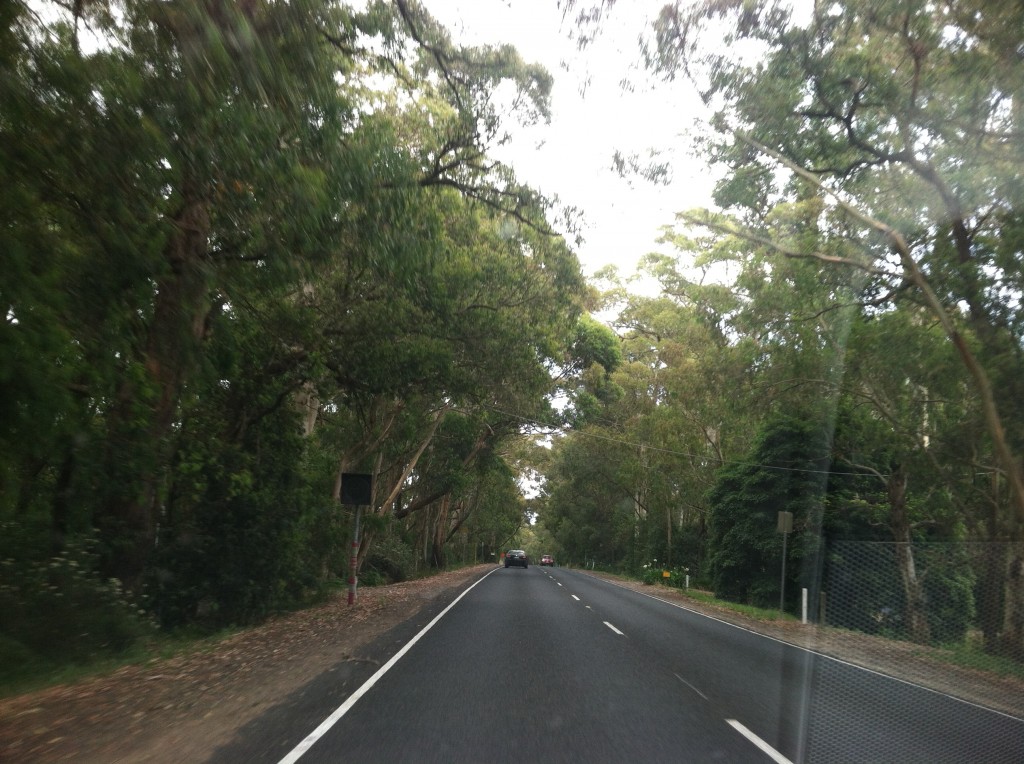 We spent an afternoon visiting a few of these wineries. Chardonnays are big in the region, and while I’m not big on white wine, exploring some of the vineyards and doing wine tastings was pretty fun. 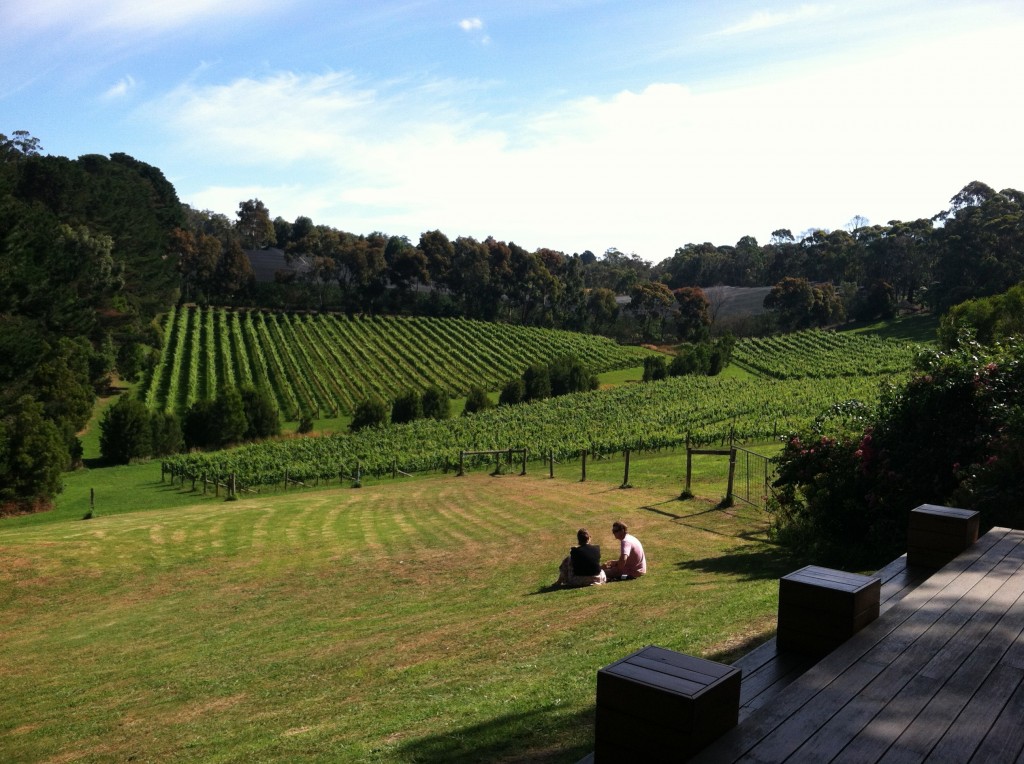 The vineyard behind Foxey’s Hangout 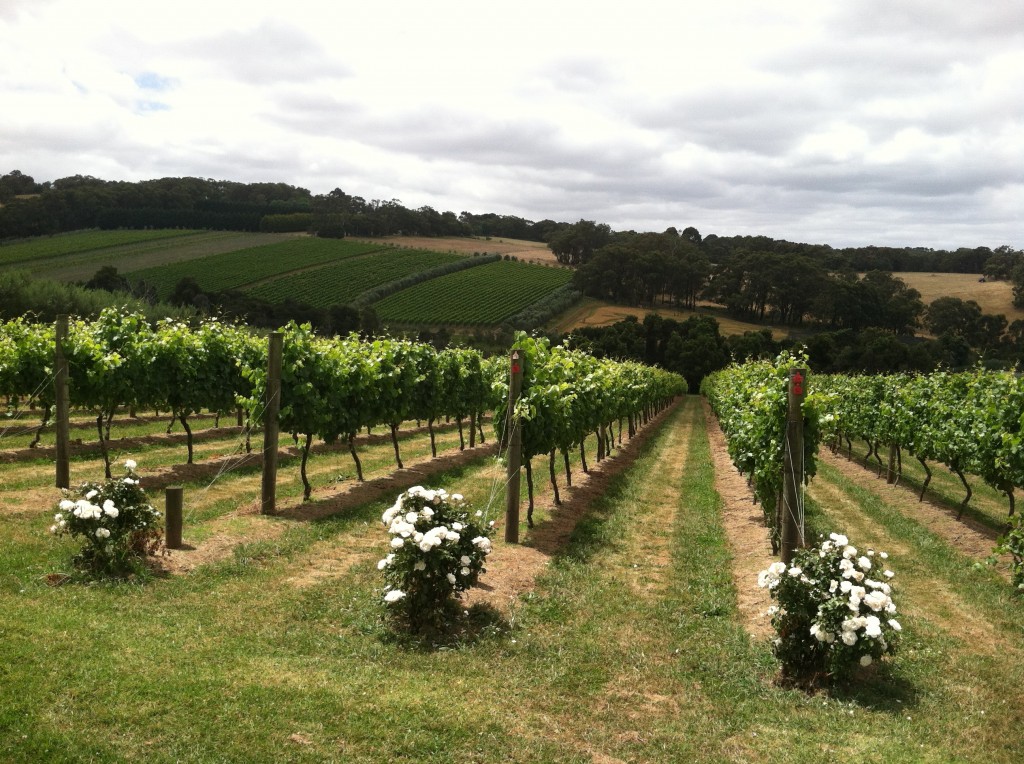 While on the subject of alcohol… Everything seemed to cost an arm and a leg in Victoria, booze included. I was so blown away by the price of a 6 pack that I felt the need to provide photographic evidence. 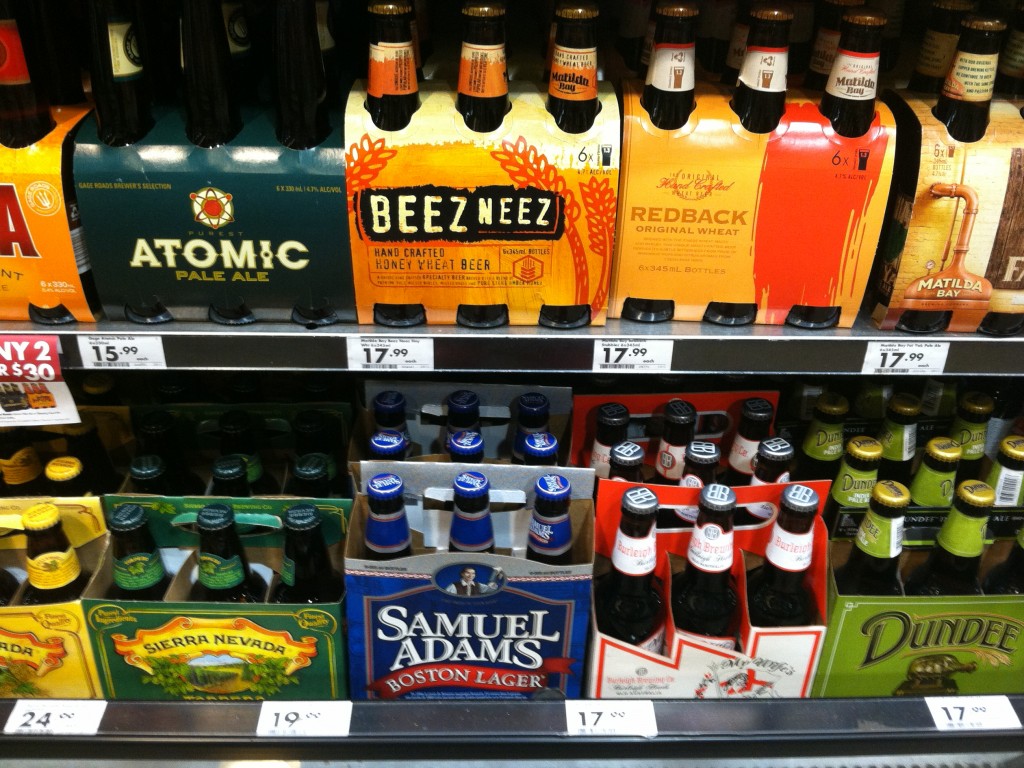 That’s a $25 six pack in the corner! A case of beer (or a “slab”, as they call it) wasn’t any cheaper. $42 for a case!? Crazy. And the alcohol is traditionally a lower proof.  If I lived in Australia, my weekends would certainly involve less drinking… Or I’d brew my own, I suppose. 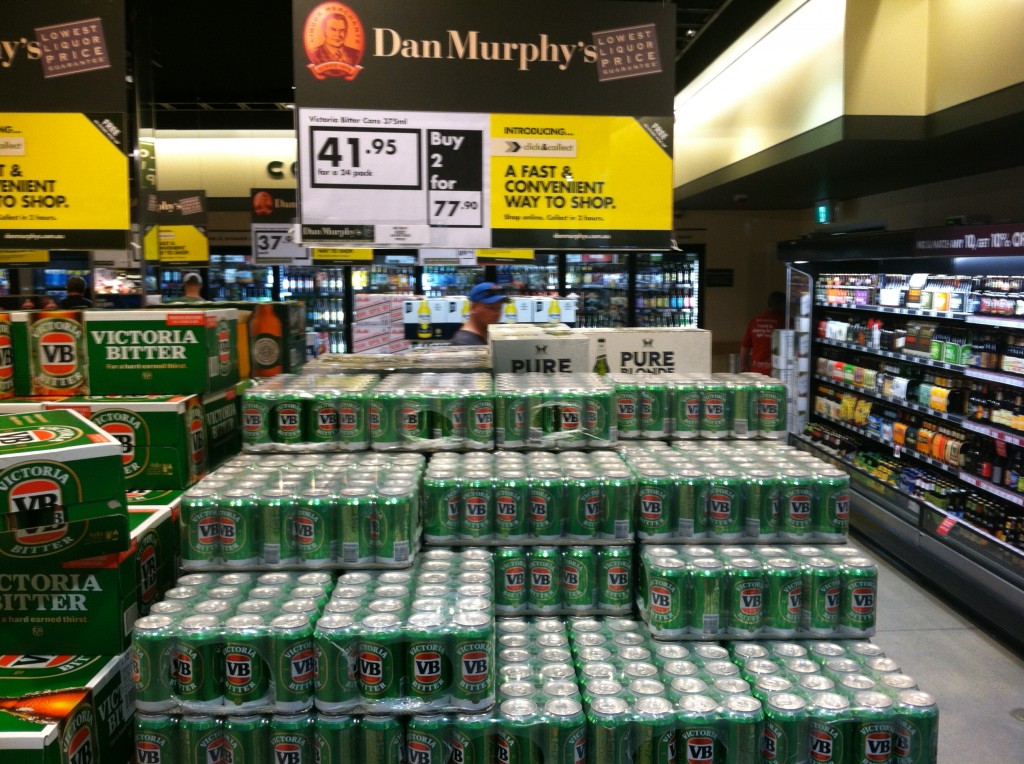 I got a kick out of some of the slang used on billboards and in ads there. Unfortunately, I wasn’t on top of my game in regards to taking pictures of this stuff, but here’s one that struck me as pretty nonsensical. 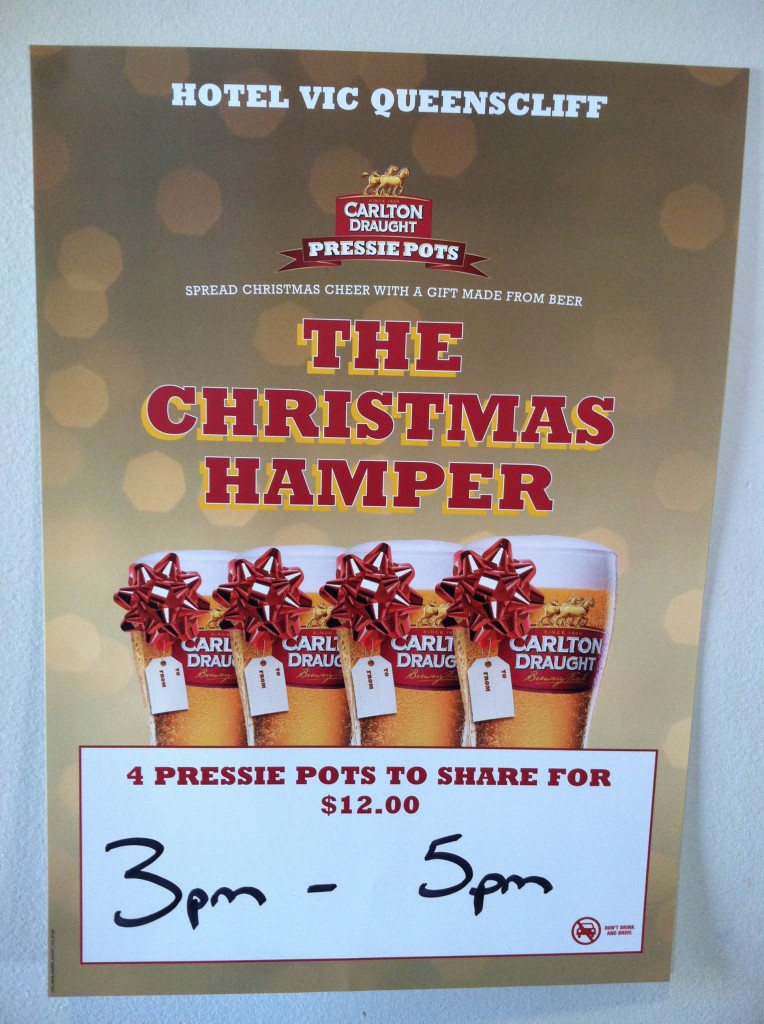 The Christmas Hamper? Pressie pots? WHAT!?

I’m running out of photos here, but I can’t overlook one of my favorite parts of Australia… 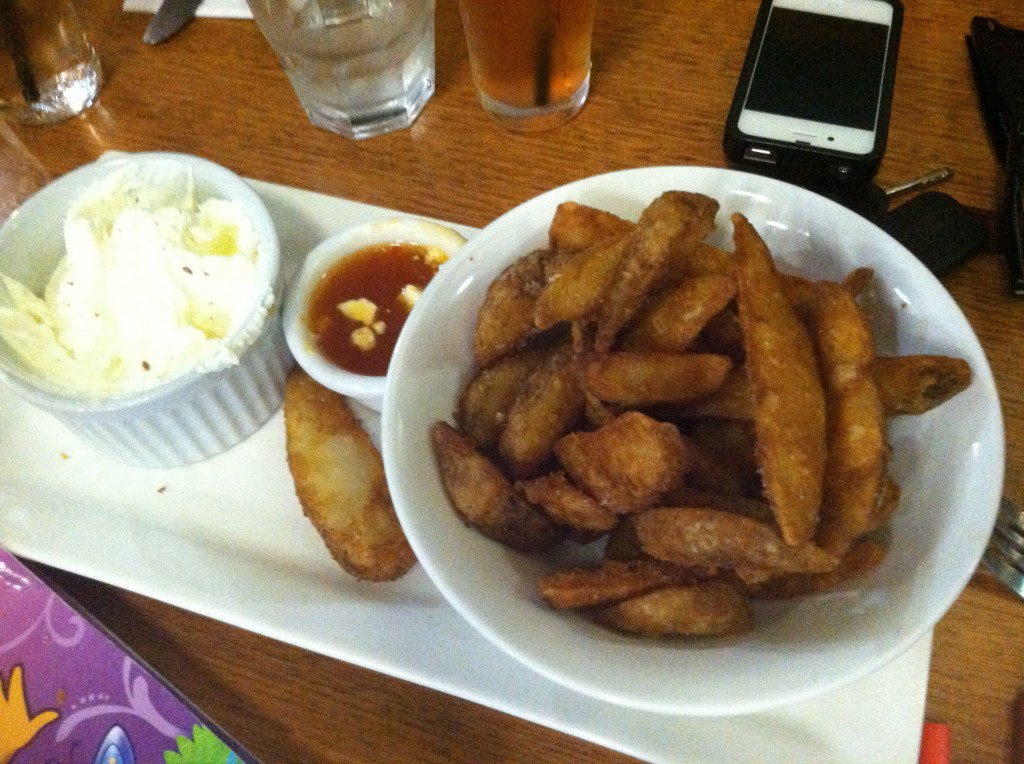 Potato wedges! They’re served with sour cream and sweet chilli sauce, and most restaurants/bars seem to have them. It seems to be one of the go-to bar foods there, but I don’t think I’ve ever seen this in the US. The combination is amazing.

Anyway, the trip was a lot of fun, and was pretty relaxing (for the most part). There were 12 of us staying under one roof – well, under one roof and one mast. And I’m not quite used to traveling with kids (3 young, rambunctious and noisy ones at that). Needless to say  it can be a bit hectic at times, but it also made the trip a lot more fun in different ways. 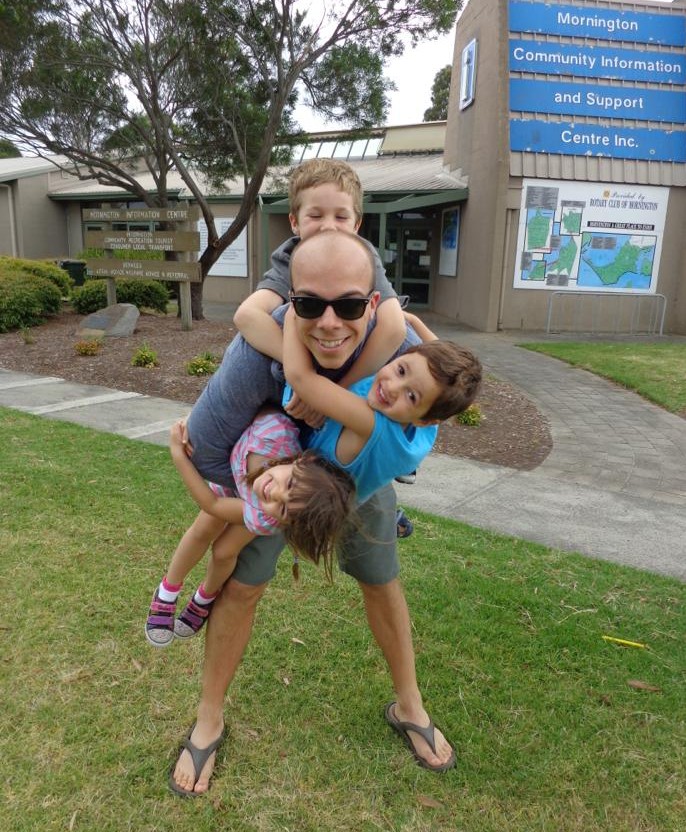 While we were there, Lauren’s mom told me about RV relocation programs, where you pick up an RV in the off season and return it to it’s original rental destination. And as long as you get it to the drop location by a certain date, it’s super cheap, as you’re essentially doing the company a favor. I’d love to go back to Australia and explore this option, as it’d be an awesome way to see the country.

So that’s my Australia trip in a nutshell. Thanks for reading!