This change favors videos that are watched for the longest periods of time, and was seemingly done in attempt to cut down on YouTube “spam” – videos with misleading thumbnails, YouTube “reply girls”, etc.

Over the past few years I’ve uploaded quite a few videos to my YouTube account, and I’ve been keeping an eye on my Analytics since the announcement was made.

Here’s a screenshot of the total views across all of the videos in my account over the past 30 days:

As you can see, the change went into effect on March 14th.

The following video clip (orphans in Ghana playing with baby mice) gets the majority of the views on my YouTube channel. It’s 15 seconds long, just broke 7 million views, and has fantastic audience retention:

Now let’s take a look at how the views on this particular video have dropped over the past 30 days. 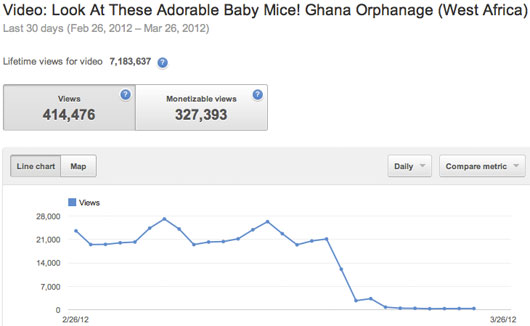 That’s a pretty serious drop. For comparison, let’s take a look at the audience retention on another video – this one’s about building a fire without matches or a lighter, and it’s roughly 3 minutes long.

The audience retention on that one isn’t nearly as impressive. However, it hasn’t seen nearly the same type of drop as that first video did: 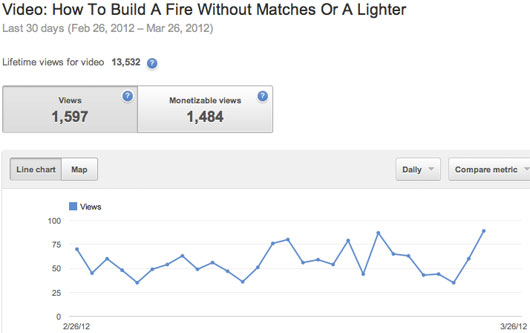 Here’s another video, some concert footage of The Disco Biscuits. This one is almost 11 minutes long. As you can see below, the retention is nothing to write home about:

Again, we’re not seeing any real drop in views here… 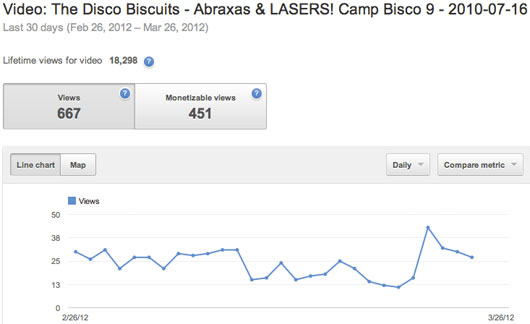 So what do you think – is this algorithm tweak a change for the better? YouTube may have struck a blow to the “reply girls” and people who ride the coattails of popular videos with junk content, but at what price? Does this help to improve the overall quality of YouTube?

Is a 15 second long video inherently less valuable than a 10 minute long video? Will this change force people to create longer videos with “filler” at the beginning/end just for the sake of being included in “suggested videos”, even when the video itself only needs to be 10-20 seconds long? Food for thought.